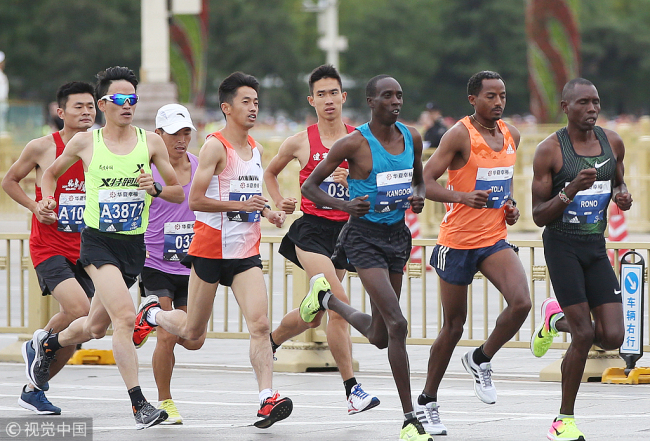 Ethiopia's Dejene Debela Gonfa and Valary Jemeli Aiyabei of Kenya both enjoyed a comfortable sole lead in the latter stages to claim the men's and women's titles respectively at the 2018 Beijing Marathon on Sunday.

The 23-year-old Gonfa seized the sole lead after 20 kilometers and led all the way to the finish line with a winning time of two hours, 12 minutes, eight seconds. It was the second title notched by Gonfa this year in China as he also took the victory at the Xiamen Marathon in January.

China's Li Zicheng is the fastest local runner. He clocked 2:15:53 to finish fourth.

Commpared with Gonfa, Aiyabei was even more dominant in the women's race as she wrapped up the win with an advantage of more than five minutes. With a winning mark of 2:21:38, Aiyabei became the first Kenyan female champion in the 38-year history of the race.