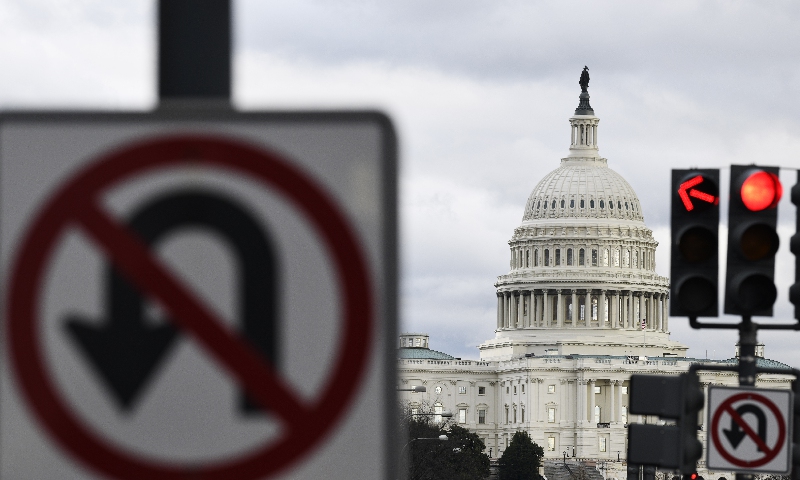 Red lights and No U-Turn signs are seen in front of Capitol Hill in Washington D.C., the United States, on Jan. 24, 2019. (Photo:Xinhua)

In the latest round of increasingly frequent attempts by US politicians to "score points" by provoking China over the Taiwan question ahead of the midterm elections, Republicans introduced their own version of the highly provocative "Taiwan Policy Act 2022," which is more radical and dangerous than the version approved by Senate Foreign Relations Committee two weeks ago.

Analysts said that as the current House minority, some Republican lawmakers have tried to use their version of the Taiwan Policy Act to put pressure on Democrats and speed up the progress of the legislation. But at the same time, it also shows that there are indeed some pragmatists among Democrats who are concerned over the damage the bill will do to China-US relations.

Along with 36 other House Republicans, Michael McCaul, Republican leader of the House Foreign Affairs Committee, introduced the House minority's version of the Taiwan Policy Act of 2022 on Wednesday.

According to VOA, the Taiwan Policy Act introduced by GOP House representatives retained and restored some highly sensitive requirements in the original version, including a requirement that the US increase strategic clarity in "defending Taiwan" and designate Taiwan authorities as a major "non-NATO ally."

Republicans, the minority party in the House of Representatives, came up with a new version of the bill to further hype the Taiwan question, and apparently to pressure Democrats in Congress and the White House to speed up the passing of the bill before the midterm elections, Diao Daming, an associate professor at the Renmin University of China in Beijing, told the Global Times on Thursday.

"I don't think it means that the Democrats, who have a majority in the Congress, are interested in passing this bill quickly," Diao said. "If the Democrats want the legislation to be achieved as soon as possible, it should be the Democrats that introduce a House version, which is different from the reality."

But it does show that some members of the pragmatic wing of the Democratic Party are concerned about being so loud and provocative in damaging China-US ties, Diao noted.

Senior Colonel Tan Kefei, spokesperson for China's Ministry of National Defense, expressed strong opposition to and condemnation of a series of recent US acts that infringe upon China's sovereignty and territorial integrity, including the Taiwan Policy Act and arms sales, at a press briefing on Thursday.

Some people in the US have violated the one-China principle, reneged on their political commitment to China on the Taiwan question, and strengthened military ties with Taiwan island's DPP. These provocative actions are very dangerous and do great harm, Tang said.

We urge the US side to end military links with the DPP authorities, or bear the resulting serious consequences, Tan added.

Despite the belligerence of the US lawmakers in drafting the Taiwan Policy Act 2022, experts say that procedurally, there is limited time for the bill to complete its legislative process before the midterm elections.

If more Democrats join the Republicans, the bill is likely to be taken up in the House, followed by bipartisan, House-Senate negotiation. If there is no reaction from the Democratic majority, the bill will just sit there and the Senate version will go to the House Foreign Affairs Committee, where it will be reviewed and amended, and another long process of bipartisan, House-Senate negotiation will ensue, experts said.

However, experts warned of the risks that lawmakers defeated in the election may be more likely to be driven by "special interests" to do risky things for the sake of their legacy. As for the possible winners, they may also do something extreme in the next two months on the Taiwan question in order to meet their own interests.

Although November 8 is the date set for the midterm elections, lawmakers who lose will have to leave office by January 3. If the legislative process for the Taiwan Policy Act is not completed by this date, the next Congress will have to go through the whole process of proposal, review and approval all over again, Diao said.