Government and schools swing into action to tackle obesity in youngsters 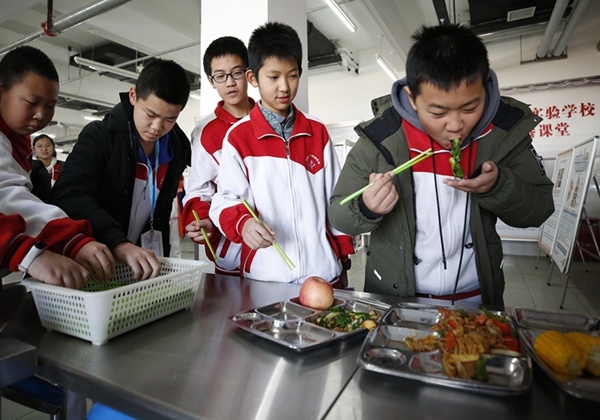 A nutrition class in a school in Shunyi District, Beijing, on December 20, 2019. (Photo: Xinhua)

Last year, Beijing resident Xiaoming was diagnosed with high blood pressure and blood sugar. These have come to be considered as part and parcel of professional life in today's high-pressure world but the trouble was, Xiaoming was a 12-year-old in junior high school.

Already overweight, he gained more weight during the epidemic, contributing to his health woes. A large part of it was attributed to schools remaining closed last year due to the epidemic and students attending online classes from home. Xiaoming seldom played any outdoor sports and the burgeoning weight finally made his parents worry.

He was taken to a doctor, who said the boy needed to change his sedentary lifestyle. Then his father made an exercise plan for him, which included running outdoors, and father and son exercising together. The new regimen started last June and Xiaoming lost an impressive 10 kg. When he went back to school in autumn, his classmates could hardly recognize him.

Overweight and obesity have become an increasingly serious issue among youngsters in China. According to a report on nutrition and the chronic diseases of the Chinese released by the National Health Commission (NHC) in December, 19 percent youngsters between 6 and 17 were overweight; for those even younger, the figure was 10.4 percent.

According to Yao Hui, a doctor at the endocrinology department of the Wuhan Children's Hospital in Hubei province, central China, there were hardly any overweight children decades ago. But now the phenomenon has become increasingly common.

Yao told Wuhan Evening News in the past parents came to consult him on how to make their children eat more because they considered slender children to be weak. Now they come to ask how their children can lose weight. Every year, he examines several hundred overweight children.

"Children who don't have enough exercise are more likely to be overweight because they burn up too little calorie," Ma Jun, head of the children and adolescent health research institute of the School of Public Health at Peking University, told People's Daily. He added that many children spend a lot of time watching TV and using electronic products such as laptops and smartphones without any exercise, which leads to obesity.

Researchers worldwide agree that with every hour spent watching TV, children run a greater risk of obesity as well as diabetes. Gao Shan, an endocrinologist at the Beijing Chaoyang Hospital, told People's Daily that obese children and adolescents are more susceptible to high blood pressure, high blood sugar and hyperlipidemia—an abnormally high concentration of lipids or fats in the blood.

Among her child patients, some have high blood pressure at the age of 10 and some diabetes at 13. Gao said obesity can also result in either precocious puberty or development retardation and psychological problems such as self-abasement and unwillingness to socialize.

One of her patients in 2019 was a 16-year-old overweight girl who had high blood sugar and hyperlipidemia. Gao found Xiaomei loved sweets and had no control when it came to eating. To make things worse, her indulgent parents gave her extra meals.

She made a step-by-step dietary and exercise plan for the teen. "First, she would have to stop eating so many sweets and you would have to stop giving her extra meals," Gao told the parents. She also helped them get a therapist to teach the teen how to exercise. The treatment and exercises made Xiaomei lose 15 kg. Since then, she has been following a healthy diet and exercising regularly.

A healthy diet is key to keeping fit. Parents should ensure the food children eat does not have too much fat, salt or oil. Snacking and soft drinks should be cut down, Gao said.

Yan Jie, a doctor with the nutritional department of Beijing Children's Hospital, said many children are overweight because of their unhealthy diet, which contains too much meat, oil and sugar.

In November 2020, the nutrition department of Beijing Children's Hospital and the General Administration of Sport of China jointly held an online weight loss campaign to teach children and parents how to choose the right diet and exercise.

Children who signed up for the program have all lost weight and their health indicators have returned to normal.

The Hunan Children's Hospital in Changsha, Hunan province in central China, has been holding a weight loss summer camp for children between 8 and 14 since 2003. Those who sign up have to undergo 14 days' closed training during which they have to follow dietary and exercise plans by medical experts. The program is said to enable participants to lose 5 kg on average.

"In addition to helping children lose weight, the campaign has also made them develop healthy habits so that they can continue to do sports and follow a healthy diet after returning home," Zhong Yan, head of the Institute of Children Health at Hunan Children's Hospital, told People's Daily.

Gao suggests that parents monitor their children's weight closely. If found overweight, they should be taken to a doctor as soon as possible. Ma's suggestion is introducing basic nutrition and exercising in the curricula of kindergarten, primary and middle schools to help children develop a healthy way of life at an early age.

In October 2020, six ministries including the NHC and the Ministry of Education released a detailed plan for prevention and control of obesity among children and adolescents with a directive for school canteens. It said the canteens should increase the proportion of fruits, vegetables and coarse grains in meals and include the correct amount of fish, eggs, meat and milk. Food that is high in sugar, fat and salt should be axed.

Liu Meichen, a student of the Baijiazhuang Primary School in Beijing, told Beijing Review her school has asked students to record their weight, height and body mass index every week during the winter vacation, which will last till March 1. It has also issued a list of the sports students are required to do every day, including running and skipping.