A pair of disposable chopsticks, a plastic candy wrapper, a train ticket, orange peel, a ripped plastic bag that held the orange, a sticker tag, an apple pit, tissues...

The list above details the garbage generated by Wang He on April 25, when she took part in a week-long activity called the Zero Plastic Challenge, launched by Mr. Elephant, a public account on WeChat that focuses on environmental issues.

The activity, designed to promote a reduction in the consumption of single-use plastic products, required participants to post a list of the garbage they produced every day as a means of raising their awareness of plastic, or "white", pollution.

"I never buy plastic wrappers or garbage bags at the market. When my family members go shopping, we take plastic bags from home to hold vegetables such as green beans which can't be weighed if not wrapped," said Wang, a 43-year-old painter from Beijing.

Wang became aware of the hazards of plastic products when she was in college; her cat enjoyed biting plastic bags, but often vomited after doing so. That was when Wang realized that "plastic must be a bad thing".

She is one of a growing number of Chinese who are rejecting single-use plastic products after becoming aware of the environmental harm they cause.

However, even if Wang could reduce her use of plastic bags by five a day - about two kilograms of plastic per year - it would still only equal a tiny portion of the 75 million metric tons of plastic that was consumed in China in 2016. 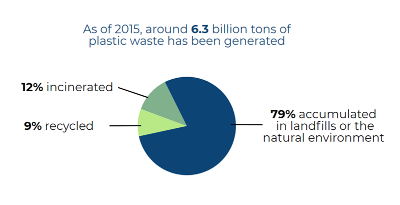 Ten years ago, to fight worsening pollution and energy waste caused by the rampant use of plastic bags, the State Council, China's Cabinet, banned marketplaces, including supermarkets, food markets and shopping centers, from providing customers with free bags, and outlawed the use of bags less than 0.025 millimeters thick.

The ban, which took effect on June 1, 2008, has curbed the use of plastic bags in marketplaces. 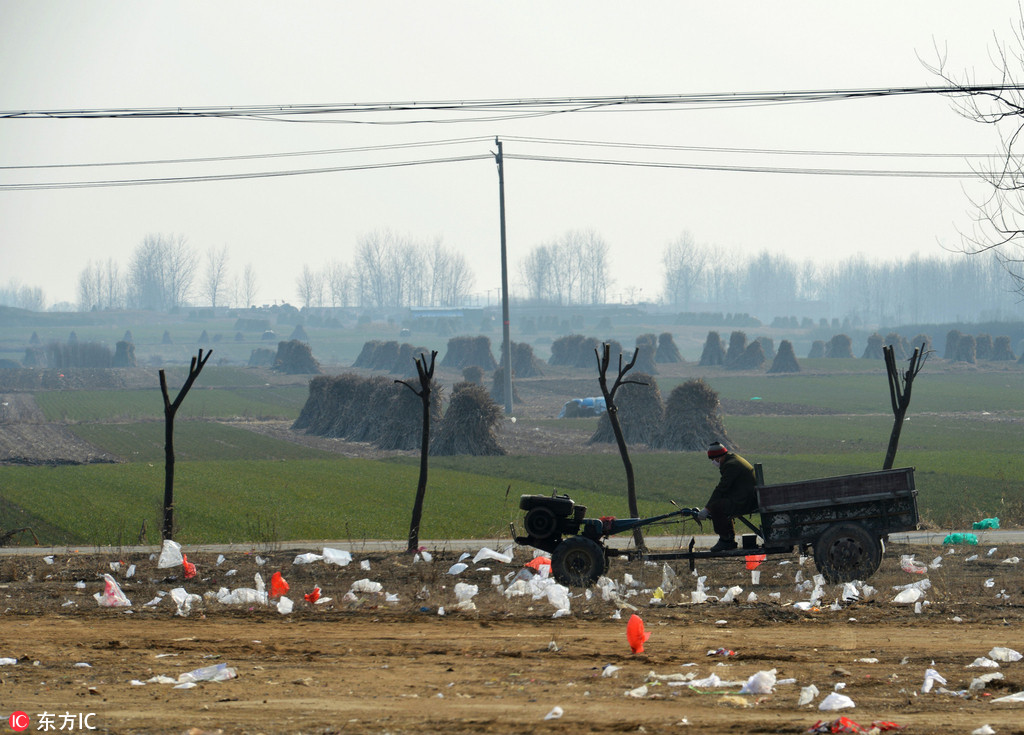 Plastic bags are littered at a village in Langyang, Shandong province. [Photo/IC]

In the first seven years after the ban was adopted nationwide the use of plastic bags at supermarkets and shopping centers fell by more than 60 percent, according to data from the Environmental Protection and Resource Conservation Department of the National Development and Reform Commission. The reduction in use equaled 1.4 million tons, equivalent to 8.4 million tons of oil, the major constituent of all forms of plastic.

The introduction of a "paid-use" policy, where customers pay for bags, signaled that they come with a price and rewarded people who do not use them, according to Mao Da, founder of the Zero Waste Alliance, an environmental NGO.

According to a 2008 survey of consumers, following the introduction of the ban, 70 to 80 percent of consumers brought their own bags when shopping, and if they did use plastic bags, the number was reduced considerably.

Despite the positive effect of the ban, authorities were criticized for not carrying the policy through after its initial success.

"The ban on plastic bags has resulted in a reduction in their use in the past 10 years. However, the policy lacks clear and measurable targets," Mao said.

He cited two reasons behind the waning effect of the ban: a lack of continuous efforts to raise people's awareness of environmental protection; and the declining psychological effect of the paid-use policy on consumers because of the relative cheapness of plastic bags. To better implement the ban, Mao called for stricter law enforcement and increased attention by the media and the public.

Last year, Yao Jia, founder of an environmental NGO called Bichumei Studio, led a survey to investigate compliance with the rules governing the use of plastic bags at 211 food markets in 22 cities nationwide. 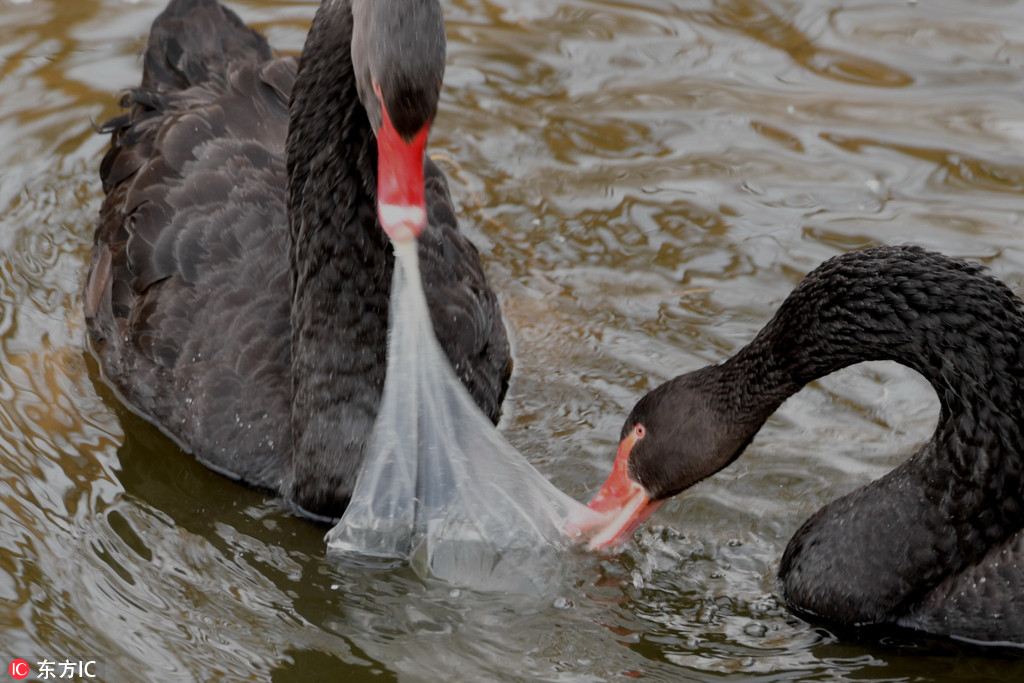 Two swans bite a plastic bag in a park in Beijing. [Photo/IC]

The findings showed that 42.6 percent of the markets used plastic bags that did not comply with the required standards of thickness and recyclability.

Yao said most stall owners in food markets welcome the paid-use policy because they save money by not giving bags to customers free of charge, but they also fear losing custom to competitors who run open-air stalls and do not charge for bags.

To solve the problem, Yao suggested that machines should be installed at markets to dispense bags that meet the standards.

She said one of the major reasons for the plastic bag "epidemic" is low awareness of the pollution they cause, and the fact that consumers do not know which alternatives are safe to use.

To clarify the situation, her studio produced posters that outlined the alternatives and posted them at food markets, where they were welcomed by authorities supervising the implementation of the ban.

Sun Wei, an amateur researcher on plastic pollution, supports a complete ban of single-use plastics because every time he sees someone using a plastic bag, he is worried by the "waste of the precious resource of oil".

He suggested a tax on plastic products, from bottles made from polyethylene terephthalate, known as PET, and shopping bags to plastic wrappings and packaging, and said subsidies should be granted to producers of multiple-use alternatives such as glass bottles and cloth bags.

In a suggestion submitted to the NDRC, Sun called for the cautious use of biodegradable plastic bags, because "they can only degrade in a compostable environment and most end up in landfills where they cannot biodegrade".

Mao backed Sun's suggestion of a zero-waste lifestyle, believing that the crux of the white pollution problem lies in the "single-use consumption culture", which is bolstered by the convenience and cheapness of plastic products.

"Turning to other types of materials to replace plastics will not solve the problem," he said.

According to findings published in the journal Science Advances in July last year, in the past 50 years only 9 percent of the plastic waste generated has been recycled, with 12 percent incinerated and the other 79 percent buried in landfills or dumped illegally. 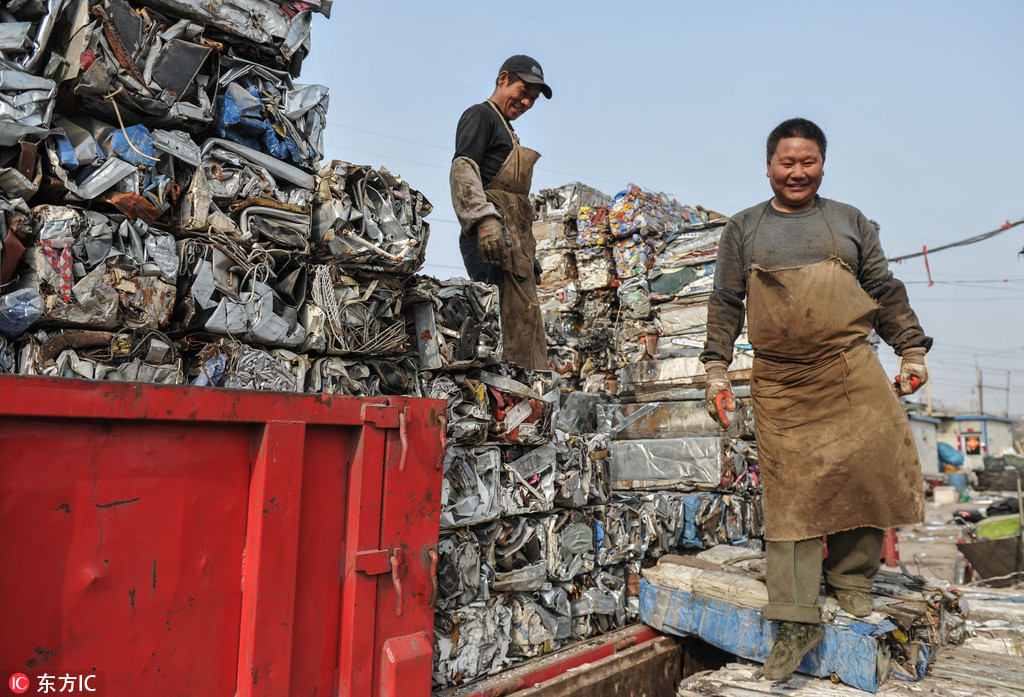 Mao would like to see more action being taken. "We should ban the unreasonable use of plastic products in online shopping and food delivery services, and find substitutes for plastics," he said.

"There are many kinds of plastic products. Some are relatively easy to recycle, such as polypropylene and polyethylene, and some are more difficult, such as polystyrene and polyvinyl chloride (PVC), so we should use them less."

Mao called for reform of the waste recycling system to encourage the recycling and recovery of plastic products.

"In the past, we had a vast waste recycling network formed by self-employed people, but in recent years, they have been driven away from large cities such as Beijing by the falling price of recycled materials and by policies that put workers in the lower-end industries at a disadvantage," he said, referring to the armies of "scavengers" that once scoured street bins to collect plastic waste to sell to recycling plants.

According to Chen Liwen, who spent years researching the lives of scavengers in Beijing, about 30 percent of the waste produced in the capital is recyclable.

Recyclable waste was collected and sorted by scavengers in residential communities before being transported to recycling markets - most of them family-run - in the suburbs, where it was further sorted, she said.

The system evolved in the late 1980s during China's transition to a market economy when waste disposal ceased to be the exclusive duty of local governments and became a private concern.

Most of the sorted waste in Beijing was sold to workshops in nearby provinces such as Hebei and Shandong for disposal, Chen said, adding that at the peak of private waste recycling in the capital in 2014, the informal sector provided work for nearly 300,000 people.

In the years that followed, however, nearly half of the scavengers left the city and many suburban waste sorting and trading plants closed because of the falling price of materials and a squeeze on labor-intensive industries.

The workshops outside Beijing have also suffered. In recent years, efforts to curb air pollution in North China have led to the closure of many small waste recycling businesses in Hebei that did not meet discharge standards. 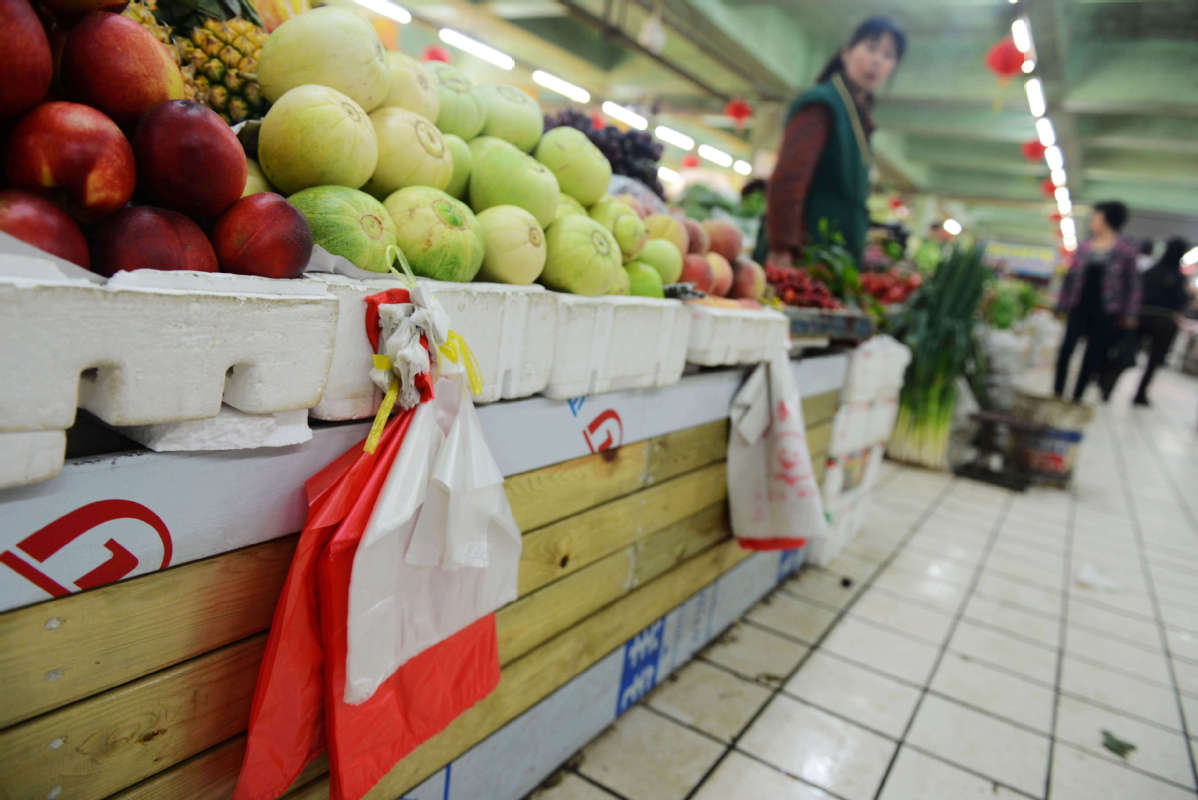 In 2013, five years after the ban, a market in Shandong province was still providing plastic bags that did not comply with national standards. [Yu Fangping for China Daily]

As a result, recyclable waste is piling up in landfills.

With the private recycling sector feeling the chill, fewer people are willing to sort waste, resulting in a lower rate of recycling, according to Chen.

"In the past, people would sort plastic bottles, papers and other recyclables at home and sell them to collectors, but now many people just throw them directly into the trash can," she said.

She added that to raise the recycling rate of usable waste, policies will have to be implemented to support sorting facilities and recycling plants via favorable approaches to taxation and land use.

Chen also called for the integration of the sanitation and resources recycling networks.

However, the separation of duties increases the chances of waste ending up in landfills and incineration plants, rather than being recycled and reused, she said.

Speaking in November, He Lifeng, head of the NDRC, said the commission would widen the scope of the plastic ban and work with other departments to formulate plans to curb the use of nonbiodegradable plastic wrapping in ecommerce, express delivery and online food ordering services. The commission also pledged to strengthen enforcement. In January, the NDRC started the process of creating a national plastic pollution control policy.

Qu Ruijing, an expert at the China Association of Circular Economy, said the principles are aimed at increasing the use of recyclable and biomass-based biodegradable products, and wider adoption of other recyclable materials, which would finally begin to address the problem of white pollution in China. 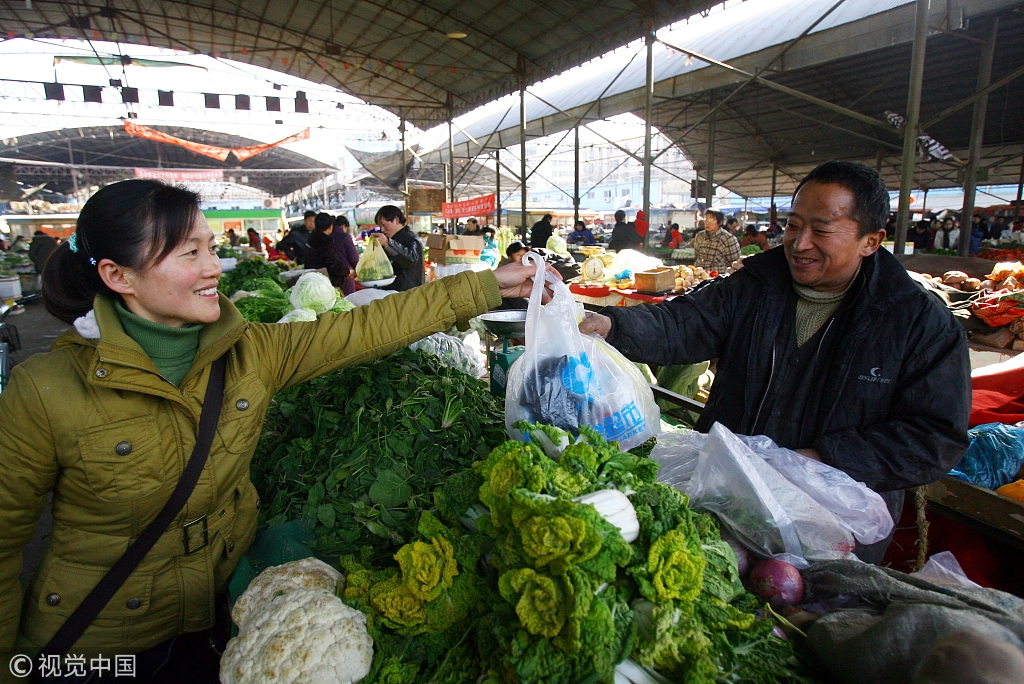 A teacher gives plastic bags she collected to a stall owner at a food market in Zhengzhou, Henan province. [Photo/VCG]