Govt pushes to pay off money owed to businesses, migrants

China will work to ensure that government departments and State-owned enterprises clear their undisputed arrears owed to private and smaller businesses as much as possible by the end of this year, and resolute efforts will be made to see the task through, the State Council's executive meeting chaired by Premier Li Keqiang determined on Wednesday. 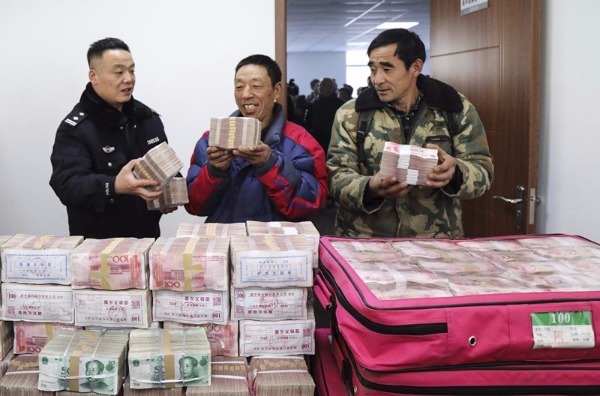 "Much work has been done to tackle this problem over the past year," Li said. "There must be no letup. This problem is primarily about wage payments that departments and SOEs owe to private companies, small and medium-sized enterprises and migrant workers. It has directly affected the government's credibility, the business environment, expectations of private businesses and people's lives."

It was noted at the meeting that as of the end of last year, some 75 percent of the more than 890 billion yuan ($128 billion) of the arrears identified nationwide had been paid, exceeding the original target of making no less than half the delinquent payments in 2019.

Supervision from higher levels of government and public scrutiny will be applied to repayments of large sums, it was decided at the meeting. Provincial governments have overall responsibility for the payments and must formulate plans for any cities and counties that are unable to complete the task, ensuring that no arrears are left unaddressed. Large State-owned enterprises must coordinate with their subsidiaries to make sure the late payments are made.

Going forward, when it comes to construction projects, sufficient capital will be allocated and issued on time in accordance with contracts for wage payments to migrant workers, it was determined. Governments at all levels, and State-owned enterprises－and public institutions in particular－must not fall into arrears on payments to migrant workers for any reason, it was decided.

"New government officials must not be allowed to disavow obligations undertaken by their predecessors," Li said. "Undisputed arrears must be paid off by the end of this year."