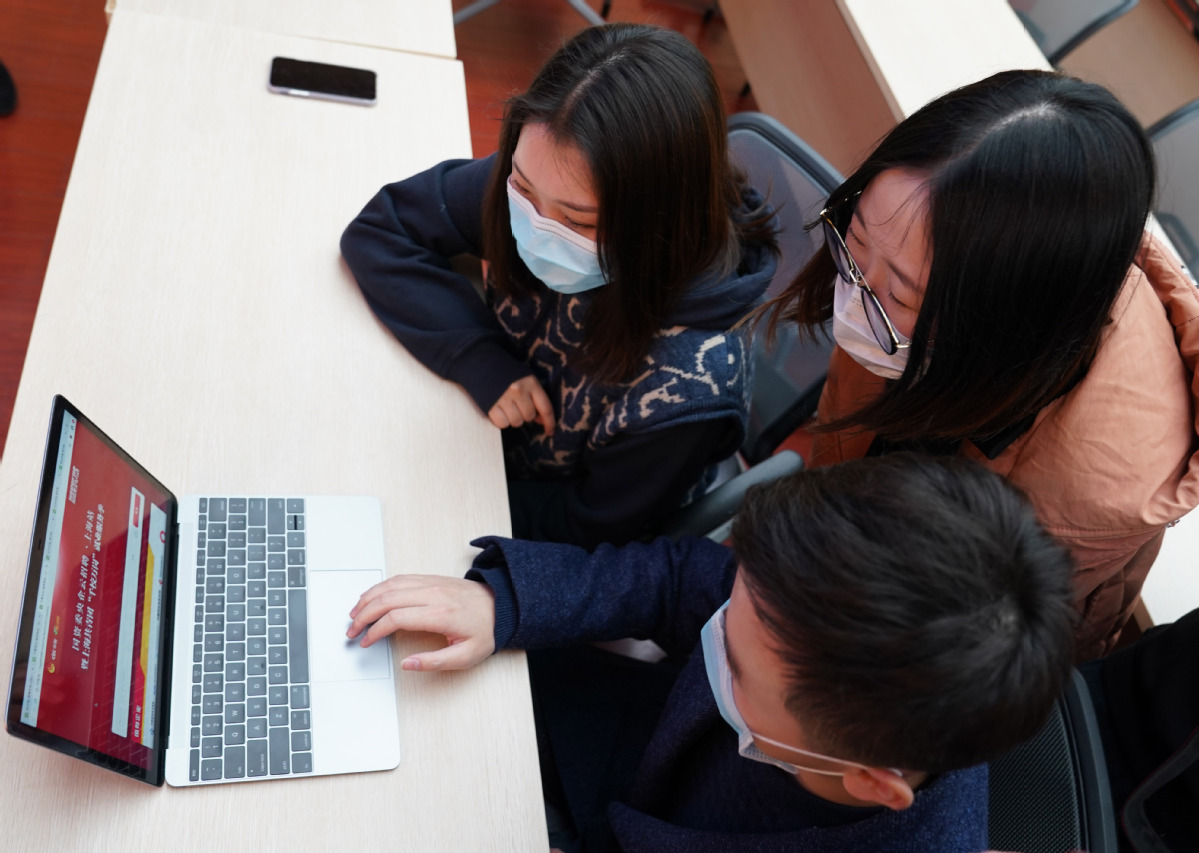 Job seekers search for openings on a cloud platform in Shanghai on March 12. (Photo: Xinhua)

The central government is endeavoring to stabilize employment and help companies to minimize losses caused by novel coronavirus pneumonia, a senior official said at a news conference organized by the State Council on Wednesday.

"Stabilizing hiring this year is quite arduous because of the epidemic," You Jun, vice-minister of human resources and social security, said at the conference.

You said that the central government has stressed an employment-first policy and is stepping up efforts to arrange for migrant workers to go back to work and help college graduates find jobs.

He said that encouraging people and businesses to resume work is a top priority as most districts and counties are classified as areas with low risks of infection.

"We have to streamline procedures to facilitate work resumption and make breakthroughs in sectors including manufacturing, construction, logistics, services and agriculture to help stabilize hiring and the economy," he said.

"The government will simplify procedures for program registration and exempt security deposits for those programs," he said. "Also, some industrial zones funded by the government will open free to key groups."

"We will also give great support to flexible employment as we've seen many workers earn their living through some online platforms amid the epidemic," he said.

Stabilizing employment of some key groups such as migrant workers and college graduates is of great importance to social security and the nation's economic development, according to You.

"The population of college graduates this year will be as high as 8.74 million, and they will face greater challenges in finding jobs due to the coronavirus," he said. "Previously, months like March and April were best for job seekers. We released these preferential policies in a bid to ease pressure on the graduates."

According to You, the government will give subsidies to small and medium-sized enterprises if they recruit college graduates. Further, State-owned enterprises are required to expand recruitment campaigns in the next two years.

More vacancies will be available to graduates at the grassroots, and college students are encouraged to join the army, he said.

As for migrant workers, You said the government is helping them get back to work through chartered buses and trains to secure their health, and it's organizing online job fairs to help them find employment.

You emphasized preferential policies are being established for workers and companies in Hubei province, the area hardest hit by the novel coronavirus pneumonia.

"Discrimination against job seekers from Hubei is also prohibited," he said.

You said that human resources authorities had announced about 250,000 positions for college students in the province by Saturday and arranged for about 239,800 migrant workers to get to work through chartered buses and trains.

"More people and companies are resuming work, and we believe employment will get better in the near future," he said.