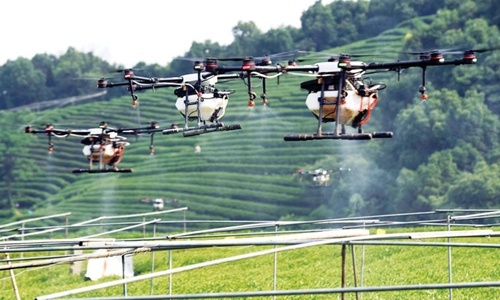 China has reiterated the importance of grain safety in the 2021 Government Work Report, delivered on Friday by Chinese Premier Li Keqiang, and vows to put ensuring people have enough food as a top priority for the government. China will strive to make key technological breakthroughs in agriculture.

China will ensure stability in the supply and prices of agricultural products and launch food-saving initiatives. Ensuring that Chinese people have enough food remains a top priority for our government, the Chinese premier said.

To ensure a grain output of over 650 million metric tons is also listed as one of the main projected targets for development this year, according to the work report.

"Seeds and cropland are crucial for safeguarding China's food security. China will strengthen the protection and use of germplasm resources and the breeding and application of fine crop varieties, and strive to make key technological breakthroughs in agriculture," said Li.

The emphasis on agriculture also comes as China's central government unveiled the "No. 1 document" for 2021 on February 22, renewing its emphasis on the country's rural area and agricultural sector. As the first policy statement released by China's central authorities each year, the document is seen as an indicator of policy priorities. Work on agriculture and rural areas has been high on the agenda for 18 consecutive years.

Over the past year, the problem of rising food prices that plagued the world seems to be intensifying. The COVID-19 pandemic has affected the food supply chain, paralyzed transportation and ultimately increased global food prices, highlighting the demand for the world's second-largest economy to strengthen self-reliance in grain supply.

The renewed focus on agriculture and grain safety in the work report showed the country's top policymakers will continue its efforts and revitalization in the rural areas, Li Guoxiang, a research fellow at the Chinese Academy of Social Sciences, told the Global Times on Friday.

"The standards for maintaining high-quality farmland will be raised, and irrigation facilities will be improved. We will enhance the protection of cropland and resolutely stop any attempt to use it for purposes other than agriculture and specifically grain production," said Premier Li.

Agricultural belts for national food security will be developed. Subsidies for grain growers will be maintained, and minimum purchase prices for rice and wheat will be increased as appropriate. Pilot insurance programs covering total production costs and incomes will be expanded. Grain acreage will be kept stable, per unit crop yield will be increased, and the quality of grains will be raised, read the work report.

In an interview on the sidelines of the two sessions on Friday, Minister of Agriculture and Rural Affairs Tang Renjian said that China hopes to "turn the table" in the seed industry in 10 years.

"We are working with relevant departments to study and formulate an action plan, make key technological breakthroughs, and keep the core provenance in our own hands," Tang said.

The minister also noted that China's grain production maintained 17 consecutive harvests. Food consumption has been above the international food security standard of 400 kilograms per capita for many years, adding that China's food security is fully guaranteed.