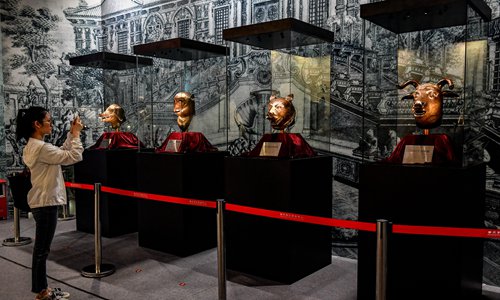 A visitor takes photos of four of the 12 bronze animal heads looted from the Old Summer Palace by foreign troops, on August 8. The bronze animal heads, temporarily displayed in Zhaoqing, South China's Guangdong Province, represent the animals of the Chinese zodiac. (Photo: VCG)

By connecting a series of cultural relic thefts that happened in European museums together and using leading questions, the New York-based men's magazine GQ implied in an article that the Chinese government is a "buyer of the stolen cultural relics."

In the article published on August 16, writer Alex W Palmer tried to prove that the State-run conglomerate China Poly Group and some Chinese elites devoted to bringing back stolen or lost relics to China are "cooperating with the Communist Party of China."Jiang Yingchun, the general manager of Poly Culture Group, said the GQ report's attempt to link cultural relic theft cases with China's efforts to bring back its lost treasure is "nonsense."He told the Global Times in an exclusive interview that the Poly Culture Group "will reserve the right to take legal action against GQ."

GQ: Who gave the orders?