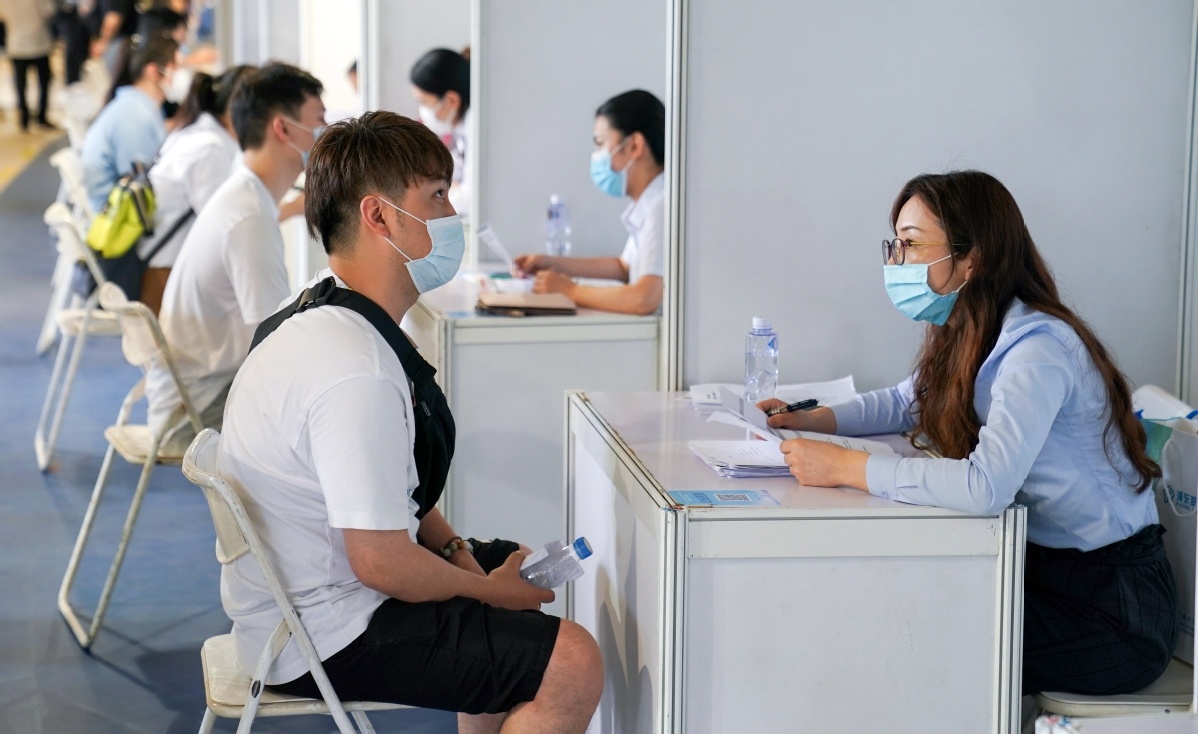 Graduates are interviewed at a job fair in Pudong New Area, Shanghai, in June. (Photo: Xinhua)

More college graduates in China are opting to pursue higher degrees to improve their employment prospects, according to the Chinese 4-Year College Graduates' Employment Annual Report (2020) issued on Thursday.

The report said 15.2 percent of college graduates last year chose to pursue master's degrees at domestic universities after graduation, up 1.7 percentage points from 2015.

College graduates preparing to take the annual national postgraduate studies exam after graduation accounted for 4.5 percent of the total in 2019, up by 2.4 percentage points from 2015, it said.

Meanwhile, college graduates who chose to work after graduation decreased from 77.3 percent in 2015 to 73.5 percent last year, the report said.

The report found that 52 percent of college graduates decided to pursue master's degrees to improve their employment prospects.

Employees who graduated from colleges in 2014 and obtained master's degrees within five years earned on average 10,408 yuan ($1,490) per month, compared with an average of 9,683 yuan for those with bachelor's degrees, it said.

The job satisfaction rate for graduates with master's degrees after five years of employment was 79 percent, compared with 73 percent for those with bachelor's degrees.

The percentage of high vocational school graduates who continue to study for a bachelor's degree increased from 4.7 percent in 2015 to 7.6 percent last year, while those who started working after graduation was down from 86.4 percent to 83.7 percent during the same period.

The report was based on a survey of 274,000 graduates from 30 provincial regions. It was released by MyCOS, an education consulting and research institute in Beijing.

A record 8.74 million college graduates graduated from the country's higher education institutions this year, and they have faced more challenges in finding employment amid the COVID-19 pandemic.

The country plans to increase the enrollment of students for postgraduate studies by 189,000 this year and bachelor's degree programs will strive to admit an additional 322,000 vocational college students compared with last year, according to the Ministry of Education.

Tang Chenggang, a recent graduate of Beijing Jiaotong University, said he will continue postgraduate studies at the university in September as a bachelor's degree no longer guarantees a decent job.

"Many of my classmates have also chosen to pursue higher degrees as it has become common knowledge that a master's degree today has the same effect as a bachelor's degree a decade ago in helping students land a good job," he said.

Xiong Bingqi, deputy director of the 21st Century Education Research Institute, said as the country aims to increase the enrollment of vocational colleges by 1 million this year, this means the college enrollment rate will be more than 90 percent, with around 10 million out of the 10.71 million high school graduates being able to go to college.

"As higher education becomes more accessible to students, colleges should adopt stricter standards, and weed out those who are unsuitable for further studies," he said.