CHINA Graphics: Macao's economic takeoff over the past 20 years

Graphics: Macao's economic takeoff over the past 20 years

This year marks the 20th anniversary of Macao's return to the motherland. The Macao Special Administrative Region (SAR) witnessed a remarkable economic growth.

Macao's GDP surged from 51.87 billion patacas (6.4 billion U.S. dollars) in 1999 to 440.3 billion patacas in 2018, an increase of eight times more, according to data from Statistics and Census Service of Macao SAR government. 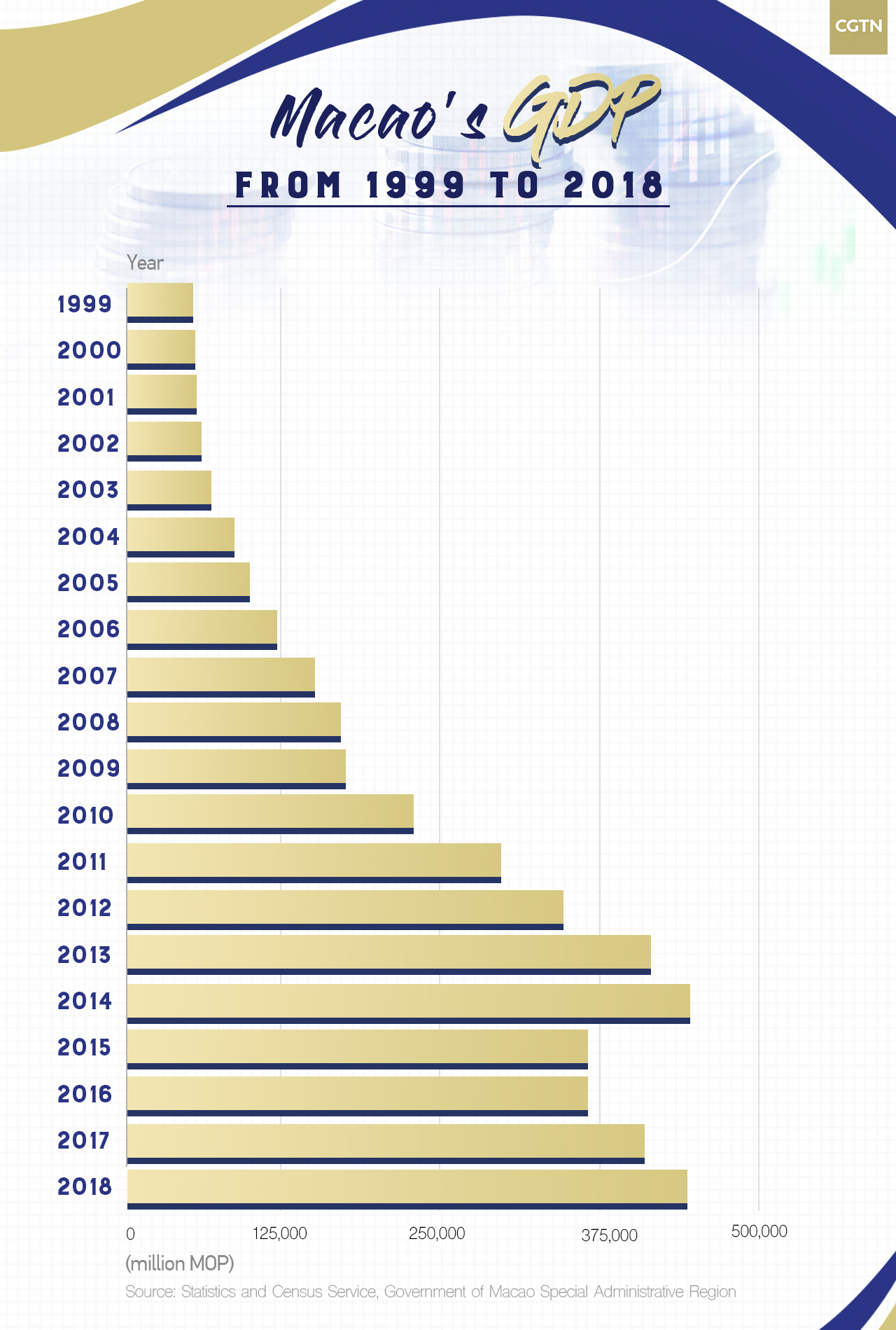 The SAR has enjoyed a stable socio-economic development under the principle of "One Country, Two Systems," and embraced fresh business opportunities both from the Chinese mainland and foreign countries over the years.

In addition,as a bridge connecting the Chinese mainland and Portuguese-speaking countries, Macao plays an indispensable role in trade facilitation, cultural exchanges as well as reform and opening-up. Meanwhile, the region is now tapping new opportunities in the Greater Bay Area, bringing its role as a tourism hub into full play. 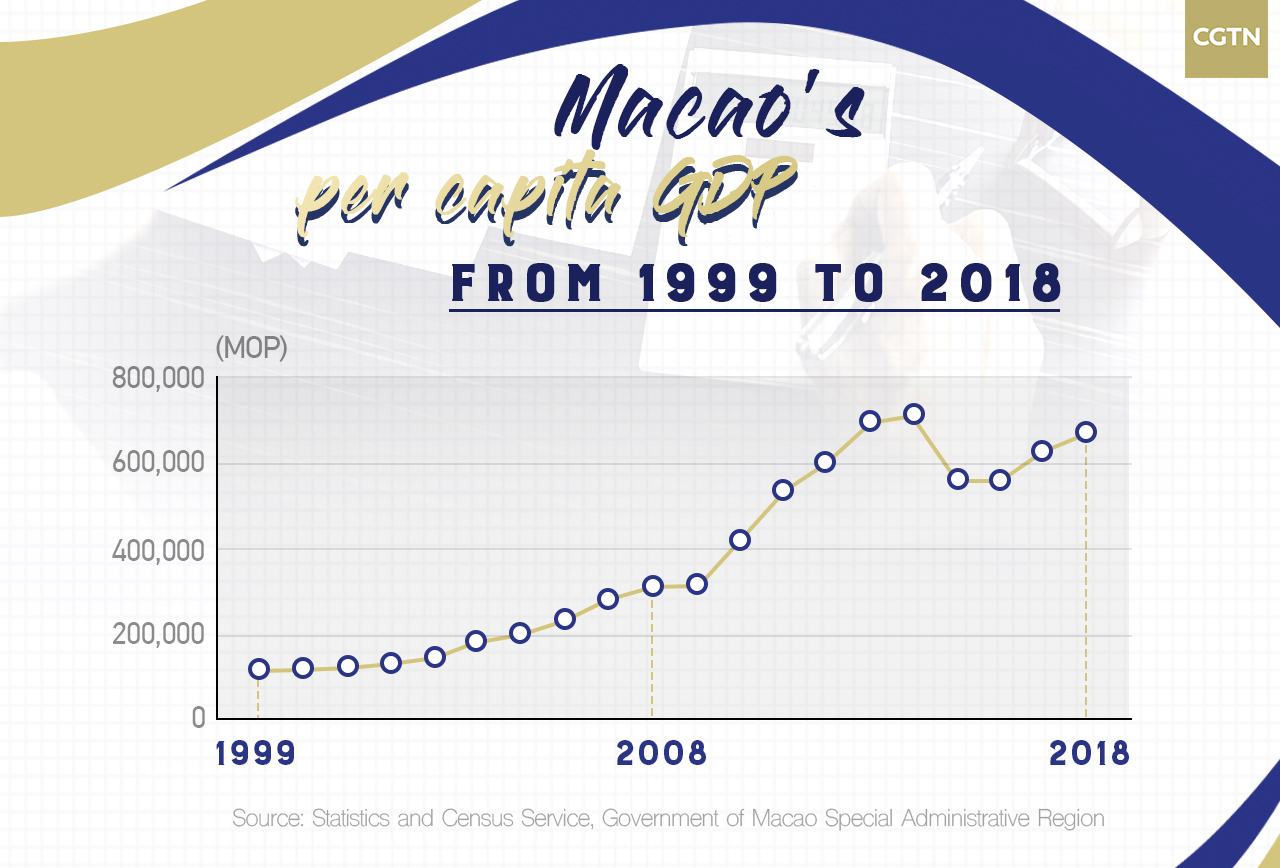 Business cooperation between Macao and the Chinese mainland has been flourishing, supported by a series of facilitation measures introduced by the central government. 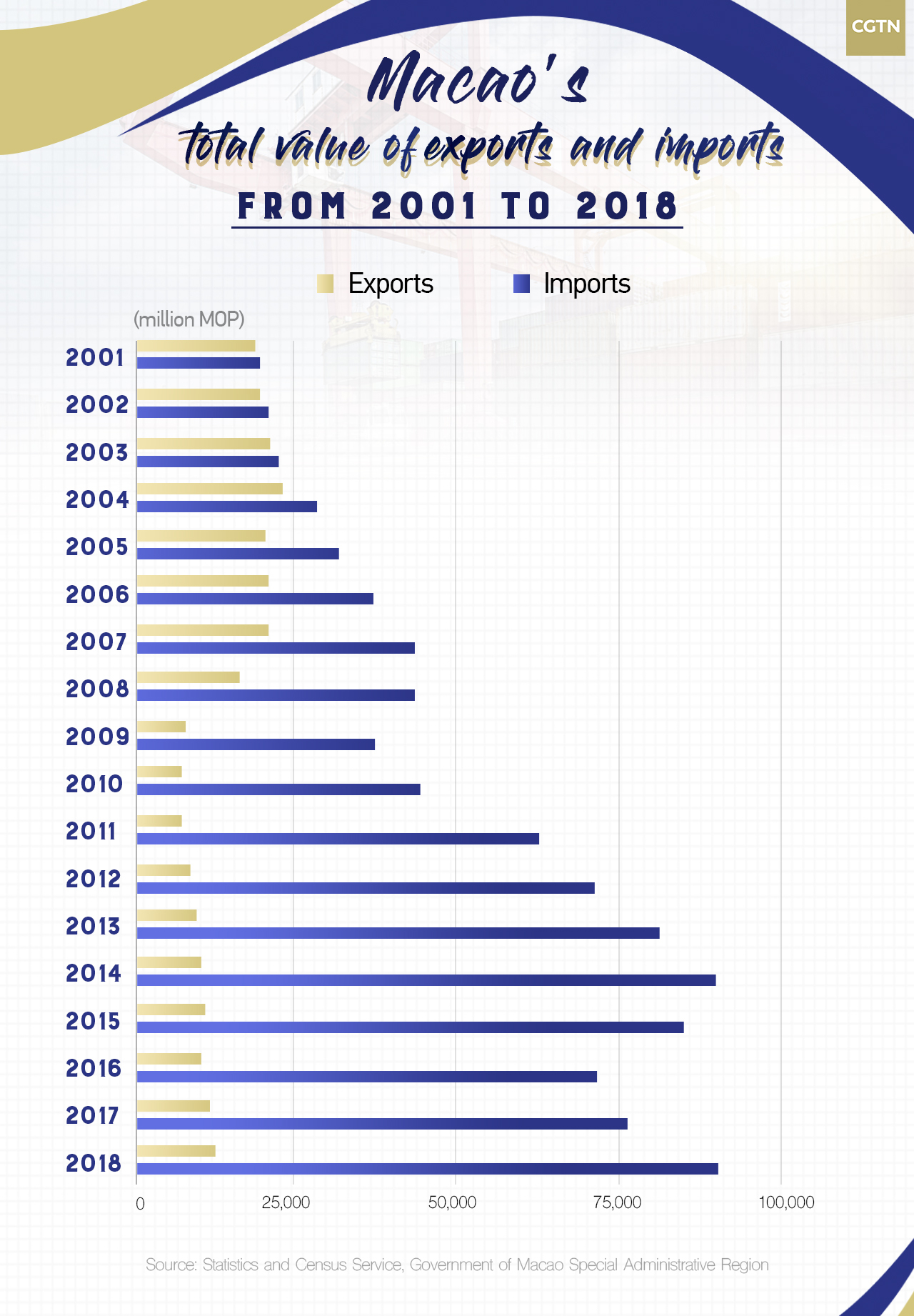 Chinese Mainland and Macao signed Closer Economic Partnership Arrangement (CEPA) in 2003 to facilitate trade cooperation. Under CEPA, goods from Macao that comply with the mutually agreed rules of origin can enjoy zero-tariff treatment upon importation into the Chinese mainland.

In December 2018, an agreement on trade in goods under the framework of CEPA was signed between Chinese mainland and Macao, symbolizing the completion of comprehensively upgrading the CEPA. In November this year, a revised agreement of CEPA was inked and will be implemented on June 1, 2020. 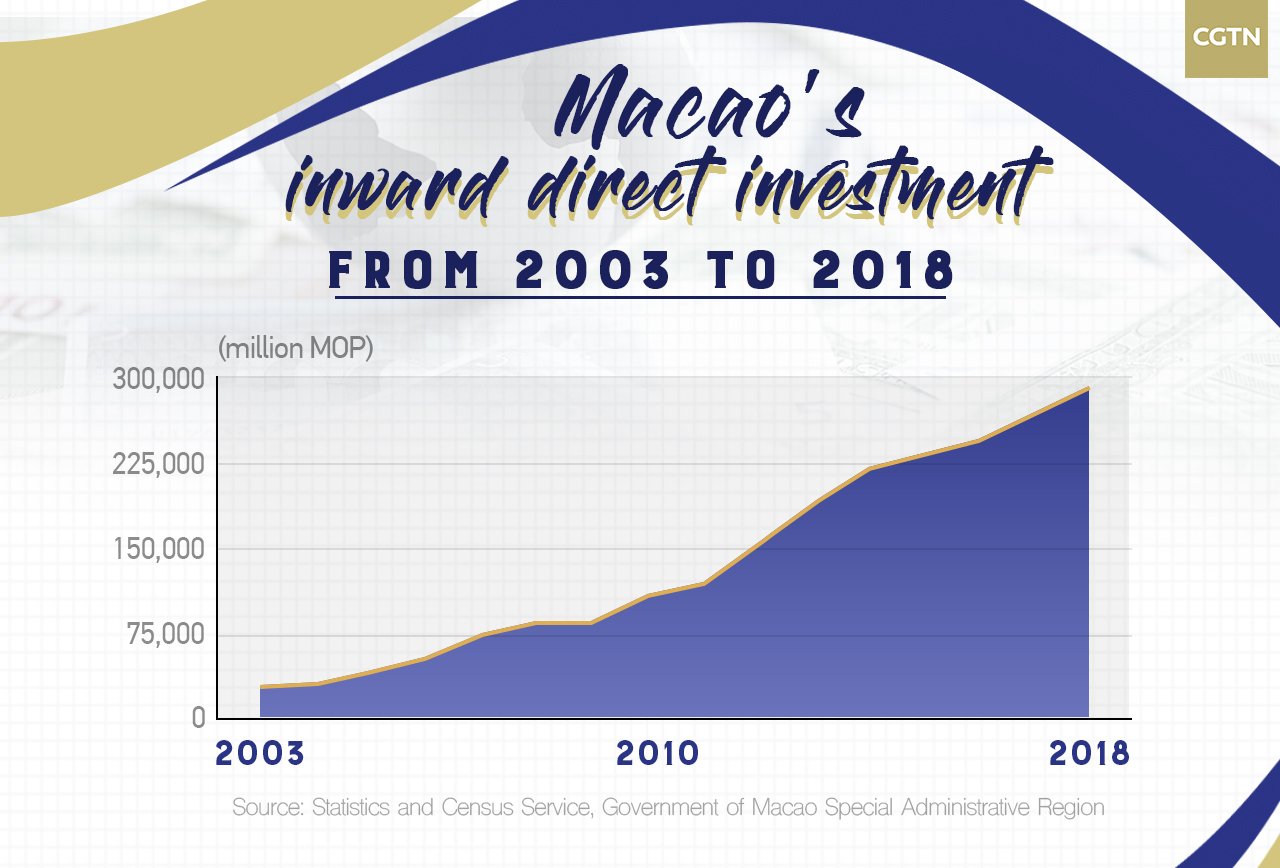 Between January and October this year, the value of goods exported to the Chinese mainland from Macao with zero tariffs reached 73.3 million patacas, a 40-time increase from the 1.836 million patacas when CEPA took effect in 2004.

The MOFCOM said the central government will continue to work with the Macao SAR to diversify Macao's economy, support Macao's integration into the overall national development and maintain long-term prosperity and stability. 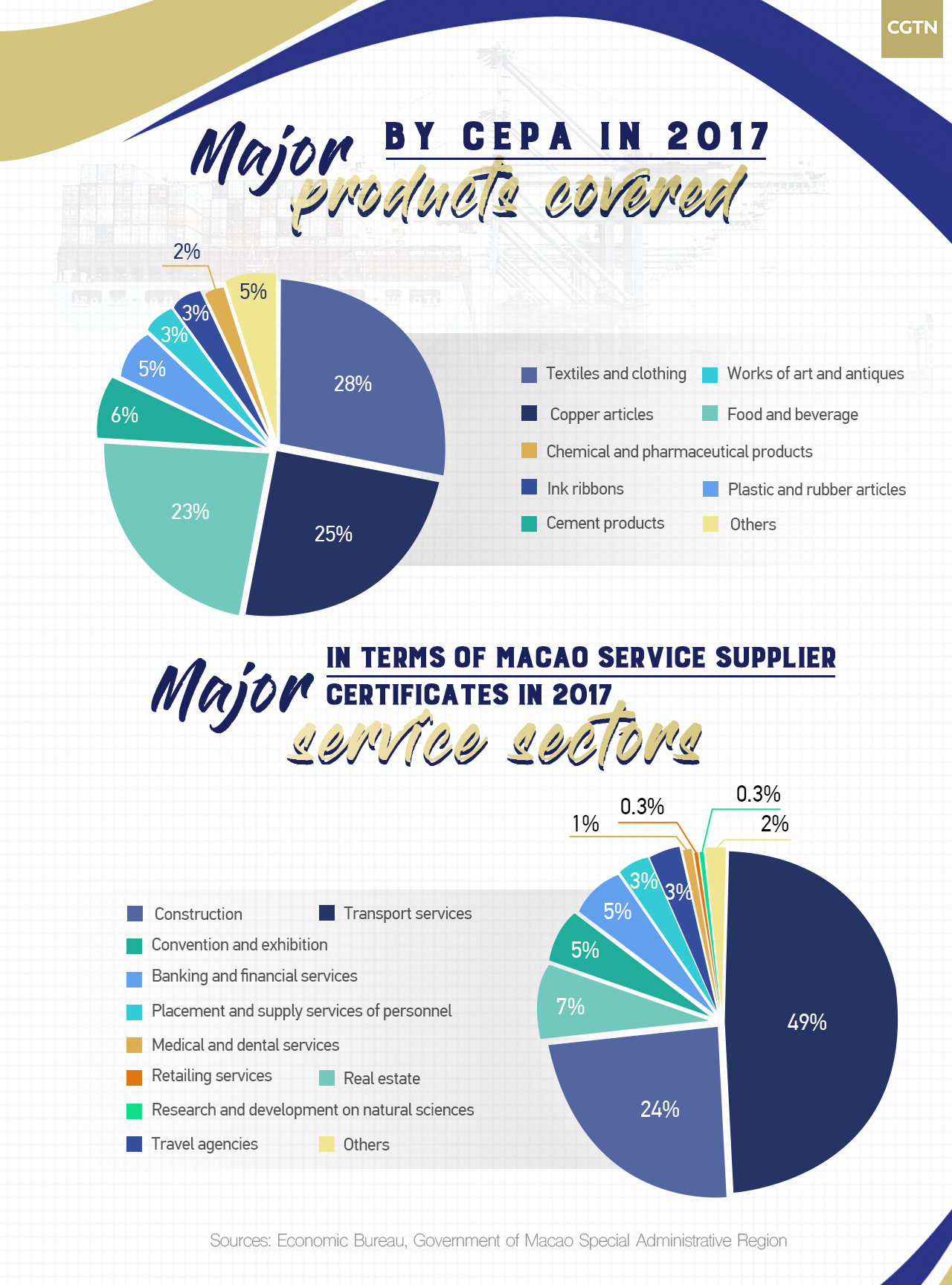