Green energy to be adopted in all Beijing Winter Olympics venues

All venues for Beijing 2022 Winter Olympics will be powered by green energy during the preps and official events, according to an office especially set up for the games under the State Grid Beijing Electric Power Company on June 23, the International Olympic Day. 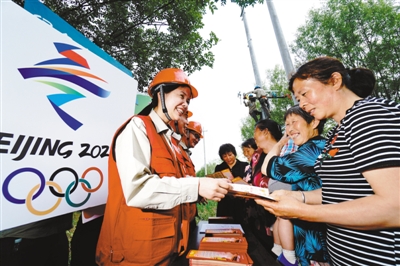 Staffs are explaining policies on the replacement of coal with electricity to villagers at Dongwuliying village of Yanqing district. As one of the three major host sites for the 2022 Beijing Winter Olympics, Yanqing is taking multiple measures to promote clean energy so as to lower the PM2.5 concentration. (Photo: He Yong/People’s Daily)

7 venues and supporting facilities will be the first batch to be connected to green electricity starting from July 1, including the National Stadium and National Aquatics Center, the office said.

The Beijing Winter Olympics will be the first one in history to power all venues by green electricity.

Introducing green energy to all venues will be a strong measure to host the games in a green manner and fulfill China’s promise in its bid, said an official from the planning and construction department of the 2022 Olympic Organizing Committee.