Thanks to the adoption of the green growth model putting President Xi Jinping's vision of "lucid waters and lush mountains are invaluable assets" into practice, the once heavily-polluted village in Anji County saw a tourism boom, which became the main source of income for locals. 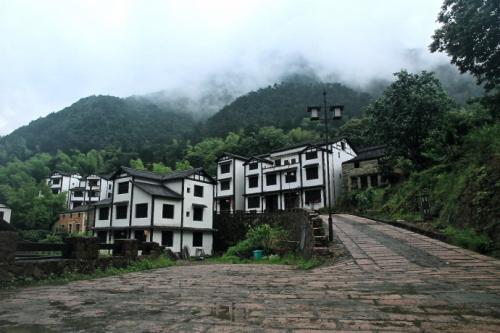 The concept is also translated as "mountains and rivers green are mountains of silver and gold," or "two mountains" concept in short.

Earlier, limestone processing for cement manufacture used to be the source of livelihood for Yucun residents. But, that came with a cost for the locals -- they had to reel under dusty air and heavy pollution. By the early 2000s, the villagers made up their minds to shut down cement factories to save the environment.

During an inspection tour to Yucun in August 2005, Xi, the then Party chief of Zhejiang, spoke highly of the village's wise move to shut down mines, and put forward the "two mountains" concept that has now become a guiding principle in ecological progress nationwide.

Yucun has adhered to that concept and pursued green development for the past 15 years. Pan Chunlin, a former driver in a local quarry, shifted to homestay business after the mine was closed. The income generated by his new venture is much higher than what he used to earn.

"We are determined to stick to the ecology-based vitalization as people enjoy tangible happiness," Pan said.
In March 2020, Xi, also general secretary of the Communist Party of China Central Committee and chairman of the Central Military Commission, revisited the village during his inspection tour in Zhejiang. Hailing the green economy of the village, Xi said that the concept of "lucid waters and lush mountains are invaluable assets" has become the consensus and action of the whole Party and society, and emerged as an important component of the new development philosophy.

"The ecological environment itself is the economy. Protecting the environment is developing productivity," he said.

"We have stepped up the construction of our village after General Secretary Xi's visit in March," said Li Hui, deputy Party chief of the village. "Tourism has generated handsome income for villagers. The per-capita annual income of the village far exceeded 50,000 yuan (7,727 U.S. dollars) in 2020."

Guided by Xi's concept, Anji transformed itself into a model county in environmental protection. The county is also famous for its bamboo industry and its forest coverage rate stands at more than 70 percent.

In recent years, villages in Anji have increasingly tapped into the potential of technology to manage the local environment and achieve green growth. With the improved environment, local organic white tea can be sold at a price of 2,400 yuan per kg.

In Lujia Village, Zhu Renyuan often shows tourists where the local white tea is planted using the phone. Scanning the QR code on the tea packet displays the real-time shot and climate index of the tea mountain.

Zhu has also equipped his tea farm with various technologies to increase yields, such as soil sensors, and temperature and humidity meters, which provide automatic measurement every half hour. Data such as the meteorological index of the farm can be automatically transmitted through the internet.

"Today, the tea farmers rely on the data to plant and pick tea leaves," Zhu said. "The quality and yield of white tea have both improved, and tourists are more willing to buy our pristine product."