Preparation work for the Beijing 2022 Winter Olympics is in full swing with progress being made on building the venues, according to the organizing committee. 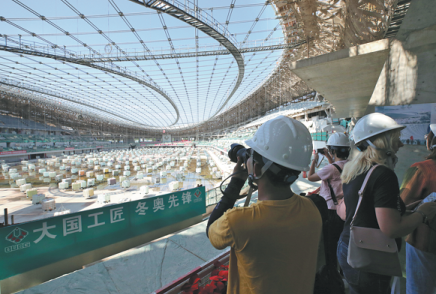 Visitors learn about the latest progress in the construction of the National Speed Skating Oval. (Photo: China Daily)

The grand sports gala will be held in China's capital city as well as in Zhangjiakou in neighboring Hebei province.

The committee briefed media workers, officials and experts at a recent promotional event in Beijing. Eighteen out of 24 competition venues are under construction, including those that served in the Beijing 2008 Olympic Games. The mascot is expected to make its debut soon, and work to recruit volunteers is scheduled to kick off by the end of 2019.

The effort the capital put into presenting a "green, open, sharing and clean" Olympics impressed participants in the China Now: Silk Road Rediscovery Tour of Beijing upon the 70th Anniversary of the People's Republic of China. A group interview was organized by the Information Office of the Beijing government and China Radio International Online.

One highlight of the Olympic preparation work is the green philosophy in the construction of infrastructure. This includes the use of clean power and energy-efficient registration techniques as well as a reduction in land and materials use, said Gui Lin, an official from the planning and construction department of the committee.

Hans d'Orville is chief adviser to the International Center for Creativity and Sustainable Development at UNESCO. He said he was amazed by the National Ski Jumping Center and a large industrial tourism park that were both renovated from disused factories of the Chinese steelmaker Shougang Group.

"The impression is nothing short of overwhelming. It's about transformation to a green economy and society," he said. "Beijing is doing it in a very impressive manner when one of the probably largest steel and iron factories in the country was converted into a sports park. This is unusual to see."

Yasir Habib Khan, a senior journalist from Geo TV in Pakistan, said: "The message to the world is that if something is not operational, it can be used for a better purpose. It will be a model for the world to follow."

He believed the Olympics is "going to be marvelous" and the idea to construct a tourism area after the event is "not only for the Olympics, but also for the people". Participants in the four-day tour were from 13 countries, including Myanmar, Cambodia, Russia, Serbia, South Korea and Turkey.

The National Speed Skating Oval, also known as the Ice Ribbon, where 14 gold medalists will claim their prizes during the Winter Olympics, is another example of green construction.

Wu Xiaonan, chairman of Beijing National Speed Skating Oval Operation, said the venue will use a cutting-edge carbon dioxide refrigeration system. It will barely emit carbon and will be much more environmentally friendly than using Freon, he added.

The heat created by making ice with carbon dioxide can be used to supply hot water and heating. The solar photoelectric film on the roof can also generate power. Its innovative steel structure design can save steel usage by 25 percent, he added.

He posted photos on social platforms and shot livestreaming broadcasts to tell people in Cambodia about what he saw during the trip.