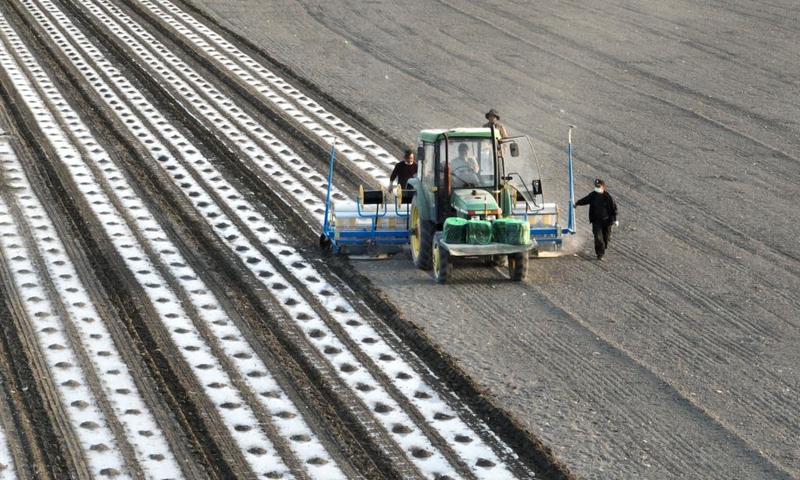 The US' so-called Uyghur Forced Labor Prevention Act (UFLPA), which has been widely described as an "evil bill," may be aimed at cracking down on products and industries in Northwest China's Xinjiang Uygur Autonomous Region as part of a broader campaign to contain China, but its implications are global and severe, because Xinjiang is deeply embedded in the global supply chain in many areas, according to a Global Times investigation into the act's impact on global supply chains.

In interviews with the Global Times, businesses and industry insiders in many countries, including China, Bangladesh, Vietnam and Norway, described the US legislation as wreaking havoc on global supply chains for everything from cotton to mechanical items to solar panels. Essentially, the US bill will create more disruptions to already seriously disrupted global supply and industrial chains, and could even threaten the global green push to tackle climate change, according to the interviews.

While the bill is drafted in a way that seemingly only targets certain Xinjiang products made with so-called "forced labor," businesses around the world will be essentially forced to prove themselves "not guilty" before being able to export their products. This would cost companies billions of dollars, even if they could prove it, which is nearly impossible, according to businesses and industry insiders.

Such dire consequences have been largely overlooked or intentionally ignored by the US government and many Western media outlets as they relentlessly push forward the anti-China narrative and crackdown campaign, according to analysts. Moreover, the bill is also hurting certain US businesses and industries, as China's imports of US products such as agricultural machinery and other equipment have been falling sharply, according to data compiled by the Global Times and industry insiders in Xinjiang. 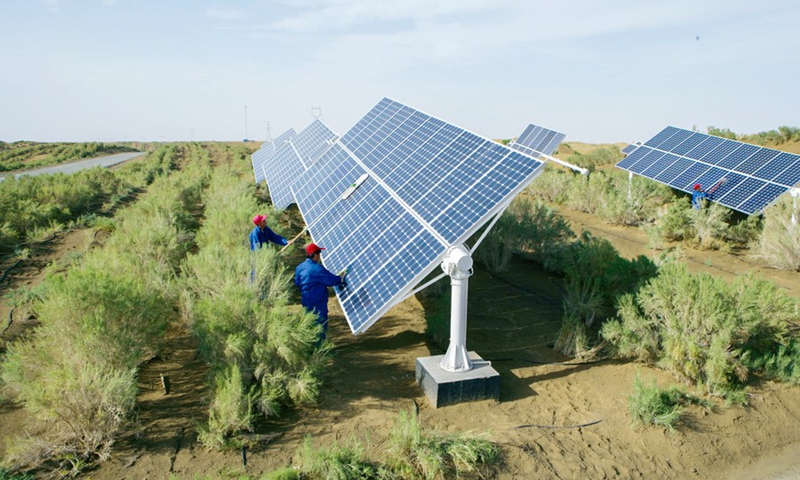 Xinjiang products are sold in more than 170 countries and regions and there are no cost-effective alternatives to some of the products such as cotton and raw materials for solar equipment, businesses and industry insiders said.

Currently, countries and global companies are grappling with a multibillion-dollar dilemma over the tremendous efforts required to prove that their products are not made with so-called "forced labor" and reorganizing industrial and supply chains featuring many intermediate links and large transaction amounts.

"We are anxious about our supply chain as it is heavily inclined toward China and many of our members are large garment and textile manufacturers. The [US ban] has put them under huge pressure," AI Manun Mridha, joint secretary-general of the Bangladesh-China Chamber of Commerce and Industry, told the Global Times.

As the second-largest garment producer in the world, Bangladesh imports 60-70 percent of its yarn and fabric from China, Mridha said, noting that it is very hard to differentiate which yarn or fabric was or was not manufactured using Xinjiang cotton.

China is the world's largest exporter of both textiles and clothing, representing 43.5 percent and 31.6 percent of the global total in 2020. Apart from exporting finished goods, the country also sells intermediate products to third countries, which then export finished products to developed countries, including the US and the EU. For example, Vietnam sources over 50 percent of its cotton yarn from China and more than 60 percent of its cotton cloth, Xu Yaguang, an analyst with Huatai Futures, noted in a research report published on the company's WeChat account.

Do Pham Ngoc Tu, vice chairman of the Vietnam Cotton & Spinning Association, told the Global Times in an interview via email that the UFLPA mostly affects the garment manufacturers in Vietnam, but Chinese investors in Vietnam's spinning industry also use Xinjiang cotton.

She said the US Customs and Border Protection is urging importers to be proactive and to closely review their supply chains to ensure goods or materials are not sourced from Xinjiang. The manufacturers have to replace the materials or they must fulfill a series of complex documents, such as a list of the entities involved in each step of the production process.

Xinjiang accounts for over 85 percent of China's cotton, meaning that it's hard for global companies to avoid Xinjiang cotton if they produce clothes at factories in Asia.

Among Asian economies, only China has cost advantages in terms of medium- and high-end cotton yarn and some fiber yarns, and the country has the most complete industrial chain and production capacity, according to Xu.

The UFLPA will force Vietnamese firms to wean themselves off raw materials produced in Xinjiang in order to ensure long-term access to the US market, Do Pham Ngoc Tu said, stressing that "finding new sources to replace Chinese fabrics will be challenging."

"The US' unreasonable sanctions on Xinjiang cotton and relevant products will further fuel global inflation, and worldwide consumers will be forced to pay the price," said Zhang Jie, who runs a textile plant in Xinjiang and a clothing export company in Shanghai.

However, even if foreign companies could afford to resort to cotton from the US or India - the other two major cotton producers, they would be severely battered by the US' crackdown on Xinjiang solar panels, especially at a time when major economies are striving to realize carbon neutrality and put climate change on the agenda.

The world needs Xinjiang companies and their components in their green energy push, which is expected to lead to a boom in demand for solar panels.

According to a recent report by the International Energy Agency (IEA), the global manufacturing capacity for solar panels has increasingly moved out of Europe, Japan and the US over the last decade and into China, which has taken the lead in investment and innovation.

China's share in all the key manufacturing stages for solar panels exceeds 80 percent today, said the IEA report, and for key elements, including polysilicon and wafers, this is set to rise to more than 95 percent in the coming years.

Xinjiang is rich in quartz ore, the raw material for industrial silicon, which is a key ingredient in solar panels. It also offers companies lower electricity costs thanks to its abundant energy resources, making the region a major production hub for polysilicon in China. Xinjiang accounts for over half of the country's total polysilicon production capacity, the Xinhua News Agency reported.

The latest data from German research firm Bernreuter Research shows that seven of the world's top 10 largest polysilicon producers are based in China, with the others based in the US, Germany and South Korea.

In a sinister scheme to clamp down on the booming industry in Xinjiang and thereby squeeze China out of the global supply chain, the US put five large Chinese polysilicon producers on its Entity List in June 2021, citing the baseless claim of "forced labor" in the region.

Part of the crackdown on Xinjiang is associated with the West's efforts to build up trade barriers using so-called standards such as "human rights."

But industry insiders said that even if other countries have the capacity to produce polysilicon, higher costs and other problems would appear in the global solar supply chains under the US ban. For example, the old facilities and polysilicon manufacturing equipment at foreign companies such as REC Group, OCI Solar Power and Hemlock would create increasing uncertainties for the global solar industry.

Lv Jintao, a polysilicon expert with the China Nonferrous Metals Industry Association, said upstream polysilicon companies have been making changes by adding production capacity in other areas. This move, together with production of raw materials, will continue to ensure China is the No.1 supplier of solar products to the EU as well as the US.

Scatec ASA, a leading Norwegian company that specializes in renewable energy systems, told the Global Times that it is still assessing how the UFLPA will affect it. By stressing that this is an "ongoing" process, it underscores the difficulty and complexity of gauging how the US law could affect their operations, as well as global industrial and supply chains.

In addition to creating chaos around the world, the US bill also hurts US own exports to China.

According to Xinjiang import and export data obtained by the Global Times from the General Administration of Customs, which analyzed 29 categories of electromechanical product imports from the US that form the bulk of Xinjiang's imports, the imports of cotton pickers dropped by 40.2 percent year-on-year in the first six months of the year, even as Xinjiang's overall imports were growing by 6.7 percent.

An industry insider said Xinjiang used to be an important sub-country market for US agricultural and healthcare companies but the "evil bill" was beginning to eat into the fortunes of US companies.

"We would like to buy US machines to pick our cotton; they have good product quality and good servicing teams. It is a sad thing that normal business is now hijacked by politically charged moves," the insider said.

Wang Jiang, an expert at the Institute of China's Borderland Studies at Zhejiang Normal University, told the Global Times that although the "evil bill" bans the imports of Xinjiang products, its impact is also expanding to affect Xinjiang's imports of Western goods as companies cave in to its chilling effect out of the need for self-protection.

"Besides agricultural machinery such as combine harvesters, equipment used in oil drilling and healthcare products are also seeing falling imports," Wang said, noting the bill has caused business for some Western companies to contract.

Some hospitals in Xinjiang have cut their imports of medical equipment from the US and Europe, though it remains to be seen whether they are individual cases or evidence of a wider decline in Western imports, Wang said.

GAC data obtained by the Global Times showed that the import value of magnetic resonance imaging and color ultrasound doppler equipment declined by 52.5 percent and 65.2 percent, respectively, in the first half of 2022.

It is hypocrisy that the bill is taking away Xinjiang people's access to medical equipment while claiming to be safeguarding human rights, Wang said.