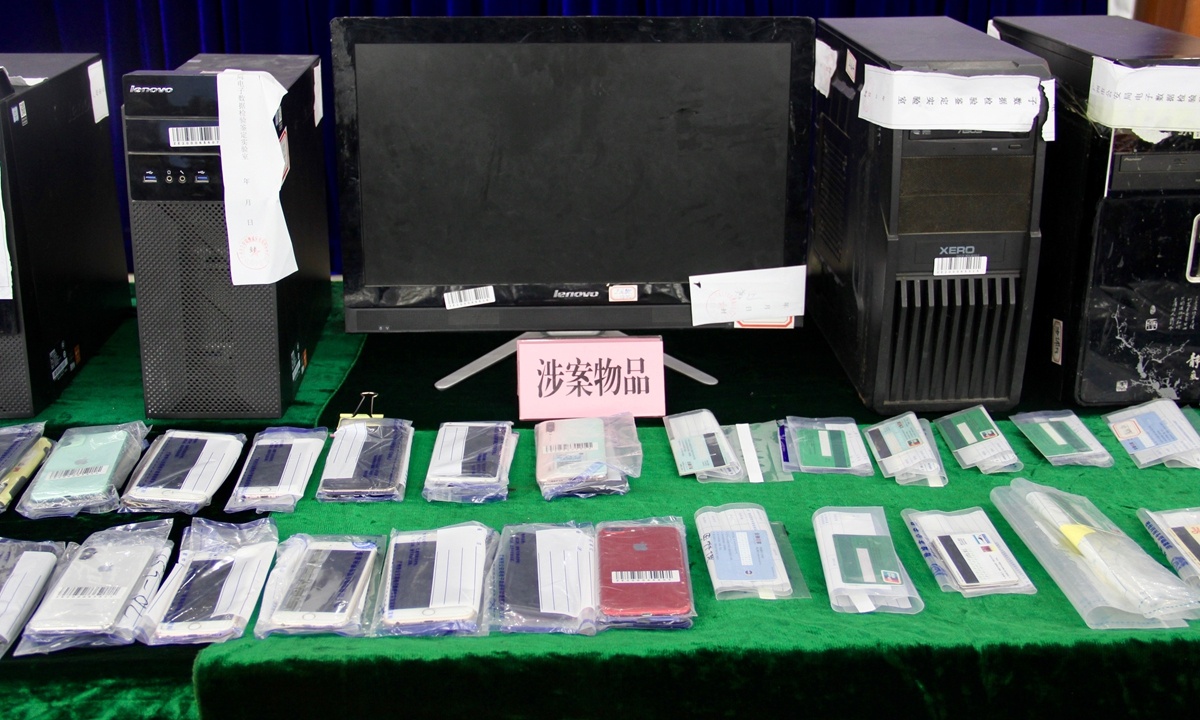 Items seized in a cross-border gambling case such as bank cards, computers and cell phones, are on display at a police bureau in Guangzhou, South China’s Guangdong Province on October 11, 2020. (Photos: GT)

As tourists enjoy their night boat trips along the Pearl River and pedestrians jostle to take photos at the landmark Canton Tower in Guangzhou, South China's Guangdong Province, some others in the region are paying the bitter consequences of a global scourge: cross-border gambling.

From October 10-13, Guangdong police from four cities shared both their achievements and the challenges they faced in cracking down on cross-border gambling amid the COVID-19 pandemic, emphasizing the new trends and direction of their future efforts.

Guangdong has made itself a role model and the frontline in the fight against cross-border gambling. By the end of September, the province had cracked more than 260 cases of cross-border gambling, arrested more than 4,700 suspects and frozen a bunch of illicit funds. Public security authorities also sent SMS messages to 155 million people, enhancing their awareness of law and self-protection.

In a conference that took place in February, the Ministry of Public Security expressed its determination to bolster efforts against gambling. Based on data from the ministry, until now, public security organs across China had handled over 8,800 cross-border gambling cases, arrested over 60,000 criminal suspects, identified over 1 trillion yuan in gambling-related funds and frozen a bunch of illicit funds.

Neighboring the South China Sea, Guangdong Province has been at the forefront of China's opening-up and also encountered emerging problems ahead of other parts of China.

"We have never come across cases like this," a police officer surnamed Lai from the public security bureau of Dongguan said at a press briefing after they had smashed a cross-border gambling syndicate that offered technical support and domestic advertising for an overseas gambling firm.

Dongguan police have arrested more than 60 people, frozen 300 million yuan in gambling-related funds, and cracked down on an underground bank since June.

A police officer said, gamblers' money goes to underground money launderers, and involves the use of controversial virtual currencies such as USDT (Tether).

Huang Yusheng, the deputy head of the Huizhou public security bureau, told the Global Times that if the gambling site's servers are located overseas and the gambling money and profits flow abroad, the case will be identified as cross-border gambling.

"People in charge of overall management in our case were always residing overseas. However, the senior members came back to China for Spring Festival reunion but could not go back to the Philippines due to the pandemic," said Lin Xiaoshan, head of the police bureau of Huiyang district of Huizhou.

He further noted that due to greed, the group did not want to slow down their pace of operations and started recruiting team members domestically, which attracted the police's attention.

The gang bought foreign servers, set up gambling websites, and attracted gamblers, while the money-laundering department was responsible for illegal payment and settlement services by using the digital currency USDT.

For instance, when a gambler registers for membership, he is required to pay for a ticket that costs 500 yuan by scanning a payment QR code from random "runners," 3,000 ordinary people who loan their codes to the gambling gang.

These QR codes make up a money pool known as a "runner platform," making it almost impossible to trace the source of the money, which is used to buy USDT and dispatched to gamblers.

Police said that the "big boss" in the case, surnamed Wu, was apprehended, together with 76 other suspects. Wu's team also provides money laundering services through the platform, police said, adding that most of the team members are aged under 30 and have extensive IT skills. 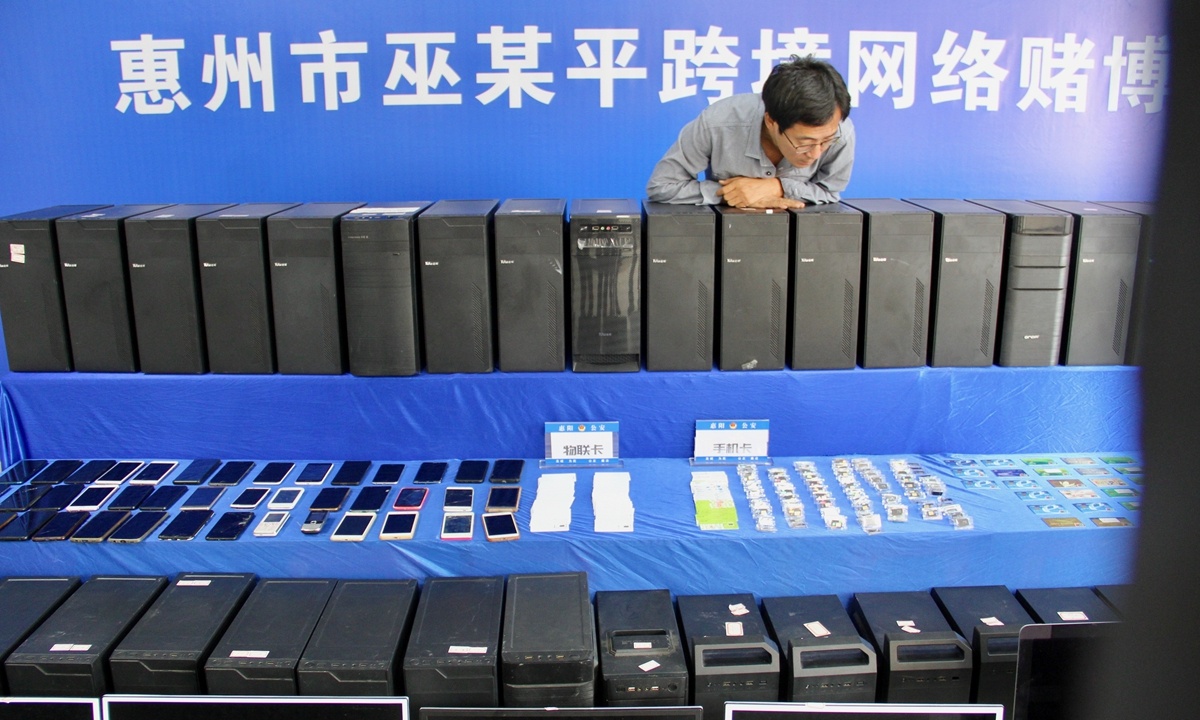 Items seized in a cross-border gambling case such as SIM cards, bank cards, computers and cell phones, are on display at a police bureau in Huizhou, South China’s Guangdong Province on October 10, 2020.

Among the suspects in the cases, there are husbands, mothers, sons and daughters. Many feel regret and shame for taking part in gambling, which has brought irreparable damage to their lives and families.

Lin Huanshen, a police officer from Guangzhou, told the Global Times that the cross-border gambling cases in Guangzhou were first brought to light through conflicts in a family.

Guangzhou police announced on Sunday that they cracked a cross-border case in August that involved over 5 billion yuan, arrested 273 suspects and blocked 1,125 bank accounts.

The criminal gang set up servers overseas and also illegally set up independent payment channels and chat platforms. So far, the police have successfully cracked down on every link in the criminal gang, including organization, management, promotion, operation and gambling capital settlement.

According to Guangzhou police, the investigation into the case started from October 2019, after they received a report from the wife of a deliveryman who was reportedly addicted to an online card game and played day and night, causing him to lose his job.

"He did not know he was gambling and put nearly 200,000 yuan into a gambling platform and owed tens of thousands of yuan," said Lin, noting the young deliveryman had just got married in 2019 but eventually divorced due to discord and debt.

Guangzhou Police said that gambling endangers people's economic security, family life, social stability and is likely to lead to other crimes. Most suspects are reluctant to face their family and media when they are caught.

A young man surnamed Deng, the younger brother of a 30-year-old gambler from an impoverished village in Zhanjiang, was interviewed by Global Times on Tuesday. He told the reporter that the large family had lost a major source of income after his brother was arrested for gambling and inciting others to do the same.

"The whole family went into debt as my brother had borrowed 170,000 yuan from others and lost over 200,000 yuan in gambling… We have been frightened by creditors almost every day since my brother was arrested," Deng said.

Deng's brother, arrested in March this year, got into gambling in September 2019 following "friends" in Guangzhou who told him that he could earn money while playing.

"Sometimes my family wondered why he was always borrowing money. He lied to us and said it was for doing business."

Deng added that his sister-in-law is working in Zhongshan to repay the debt, earning a monthly salary of only 4,000 yuan. Two of the suspect's children are living in the village with their grandparents. Deng said his family is worried that his brother's oldest daughter, who is in first grade, will be impacted by her father's gambling, and that it will affect her relationship with her classmates and mental health at school.

"My brother said he was remorseful and told us to stay away from gambling," said the 28-year-old younger brother, noting the incident could impact his marriage, as no woman wants to be part of a family saddled with debt.

Deng's brother was one of 387 suspects arrested by Zhanjiang police in a cross-border gambling case that involved a record-breaking 38 billion yuan. The police had been investigating the case since July 2018. The gang's overseas management teams are scattered around neighboring countries, and two of the three top executives have so far been arrested.

At a press conference on Monday, the Zhanjiang police made a conservative estimate that there were at least 3,000 gambling participants involved in the case. Police pointed out that their methods of money transmission were complicated, and many suspects had multiple virtual identities, making it difficult to obtain evidence.

Tip of the iceberg

Besides the difficulties involved in obtaining evidence in a virtual scenario where advanced internet technology can be used for nefarious purposes, police noted that international cooperation has not been easy amid the pandemic.

Although Chinese police have worked together with their counterparts from neighboring countries, successfully cracking down on a number of cross-border gambling cases in 2019, now is not the time to lower their guard as syndicates evolve.

Police officers from Dongguan told the Global Times that law enforcement cannot be conducted smoothly overseas due to travel restrictions resulting from the pandemic. Although there are extradition agreements between China and some Southeast Asian countries, negotiations from a diplomatic perspective are also required.

As a result, the real overseas leaders behind domestic suspects remain unknown. Many companies have survived for years overseas due to their ability to avoid detection, the police officer added.

The Chinese government has yet to clarify if it will prohibit USDT. Police said criminal gangs have taken advantage of the vagueness of the law to transmit money abroad.

With the use of digital currency, the ill-gotten funds collected from the mainland can easily be sent overseas, indicating that in the future cross-border gambling, capital and people will be separated, which requires joint efforts from the international community, a police officer from Huizhou told the Global Times.

Police will focus more on where the gambling money goes, and whether there are bigger ringleaders overseas, another police officer from Huizhou told the Global Times.

GT reporter learned from the Ministry of Public Security that it has worked closely with the police in related countries to arrest 590 Chinese gambling suspects overseas amid the pandemic.