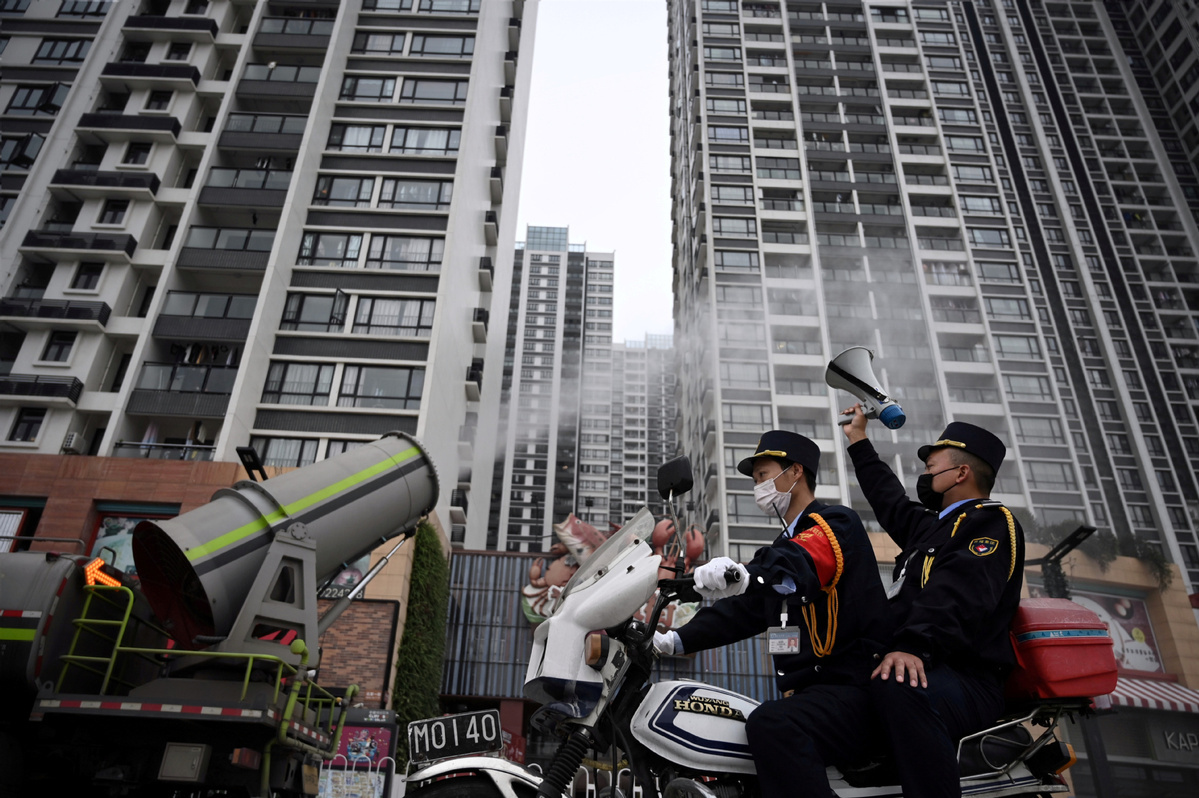 A man holding a loudspeaker sits on a motorcycle as it travels past a sanitizing vehicle disinfecting the public space near residential buildings in Panyu district of Guangzhou, Guangdong province, on February 11, 2020. (Photo: Agencies)

Guangdong province has promised to continue tackling the spread of COVID-19 in the coming weeks as three of the province's districts and a county have been upgraded from low-risk to medium-risk areas.

The work to fight COVID-19 is not yet completed, and relevant departments and locals are urged not to relax their vigilance, according to a statement released by the Guangdong Provincial Health Commission on Monday.

Yuexiu and Baiyun districts in Guangzhou, capital of Guangdong; Bao'an district in the Shenzhen Special Economic Zone; and Huilai county in Jieyang city in eastern part of Guangdong, all of which were previously low-risk areas, were elevated to medium-risk areas on Monday following reports of a number of imported cases in the past several weeks, the statement said.

On Sunday alone, Guangdong, known as the southern gateway of the country, reported seven cases from inbound passengers－two from the United Kingdom, two from Canada, and one each from the United States, Cambodia and Niger.

Gaungdong has reported 172 imported cases as of Sunday.

Meanwhile, the province, which has a population of more than 115 million, reported four asymptomatic COVID-19 patients on Sunday, including one in Guangzhou, two in Shenzhen and another one in Zhongshan.

Leading respiratory expert Zhong Nanshan, an academician of the Chinese Academy of Engineering, had urged Guangdong to introduce more effective measures and seek expansion of cooperation with foreign counterparts to prevent and control imported infections and fight against the pandemic.

Zheng Jianrong, director general of the Guangdong Provincial Bureau of Commerce, said more effective inspection measures will be introduced in the following weeks.

"Currently, the measures that include nucleic acid tests and two weeks of quarantine for all inbound passengers from abroad will continue to play an important role in preventing the deadly disease from entering the province," Zheng told a news conference in Guangzhou over the weekend.

"COVID-19 control and prevention in Beijing will probably become a long-term effort," Xu said at a news conference on Sunday.

"There is little chance of calling off the city's prevention and control work in the short run."

The strategy of guarding against imported cases and a rebound in indigenous cases will remain unchanged, with analysis of the situation and accurate control methods taken, he added.