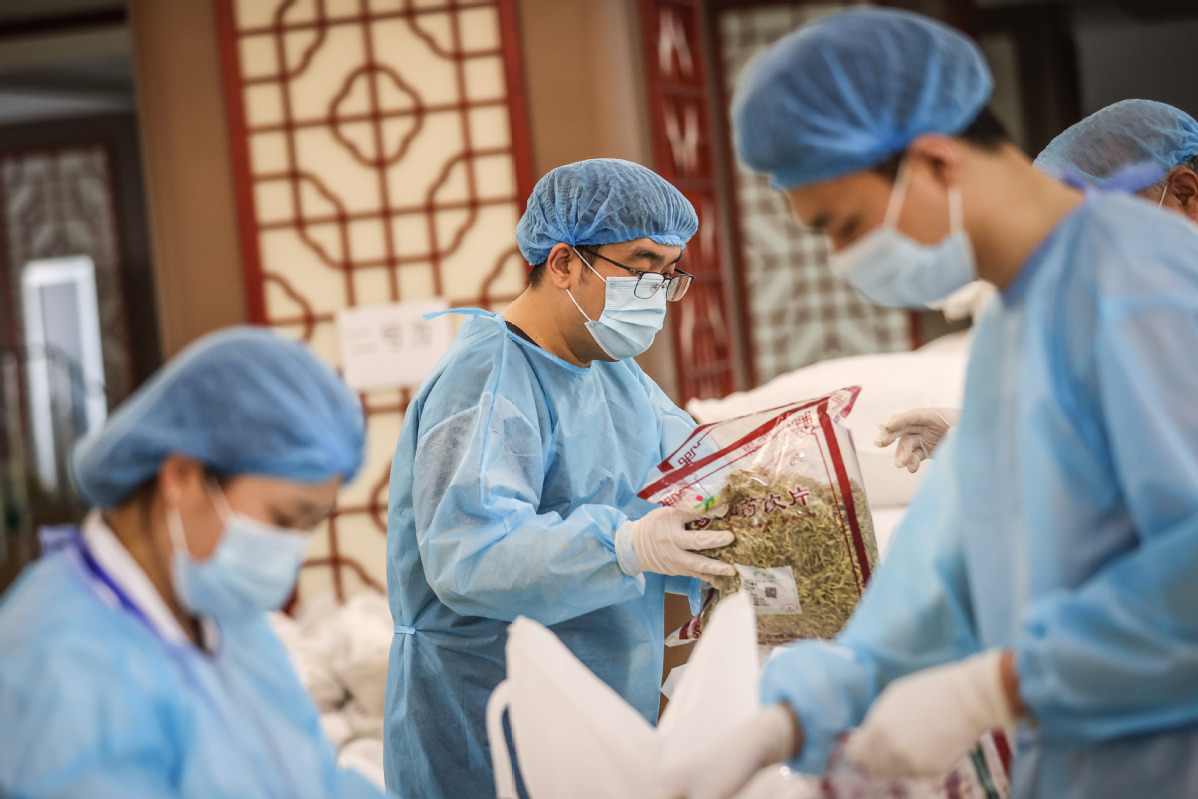 Physicians sort traditional Chinese medicine at a hospital in Yingkou, Liaoning province, on Sunday. TCM has been put forward as a treatment for COVID-19. (Photo: Xinhua)

Guangdong province will be facing heavy pressure in the coming months to prevent and control imported COVID-19 cases after mutated strains were recently detected in Guangzhou and Shenzhen, medical experts said.

Guangzhou, the province's capital, and Shenzhen are major exit and entry ports to the Pearl River Delta and are front-line battlegrounds for preventing and controlling the coronavirus spreading from abroad.

In Guangzhou, a woman surnamed Guo was confirmed on Friday to have contracted a mutated strain of COVID-19 from India, the Liwan district government said in a statement on Monday.

Guo, 75, might have been exposed accidentally, and her case is import-related, the district government said.

Her 76-year-old husband, surnamed Lu, was also confirmed to be infected on Sunday, according to the district's health commission.

It was Lu's third test after Guo tested positive on Friday, the statement said, adding that both are being treated in a hospital.

They had been in Guangzhou for more than two weeks before falling ill and had not visited any medium－or high-risk areas, or foreign countries or regions.

The housing estate where they live was classified a medium-risk zone－the only one in Guangdong－after Guo tested positive.

Their cases encouraged more residents to get vaccinated over the weekend, leading to a supply shortage at the city's many vaccination centers.

To prevent further spread of the virus in Guangdong, which has a population of more than 120 million, the province will allow mass vaccination of residents older than 60.

Until now, it has mainly provided vaccinations for prioritized residents 18 to 60 years old.

Li Ming, vice-mayor of Guangzhou, has urged locals to get vaccinated.

"In addition to immediately launching epidemiological investigations to trace coronavirus sources and disinfect public venues, Guangzhou can now collect samples from more than 750,000 people receiving nucleic acid tests and help more than 460,000 residents a day to get vaccinated," she said.

The city has provided more than 10 million doses of vaccine for residents, and more than 7.45 million had been vaccinated as of late Sunday.

The swab samples of two revealed they were infected by mutant coronavirus strains that appeared in the United Kingdom.

In a routine inspection of international freighter crew members at Shenzhen's port of Yantian, a man surnamed Mu was confirmed infected on Friday, and three more cases subsequently turned up among his close contacts.

They all had worked on the same international freighter, the Oriental Vancouver, on May 17.