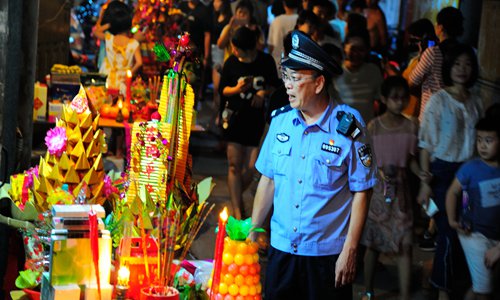 South China's Guangdong Province is enhancing its grass-roots police force and optimizing the allocation of police resources, which analysts noted as a response to a recruitment shortage and massive floating populations especially in poor areas.

The public security department of Guangdong released a guideline that requires counties to dispatch more than 80 percent of newly recruited policemen to stations at the grassroots level for at least two years, the China Police Daily reported on Tuesday.

The guideline also stipulates that police in the grass-roots police stations must account for no less than 40 percent of the county police force in the province.

At stations facing a complicated public security situation, auxiliary police can be twice that of regular police officers where the normal ratio is 1:1, reads the guideline.

China's police force is theoretically deployed according to the registered population, but in practice unbalanced development and a large floating population can create shortages of police especially in poorer areas, Zhi Zhenfeng, a legal expert at the Chinese Academy of Social Sciences, told the Global Times on Tuesday.

"It's necessary to dispatch more policemen to basic levels. They need to integrate with the people for better serving the latter timely," Zhi said.

Analysts stressed that the move as necessary considering the development of the Guangdong-Hong Kong-Macao Greater Bay Area, which would probably bring about more migrants: an inevitable tendency as the industrial level and public services in the province keep developing.

Guangdong, one of the most populous provinces in China, has 113.46 million residents in 2018, according to the National Bureau of Statistics. Of that population, about 40 million were floating laborers, media reported.

Meanwhile, the province has 2,434 police stations with about 54,000 police officers and 95,000 auxiliary police, according to the China Police Daily.

In the past five years, police stations dealt with nearly 120 million alerts, solved 3 million criminal and 5 million public security cases, according to the report.

According to the newly issued guideline, a 24-hour-self-service zone will be established at local police stations, aiming for a better service in minor cases, such as torts and lost property.

The provincial public security department also initiated a three-year-project in May to establish 180 police stations and repair 362 in underdeveloped regions, the China Police Daily said.