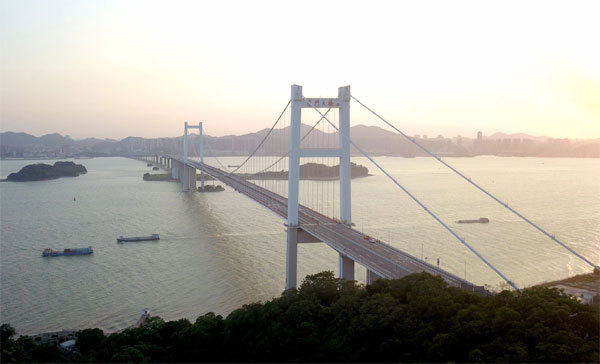 Humen Bridge in Dongguan, Guangdong province, is closed to traffic on May 5, 2020, after vibrations occurred in the bridge deck. (Photo: China Daily)

Guangdong province will conduct thorough surveys on all its bridges and expressways, especially on major bridges crossing seawater, rivers and canyons, and at major traffic junctions long in use, top provincial officials said.

The move, announced on Wednesday afternoon, follows vibrations this week that have shut down traffic on Humen Bridge, a 4.6-kilometer span that links the eastern and western parts of the economically important Pearl River Delta.

Li Xi, Party secretary of Guangdong, pushed for the surveys to eliminate potential risks and for departments involved to fully respect experts' advice and allow Humen Bridge traffic to resume when safety is ensured. On Wednesday, Li visited the command center to evaluate the bridge, which was completed in June 1997.

The bridge was closed after an unusual vibration was first reported at about 2:30 pm on Tuesday. More vibrations followed that night.

The Guangdong Provincial Transportation Department quickly closed the bridge－which handles more than 170,000 vehicles a day during peak periods－and organized a 12-person team of experts to investigate.

On Thursday, experts said the bridge remains safe in the wake of the vibrations.

The main structure of the bridge was not damaged, and the bridge fundamentally returned to its normal state when the vibrations stopped on Thursday, said Chen Airong, a member of the expert team, who is an engineering professor specializing in bridges at Shanghai-based Tongji University.

When Humen Bridge will again be open to traffic was still being discussed by bridge experts, said Zhang Xinmin, deputy chief engineer of the maintenance department of the bridge.

The water channels under Humen Bridge reopened to ships and boats after 4:30 pm on Thursday, according to the Guangzhou maritime department. Following the appearance of the vibrations, no vessels had been allowed to operate or be moored near the bridge as a precautionary measure.

There is little chance that the unusual vibrations will occur again in the near future, Chen told reporters. "The bridge will have no problems when traffic resumes," he said.

Zhang said it appears the vibrations were mainly caused by barricades that had been placed on the bridge's surface by maintenance workers during repairs.

It is normal for the bridge to shake under special wind conditions and the vibrations have little effect on the structural safety and durability of the span, he said.

"The vibrations began to stop after the 1-meter-high barricades were moved away, given that the barricades may have changed the aerodynamic shape of the steel box girder, and that might have caused vibrations," Zhang said. A box girder is a type of structural beam.

But the vibrations have little impact on the bridge's safety, he said.

Humen Bridge links the city clusters of Shenzhen, Dongguan and Huizhou in the eastern part of the Pearl River Delta with Guangzhou's Nansha district and the cities of Zhuhai, Zhongshan, Foshan, Jiangmen and Zhaoqing in the west.

The bridge plays a major role in the infrastructure connectivity of the Guangdong-Hong-Kong-Macao Greater Bay Area, which includes nine Guangdong cities and the Hong Kong and Macao special administrative regions.