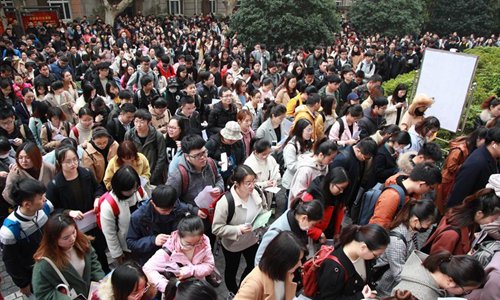 The government of Guangdong announced Tuesday that in 2020 for the first time the South China province will recruit civil servants from Hong Kong and Macao students who have studied at Chinese mainland universities.

The Human Resources and Social Security Department of Guangdong Province said on its website that 3,115 posts are open for the 2020 civil service exam attendants including fresh graduates from Hong Kong who must have studied at mainland universities.

An official at the policy research office of the Communist Party of China Guangdong Provincial Committee and another at Guangdong provincial department of commerce confirmed the policy with the Global Times on Tuesday on condition of anonymity.

The announcement showed the mainland's "great confidence in the special administrative regions despite long-lasting riots in Hong Kong," Lawrence Tang Fei, a member of the Chinese Association of Hong Kong and Macao Studies told the Global Times on Tuesday.

Tang said the policy could attract Hong Kong and Macao graduates and will improve their understanding of the real mainland.

In January, the Chinese Educational Ministry issued a statement allowing residents from Hong Kong, Macao, and Taiwan to become primary and middle school teachers in the mainland.

Tang praised Guangdong for not retreating from a promise to let Hong Kong residents enjoy equal treatment and job opportunities with mainland residents amid ongoing social unrest in Hong Kong.

To allow them to enjoy equal treatment and opportunities on the mainland will enhance their sense of belonging to the motherland, Tang said.

The measure would not weaken the implementation of "one country, two systems" but improve mutual understanding between the mainland and Hong Kong, he said.

Applicants from Hong Kong and Macao should uphold China's Constitution, the leadership of the Communist Party of China and the socialist system, the website said.

They also must safeguard the country's "unification, security, pride, and interest," it said.

An entrance exam will be held on November 26, the Guangdong government announcement said. Registration will open between November 8 and 14.