People who take others' seats on the train, refuse to pay their utility bills or cheat on exams will be named and shamed on a social credit list, according to a draft bylaw released by authorities in Guangzhou, capital of South China's Guangdong Province. 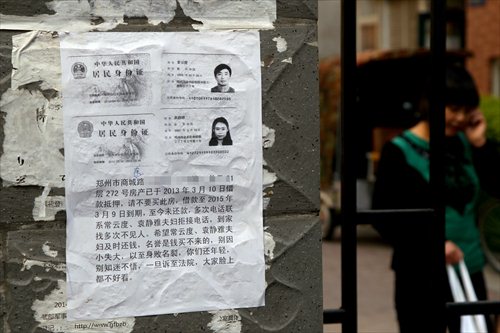 Debt collectors put these copies of loan defaulters' ID cards on the gate of a residential compound. (Photo: VCG)

Those who refuse to comply with certain expected standards of public behavior will be blacklisted, the Xinhua News Agency reported on Sunday. It is unclear how long the person would be blacklisted for, although the system to administer the social credit system has been established and the database already includes more than 1 billion pieces of information, Xinhua said.To protect personal privacy, the draft also stipulates that the credit system is not open to the public. A person can search for his or her own credit information by providing a valid identity certificate while those who want to check others' credit information should obtain written authorization from the investigated party."The starting point of this system is to increase people's sense of integrity, but it should be carefully handled as if the information gets leaked, it will pose threats to public privacy," Zhu Lijia, a professor of public management at the Chinese Academy of Governance in Beijing, told the Global Times on Sunday.Many Chinese cities have developed expansive social credit systems which aim to punish those with bad scores by limiting their travel or publicly shaming them. This includes being banned from high-speed trains and flights. The Beijing Municipal Commission of Transportation released a revision to its code of conduct for subway passengers on Thursday, proposing that "uncivilized" behavior would be added to individual credit information.