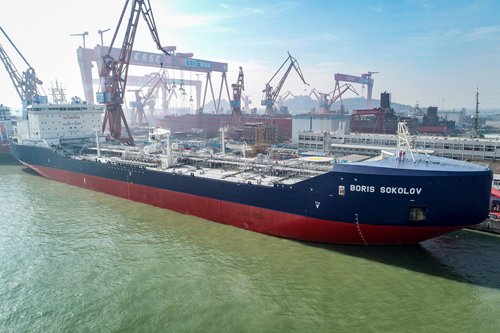 Boris Sokolov, the world's first Arc 7 ice class condensate oil tanker built by China, has its name printed on hull on Tuesday in South China's Guangdong Province. The ship is designed for temperatures as low as minus-50 degrees Celsius and independent navigation in ice less than 1.8 meters thick. (Photo: VCG)

The ship uses no rudders but two nacelles, which are the largest of its type in the world, to steer motion. Rotating 360 degrees, the nacelles allow the ship to break ice with special blades installed when keeping a navigational speed faster than 3.7 kilometers per hour.

First of its kind in the industry, the tanker, Boris Sokolov, is the third ship built by GSI for the Yamal liquefied natural gas project, Guangzhou-based Information Times reported.

GSI provided the project with two working ships in 2016. They are the only ones that can dock at Russia's Sabetta port in winter, where the project is located, said the report.

It is a leap forward for China's shipbuilding industry that is catching up with the world's leaders like South Korea and Japan, Zhang Xia, director of the Shanghai-based Polar Strategy Center at the Polar Research Institute of China, told the Global Times on Wendesday.

Trade and cooperation with the Polar Silk Road countries will be a future growth area for China. Advanced equipment would help the country's development, Zhang said.

The Polar Silk Road is a shipping route that passes through the Arctic Circle and connects North America, East Asia and Western Europe, according to a blue paper jointly released by Beijing-based Social Sciences Academic Press and Qingdao-based Ocean University of China in November.

It will help China save transportation fees of up to $127 billion a year if the route becomes fully operational, the blue paper said. "The new ship would change the situation and allow the transport of oil in winter," said Zhou Xuhui, GSI Vice General Manager.

Zhang told the Global Times that Arctic shipping routes have only limited use due to the region's extreme climate conditions and the icebreaking requirements of ships.