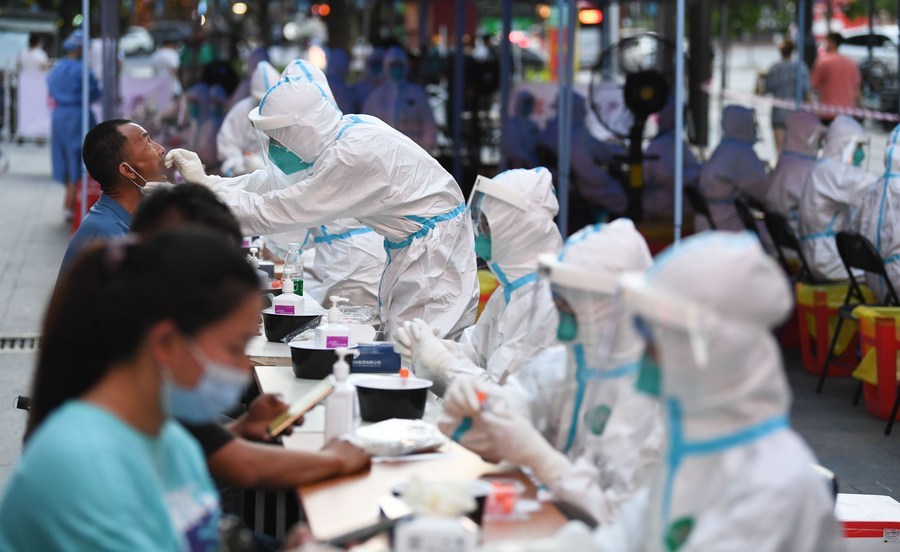 Nansha district in Guangzhou, capital of Guangdong province, has suspended all the metro, bus, ferry and related public transportation services starting late Saturday after three residents in the district were diagnosed to be confirmed COVID-19 cases and one to be asymptomatic carrier on Saturday.

All the new confirmed cases and asymptomatic carrier in Nansha are family members of a local couple who was detected to be coronavirus patient on Friday, said Xie Ming, executive deputy director of Nansha district, on Sunday.

The six family members who live together have all been sent to Guangzhou Eighth People's Hospital for isolated treatment, Xie said.

And relevant departments have closed off the residential building for nucleic acid test for all residents and introduced stricter management, Xie said at a news conference on Sunday.

The couple once visited a restaurant in Guangzhou's Liwan district to have dinner and might have been infected there, he said.

Meanwhile, all the residents in the building have been required to take nucleic acid test once a day starting Saturday, and it will last for a week," he said.

All the areas within six kilometers of the building have also been closed off, allowing people only to enter, for stricter management, while related departments have launched further epidemiological investigation and disinfection measures at public venues in the area, he said.

Xie added that more than 820,000 swab samples have been collected for nucleic acid tests as of the end of Saturday, with more the 210,000 coming out negative.

In addition to the cases detected in Nansha, the other confirmed cases and asymptomatic carriers were found in Liwan district, she said.

To prevent and control the coronavirus from spreading, Guangzhou has required all the residents in the city's 11 districts to take nucleic acid test over the weekend, with Liwan, Haizhu, Yuexiu and and Tianhe districts having started multi-round of nucleic acid tests for all residents.

As of the end of Saturday, the city has collected swab samples of 16.09 million for nucleic acid tests, said Chen.

All the cross-province coach services between Guangzhou and other provinces municipalities and regions have been suspended.