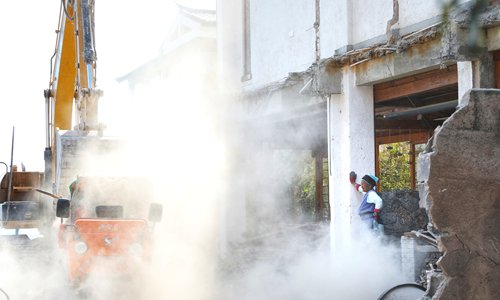 An old lady of the Bai ethnic group watches as bulldozers tear down her property in Dali, Southwest China's Yunnan Province, on January 22. (Photo: Global Times)

When bulldozers tore down the walls of his guesthouse in Dali, Southwest China's Yunnan Province in December, Liu Zaixin (pseudonym), 39, felt that an era had ended. In 2012, the former IT engineer at Huawei's headquarters in Shenzhen quit his job, moved to Yunnan with his wife and child, and invested 5 million yuan ($741,500) in building a guesthouse with a view of Erhai Lake.For Liu, who had grown tired of urban life, it was a dream come true. Erhai, literally "ear-shaped sea," is a crystal-clear lake to the northwest of the ancient city of Dali. For many people, the lake is China's equivalent of Walden Pond, with stunning natural views that provide a romantic escape from the hustle and bustle of urban life. Between 2012 and 2015, many middle-class investors, attracted by the lake's exquisite scenery, quit their jobs in big cities, moved to Erhai and entered the guesthouse business by leasing lakeside land from local farmers and building their own guesthouses. In contrast to hotels, guesthouses in Dali attracted tourists with their unique architectural style and interior design, friendly service and stunning lake views. The guesthouse prices ranged from 300 yuan to more than 2,000 yuan per night, depending on the facilities.But since last October, due to a massive campaign by the Dali government to protect Erhai Lake from pollution, over 1,800 lakeside houses, including 540 guesthouses, have been demolished. Walking along Erhai Lake today, many villages look as if they had been struck by a massive earthquake. Houses have been toppled into heaps of rubble and scrap. The last standing walls and structures are painted with the red Chinese character "chai," literally "to be demolished."

Environmental concernsErhai Lake has a fragile ecosystem. According to a report by Xinhua News Agency, in 1996, 2003 and 2013, three large outbreaks of toxic blue-green algae occurred in Erhai Lake. The number of pollutants in the lake in 2016 has increased by 50 percent compared with 2004."Yunnan's abundance of sunlight and relatively high temperatures mean that Erhai is especially susceptible to toxic blue-green algae blooms," Wang Shengrui, a member with the Erhai Lake protection expert committee and professor at College of Water Sciences, Beijing Normal University, told the Global Times.The drop in water quality alarmed the central and local government officials. In January 2015, during an inspection tour to Yunnan, President Xi Jinping visited a village near Erhai Lake and called on residents and the local government to protect this piece of natural beauty, emphasizing that it is a "long-term task [and] work is far from over," according to Xinhua.In 2016, an environmental inspection team pointed out that Erhai's tourism was not under control and that the water quality at Erhai had deteriorated.The local government is concerned that Erhai Lake is being overwhelmed by the influx of tourists, in part bought in by the guesthouses. "By the end of 2016, there were more than 580 guesthouses and restaurants which attracted 3.2 million tourists annually in the one-square kilometer core area of Shuanglang township," Lou Zenghui, Party chief of Shuanglang township said in an interview with Xinhua.According to the report, the maximum population size the Erhai environment can support is 500,000. But from 2014 to 2016, the number of tourists was 9.18 million, 10.3 million and 15 million, far exceeding what it can take. On May 30, 2018, it launched a plan to demolish 1,806 lakeside houses to make way for 955 acres of wetlands and buffer zone.Sewage system upgradesGuesthouse owners, however, find it difficult to accept the fact that their guesthouses have to be demolished for environmental reasons. Since 2015, many of them have revamped their sewage treatment system multiple times according to local government requirements.Guo Qiang was formerly a public servant who worked for Beijing's water resources authorities. He resigned and left Beijing in 2013 when the smog was at its worst and ran a guesthouse in Dali. "Initially, we had a three-chamber septic system connected to the village's sewage pipeline. We upgraded it to five-chamber and seven-chamber in 2015 and 2016 according to government requirements, and in the beginning of 2017, we invested more than 100,000 yuan in making our own sewage treatment system," Guo told the Global Times.Guo said waste water from the guesthouse, after being treated in the sewage system, was used to water flowers. The remaining waste water would be delivered by truck to the village's waste water station. "Not one drop of water was dumped into Erhai Lake," he said.However, right after many guesthouses installed the sewage treatment system, in April 2017, the Dali government ordered more than 2,400 guesthouses and restaurants near the lake to close. According to a notice by the Dali government, the guesthouses could resume operation after June 2018, when construction of a round-lake sewage pipeline was completed.Despite huge financial losses, many guesthouses followed the order. In April 2018, however, when many guesthouses were waiting for the go-ahead to reopen, the Dali government released a new document stating that all properties within 15 meters of the lake's boundary, called the "blue line," would have to be demolished. The sudden new policy infuriated many guesthouse operators."We followed government requirements to upgrade the sewage system. We obeyed the government when it asked us to close for more than a year. But when the government asked us to demolish in April, I was speechless," Guo said.Dali government did not respond to the Global Times' request for an interview. But Gao Zhihong, Dali's Party secretary, admitted in an interview with CCTV's News Probe in June that government planning and approval had not kept up with the rapid growth of guesthouses. But he stressed that environmental protection should be the priority. "Erhai's water quality changes very quickly. A small relaxation in measures and the water quality will deteriorate," Gao said in the program.Wang Shengrui, the water expert, said Erhai's ecosystem isn't just about water. "If water is a lake's heart, its shoreline and waterfront are like its arms that make up its ecosystem. I think the buildings have to be demolished to make way for wetlands to restore the ecosystem of Erhai Lake," he said.

Paying the priceAccording to statistics from the Dali government, the city's income from tourism was 26.4 billion yuan in 2017, 70 percent of its annual GDP. For a city where tourism is the dominant industry, the environmental crackdown also led to big losses in its economy.Wu Haijun, a former IT engineer in Beijing, opened a guesthouse in Shuanglang township in 2014, one of a few lakeside guesthouses that escaped demolition, as it fell outside the "blue line." Despite this, nearly two years of forced closure of guesthouses and heavy construction in Shuanglang has scared away tourists and devastated the tourism business.He closely follows hotel occupancy statistics on ctrip.com, an online travel agency, every day. "Business has far from recovered. Before the campaign, the occupancy rate of hotels in Shuanglang on ctrip.com was above 65 percent. Now that rate is below 16 percent," he told the Global Times.Locals hold mixed views on the environmental crackdown. One resident who rented out motorcycles to tourists said her business also declined sharply after the guesthouses closed. However, some supported the move."After all, Erhai Lake is Dali's biggest capital. If it's polluted, Dali's tourism industry will also be destroyed. We should look at things in the long term," a taxi driver surnamed Zhang told the Global Times.Wu believes the positive contribution the guesthouses make to the local economy should not be ignored. "There used to be more than 300 guesthouses in Shuanglang township. If each was built with an investment of 5 million yuan, that would mean a total of 15 billion yuan of investment. For such a small town, that's a big contribution," he said.With their main source of income taken away, many of these guesthouse operators are now heavily in debt, and some are suing the Dali government for more compensation and illegitimate demolition process.In response, the Dali government has hired a property evaluation company and will compensate each guesthouse according to its size. But many guesthouse operators believe the sum cannot make up for the losses they have suffered. Nor are they satisfied with how the government has dealt with the entire matter."I'm really disappointed. We invested a huge amount of time and money here. We quit our jobs in Shenzhen's IT industry. Now, even if I want to return to IT, I can't, after being away all these years," Liu told the Global Times. He is now more than 1 million yuan in debt. Along with 20 other hotel owners, Liu has filed lawsuits against the Dali government.Guo has returned to Beijing and now works at an environmental company. He still has to pay more than 500,000 yuan in loans taken out to construct the guesthouse. But for him, it's the emotional pain that hurts much more."Hotel owners either treat their hotels like pigs, which they sell after they get fat, or like children, which they pour their feelings into. In Dali, most owners treat their guesthouses like children. It's not something that can be compensated with money when they're destroyed," he said.