CHINA Guide dogs train to help their users on flights

Guide dogs train to help their users on flights 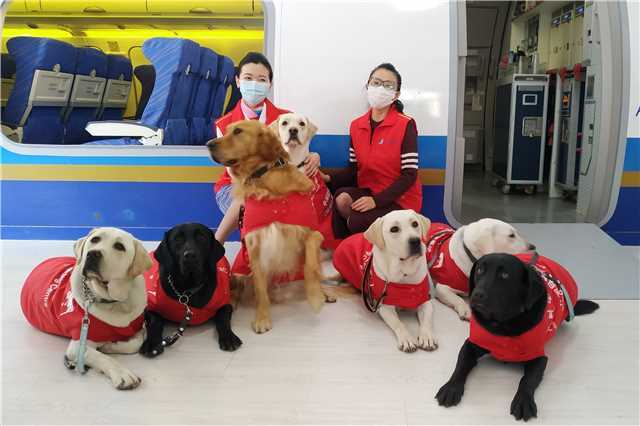 A crew member and a volunteer bring guide dogs to train them to accompany their users on a flight in an aircraft simulation cabin at China Southern Airline Dalian branch in Dalian, Northeast China's Liaoning province on Sept 28, 2020. [Photo provided to chinadaily.com.cn]

Accompanied by crew members, three guide dogs and their users conducted adaptive training at an Airbus A320 simulation cabin at China Southern Airlines Dalian subsidiary in Dalian city. It's a new situation for guide dog service.

"It fills in the blanks of training in flight scenarios," said Wang Xin, a trainer for the Dalian-based China Guide Dog Training Center. According to Wang, a guide dog needs to train with its potential user before it is delivered to the visually impaired person for independent use.

Usually, the center's trainers take them to experience a variety of scenarios, including taking the bus and taxi.

Since November 2019, volunteers from China Southern Airlines Dalian subsidiary have taken them to an aircraft simulator to experience cabin service in advance and introduce the boarding process.

So far, 16 guide dogs and their users have participated in the training.

China Southern Airlines' Dalian subsidiary became the first in China to allow in-cabin transport of guide dogs for domestic airlines in May 2007.

The company also provided an institutional guarantee for users and trainers with relevant qualifications to bring guide dogs on airplanes.