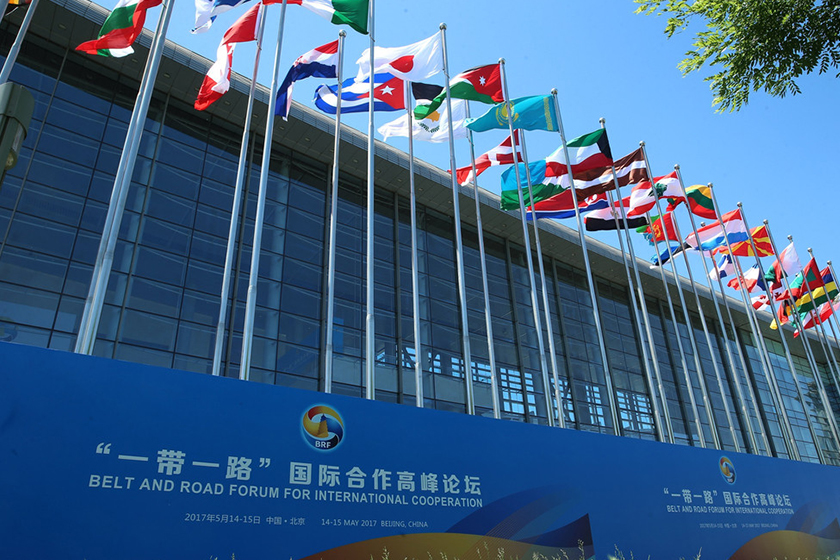 The Ministry of Foreign Affairs released the list of achievements of the Belt and Road Forum for International Cooperation.  (Photo: IC)

BEIJING (Xinhua) -- China's experience over the past year in state and global governance has garnered the world's attention during a time of increasing uncertainty and when nations are urgently seeking solutions to bolster living standards among their populations.

China's national policies and development path, along with proposals it has raised on global governance during various international occasions, reflect key aspects of China's governance: opening-up and win-win cooperation.

China's great leap in its national development over the past seven decades illustrates the effectiveness of its governance, which offers lessons for other nations.

In late October, the fourth plenary session of the 19th Central Committee of the Communist Party of China (CPC) moved forward on modernizing the country's system of socialism with Chinese characteristics and advance its capacity for governance.

"It (China) has created a special model of governance which constitutes one of the most successful and modern models of government in the world," said Antros Kyprianou, secretary general of the AKEL, the second largest party in Cyprus.

Martin Albrow, a British sociologist, said other regions and countries should pay attention to China's governance model as there hides the secrets of China's growth.

By forging ahead along a development path suited to its own national conditions, China has continued to improve people's wellbeing, manifested in its accomplishments in reducing poverty.

Official data showed China has lifted some 850 million people out of poverty during the past 40 years, accounting for over 70 percent of global poverty reduction.

"No other country in the world today can claim such (anti-poverty) achievements," said Dmitry Novikov, deputy chairman of the Central Committee of the Communist Party of Russia.

China has unleashed bold reforms in employment, pension insurance, education and medicine to ensure its population benefits from development, Singaporean Ambassador to China Stanley Loh Ka Leung said, adding this "can unite the whole country to forge ahead."

Togolese President Faure Gnassingbe said China's development is admirable and sets an example for a wide range of developing countries.

As the world's second largest economy, China has been responsible for more than 30 percent of global economic growth for several consecutive years. Meanwhile, it has further promoted opening-up at home to boost global confidence.

In terms of progress within the country, China is set to implement its new foreign investment law starting from Jan. 1 next year, offering a better investment environment for foreign businesses operating in the country.

China also announced in August a plan that adds six new pilot free trade zones (FTZ) to the list of a dozen FTZs established since 2013.

Policies facilitating the opening up of the Chinese market have yielded remarkable results. Official data showed that in the first 11 months of 2019, foreign direct investment (FDI) into the Chinese mainland grew 6 percent year-on-year to more than 120 billion U.S. dollars.

Roberto Azevedo, director-general of the World Trade Organization (WTO), hailed China's opening-up as "a positive decision," saying moves such as lowering tariffs and reforming legislations and policies led to "a more open and integrated China" that "benefited the Chinese economy, (and) the Chinese people as a whole."

A total of 71.13 billion U.S. dollars worth of tentative deals were reached for one-year purchases of goods and services during the second CIIE, up 23 percent year on year, according to official data.

Over 1,300 exhibitors and 3,200 buyers attended the three-day match-making fair during the expo, inking a total of 2,160 tentative deals.

Among the expo's diverse displays, 391 new products, technologies and services were launched for the first time on the Chinese mainland or worldwide.

Jamaican Prime Minister Andrew Holness said that the CIIE is "a clear demonstration of China's commitment to strengthen cooperation in global trade and investment."

China's economic development shows that openness is key to a strong international economy, and China's higher-level opening up offer opportunities to the whole world, Serbian Prime Minister Ana Brnabic said at the CIIE.

An upsurge of unilateralism and protectionism has effectively threatened global governance, with the latest case being the U.S. blocking the nomination of new judges to the WTO Appellate Body, rendering the body unable to review dispute rulings between countries.

China has made it clear to the world that multilateral cooperation is in the fundamental interests of people of all nations.

Xi called for safeguarding multilateralism this year during several international occasions such as the 11th BRICS summit in Brasilia and the 2019 Imperial Springs International Forum in Guangzhou.

At the BRICS summit, Xi said the essence of multilateralism means tackling international issues through extensive consultation rather than allowing one country or a handful of countries to issue a final verdict.

Robert Lawrence Kuhn, chairman of the Kuhn Foundation, said he is "struck by the breadth and scope of China's engagement with the world," adding "there is now no matter of global importance in which China does not participate."

China has been pushing for free trade and more open economies through such frameworks as the Belt and Road Initiative (BRI) and the Regional Comprehensive Economic Partnership, creating new opportunities for many African and Asian countries to raise the living standards of their people.

At Second Belt and Road Forum for International Cooperation in April, a number of achievements were announced regarding the international initiative over the past year, and contracts worth over 64 billion dollars were signed.

China is also an active participant in fighting common challenges facing humankind, such as climate change, terrorism, nuclearization, regional conflicts and others.

"We need a staunch multilateralism" to form an effective response to the environmental problems common to all humanity, said Inger Andersen, executive director of the United Nations Environment Program. "I am pleased to see China taking an active role in promoting this approach."

Maria Fernanda Espinosa Garces, president of the 73rd session of the UN General Assembly, said safeguarding multilateralism "has become an urgent must."

"China has been a very strong ally of the (multilateral) system, keeping the system healthy and alive," she said.