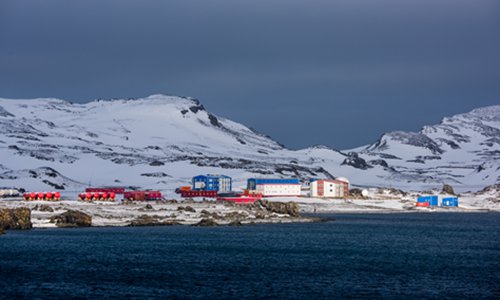 All Chinese mainland travel agencies must submit applications before organizing trips to the South Pole scientific research station, according to a draft guideline issued by the Ministry of Natural Resources.

Required materials include an application to visit the Great Wall research station, a business certificate, a written safety guarantee and an environmental commitment, according to the ministry website.

The regulation seeks to better protect the polar environment and normalize research activities.

China is now the second largest source of tourists to Antarctica after the US, according to a report by the Science and Technology Daily on Friday.

Controlling tourists is an "urgent need," Zhang Xia, director of the Shanghai-based polar strategy center at the polar research institute of China, told the Global Times on Sunday.

The Chinese polar science station, which is located in a region where most international stations are concentrated to test the environment, has become a hot destination for Chinese tourists, Zhang said.

Some 5,300 Chinese tourists traveled to the South Pole in the 2016-17 season and that number increased to 8,200 in the 2018-19 season, according to statistics released by the International Association of Antarctica Tour Operators, which was founded in 1991.

"Asking for applications can control tourist numbers and relieve the environmental stress on the South Pole, while giving the Great Wall research station enough time to arrange reception," Zhang said.

The earliest available spot for an international cruise to the Antarctica is three years from now, an employee of a travel agency based in Chengdu, Southwest China's Sichuan Province, told the Global Times on Sunday.

A tour to China's Great Wall scientific research station is a default destination on a Chinese Antarctic itinerary unless the weather is too bad, an employee of another Chengdu-based agency told the Global Times.

The guideline states that tourists are allowed within 0.5 square kilometers of the station 8am-5 pm on open days.

Permitted activities are not detailed, but the station will designate a staff member to supervise travel activities.

Those who violate the regulations will never be allowed to visit the South Pole again. Punishments were not specified in the document.

Limited station resources cannot fully support so many visitors, Zhang said, noting that the guideline could draw a line between tourism and  research.

The Great Wall is China's first research station in Antarctica and has been in operation since 1985.

It was a one-floor building when first built, and the "No.1 Building" covered most functions including dining, living and research.

After 34 years of development, the station is now a complex of more than 20 buildings.

The "No.1 Building" has become a museum that showcases the history of China's exploration of Antarctica.