Food delivery workers, whose busy schedules have largely been decided by algorithms and time limits set by food delivery platforms, can now breathe easier thanks to a recent move by the central government to reinforce their protection. 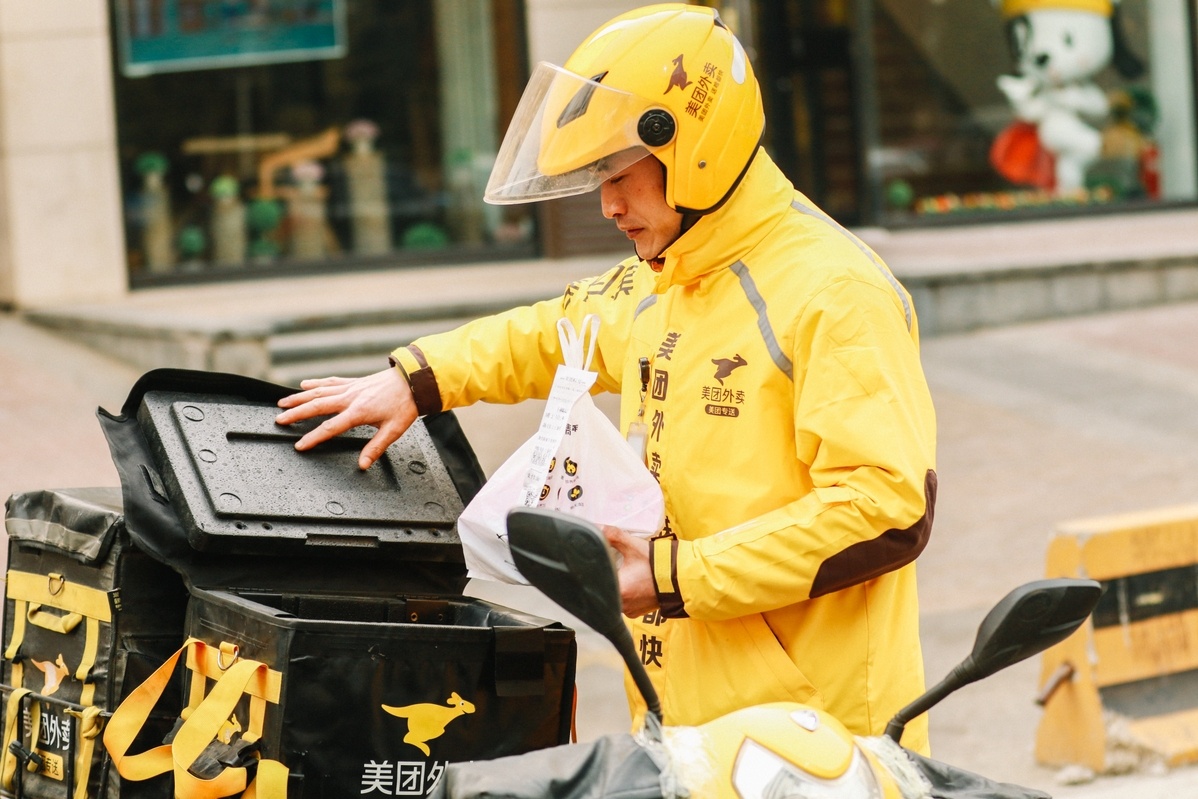 Seven ministries, including the Ministry of Human Resources and Social Security, the State Administration for Market Regulation and the National Development and Reform Commission, released a guideline recently that called for better protection of food delivery workers' rights in areas including salaries, workplace safety, working environment and dispute settlement.

The guideline said the algorithms used to send orders to delivery workers and time limits for food delivery－which used to be touted as selling points by the platforms－cannot be used as assessment criteria. It also required food delivery platforms to relax delivery time limits.

Road safety education must also be provided to delivery workers to encourage them to strictly follow traffic rules, the guideline said. Platforms are also being encouraged to set up temporary stands where delivery workers can take breaks and to develop smart wearable equipment that will help optimize working conditions.

Complaints and disputes should be settled within 24 hours, based on fair treatment and negotiation.

The tough working conditions faced by China's 7 million food delivery workers were covered by Renwu magazine in September, with the story going viral online and triggering criticism of the platforms. The story said they maximized their profits by giving delivery workers strict time limits and passing on most orders through their algorithms.

The algorithms then came in for a barrage of criticism, because they forced delivery workers to drive on the wrong side of the road or run red lights to make deliveries fast enough to avoid negative feedback based on the short time limits set by the platforms.

At a conference two years ago, Wang Shengyao, a senior expert in algorithms for food delivery platform Meituan, explained how the algorithm system worked.

The system sends three to five orders to a delivery worker on his or her way to pick up the food, and then designates a so-called best route. They must deliver 97 percent of the orders on time to avoid having their delivery station's rating and their delivery fee downgraded.

"The system gives us the 'best' route, but never considers the route may have overpasses or traffic lights. It just wants us to go straight," said a 30-something Meituan delivery worker in Beijing surnamed Lin.

"We just can't fight against the system, and I feel like I'm a chess piece controlled by the system. What I have to do is to run, run and run because the faster I run, the more money I will earn. If I stop, the system will deduct my money."

"The delivery time was once shortened to 30 minutes," he said. "It's quite difficult to finish the task if the restaurant delays making food.

"That's why many of my colleagues and I sometimes run red lights to save time. I feel tired, but the earnings are pretty good. I made over 8,000 yuan ($1,240) last month, not the best at my station but quite good."

Wang said he hopes the new guideline will bring positive changes to delivery workers' jobs in the near future.

"What I'm most concerned about is the insurance issue, as the job does have high risks of having traffic accidents," he said. "I hope that the platform can improve the contract and give us better insurance."

Meituan said in a news release that it has organized dozens of meetings with its delivery workers this year to solicit their advice, and it also set up a service department for delivery workers last month.

It said it had added some functions to its app, for example allowing orders to be switched to another delivery worker and sending an order after the restaurant finishes making the food. It has also explored solutions that would protect the rights of delivery workers injured on the job.