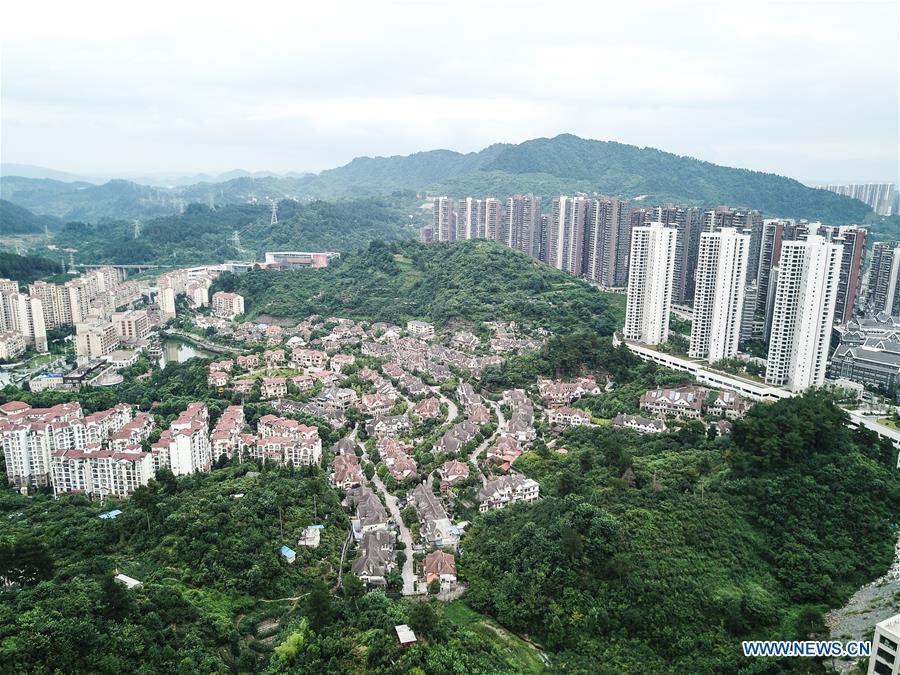 Aerial photo taken on July 3, 2018 shows a view of Guiyang, capital of southwest China's Guizhou Province. Guiyang has been improving its city park system in recent years and aims to provide a good living environment for its residents. (Xinhua/Tao Liang)

At the ongoing Eco Forum Global Annual Conference in Guiyang, capital of Guizhou, government officials, business leaders and scholars from both home and abroad have gathered to discuss issues ranging from climate change to green energy.

Guizhou, which became one of China's first ecological pilot zones in 2016, is located in the upper reaches of the Yangtze River and the Pearl River, featuring abundant natural resources and fragile karst landscapes.

In the eye of Hans Friederich, director general of the International Network of Bamboo and Rattan, Guizhou is improving the urban environment with the concept of green cities.

"One of the biggest problems at the moment is that all the megacities have a lot of concrete, glass and steel and in fact in many places there aren't many spaces that are still natural," he told Xinhua during the forum.

Friederich is impressed by the ecological practice in Chishui, a county-level city in northwest Guizhou. Chishui has been developing the bamboo industry in the past two decades, planting over over 86,667 hectares of bamboo.

The value of the bamboo industry accounts for 42 percent of Chishui's total industrial output, with its paper-making, handicrafts and furniture sectors expanding rapidly.

"We have a lot to learn from the eco-civilization efforts that China has been making," said Grethel Aguilar, regional director for International Union for the Conservation of Nature, for Central America, Mexico and the Caribbean, at the forum.

Caohai lake, a major wetland in southwest China and an important wintering place for black-necked cranes, has recovered its original size. The lake once shrank sharply due to pollution and farming practices.

"The lake saw intensive control over water pollution and soil erosion, with much efforts made in wetland restoration and tree planting. It is indeed a practice worth going national and global," said Liu Xingtu, an academician of the Chinese Academy of Engineering.

With its wetland protection rate up over 14 percentage points in the last five years, Guizhou will step up effort to maintain its wetland area of 210,000 hectares, to raise the protection rate above 50 percent, according to the provincial government.

Facing ecological challenges, it is highly important to "act at local level and to mainstream eco-system services into policy-making and decisions," according to Aguilar.

With continued efforts in ecological restoration and environmental governance, in the first half of 2018, Guizhou increased over 315,333 hectares of forest, with the area of land suffering from rocky desertification and soil erosion reduced by 1,012 and 1,500 square kilometers, respectively.

As the forest coverage rate within the watershed increased to 52 percent, cities at prefecture level in Guizhou saw the number of good-air days reach 96.8 percent, with 100 percent of water from drinking water sources meeting standards.

With new concepts like sponge cities, China is pushing the bar even higher, to make cities even greener than they are already, Friederich said.

The country is resolute in improving its ecology. China is to build 300 national forest cities by 2025, according to a plan issued by the National Forestry and Grassland Administration.