Gunman in SW China's Sichuan remains at large, with hundreds of people searching in mountains: media 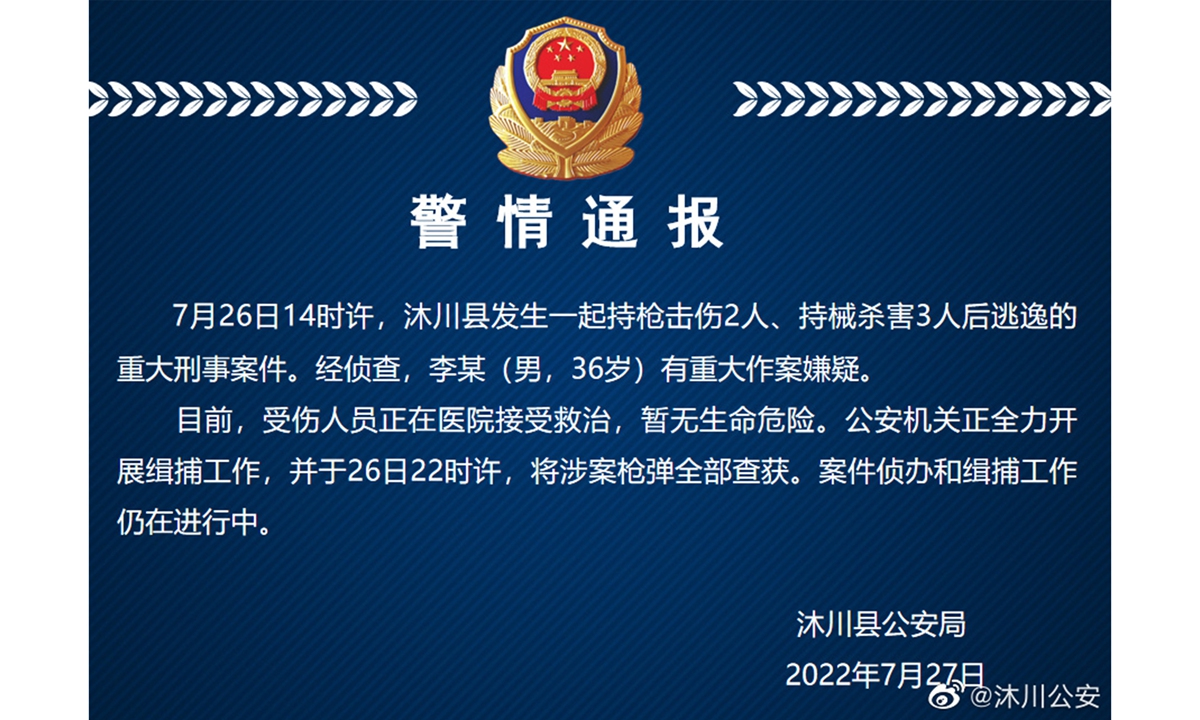 A 36-year-old murder suspect surnamed Li remains at large and hundreds of militiamen are searching in the mountains to capture him after the suspect has killed three people and injured another two with a gun and tools on Tuesday in Muchuan county in Leshan city, Southwest China's Sichuan Province, according to media reports on Thursday.

The gun and bullets involved in the case have been seized by police and the Muchuan police bureau on Wednesday released a notice announcing a reward of 100,000 yuan ($14,821) for those who can provide useful tips or information leading to the arrest of the suspect.

Li, who is about 170 centimeters tall, was born on October 15, 1986, according to the notice released by the local police. The injured are being treated in hospital, and are in good condition, said the police on Wednesday.

It's the third day after the suspect fled into the nearby mountains. An onsite video showed an unmanned aerial vehicle with a loudspeaker saying, "you're surrounded; voluntarily turn yourself in," according to media reports.

The suspect reportedly abandoned the car near an electric power station and fled into the mountains based on the local villagers. Then he seized a motorcycle nearby and ran away on Tuesday, according to Shandong-based Haibao News.

A local resident who participated in the search told Haibao News that they went into the mountains at 8 am and searched until 5 pm. They were divided into different groups with at least five people in one team for safety, according to the report. "There will be supportive personnel," the person said. At least 300 militiamen are searching for the suspect, according to the person.

Qianwei county, where the suspect might be hiding in, is currently on high alert; As of 3 pm Wednesday, one highway entrance has been closed, according to media reports.