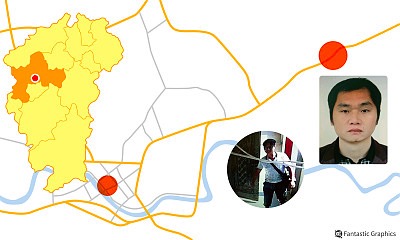 They confirmed a netizen report that Kuang Yulin killed two other people.

They said Kuang has been on the run after allegedly killing two people on Monday in two separate incidents in Shanggao County. A manhunt for the suspect is underway.

Kuang allegedly shot and killed one person in the Gudi Pipe Industry, a building materials market area, not long before killing a second person at the Huang Jin Dui Chengren Driving School.

Witnesses saw Kuang driving away on a motorcycle with a front windshield and a white iron wire basket attached to his back, along with a light-colored umbrella on the sidecar.

Authorities are offering a 100,000-yuan reward for information.