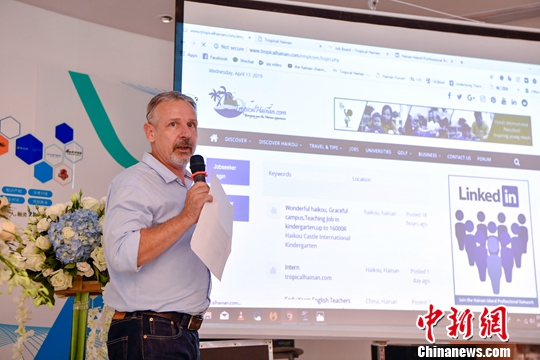 The service is a joint venture between Tropicalhainan.com, a website dedicated to promoting business, culture and tourism in the province, and CamHr, a leading human resources and recruitment company in ASEAN.

The database will release human resource requirements of companies in Hainan as well as facilitate foreign job-seekers to find employment on the island.

Tropicalhainan.com CEO Patrick Quinn said it is easier for foreigners to find jobs in big cities such as Beijing and Shanghai, but the newly launched platform will make up the gap for Hainan both for companies and job-seekers.

Wu Zhi, the deputy director of the Foreign Affairs Office of Haikou City, said more than 2,000 foreigners have obtained work permits in the city, mainly in the fields of education and economy.

As the island province is poised to develop a FTZ, there will be more foreigners working there so the launch of the database will be helpful, Wu said.

In developing the Hainan FTZ, the island will be granted more autonomy to reform and speed up the fostering of a law-based, international, and convenient business environment as well as a fair, open, unified, and efficient market, according to a plan issued by the State Council in October.