A record number of nearly half a million people gathered at Tamar Park in Hong Kong Saturday afternoon to send out the loudest call for an end to violence and radicalism that has clouded the city since mid-June. 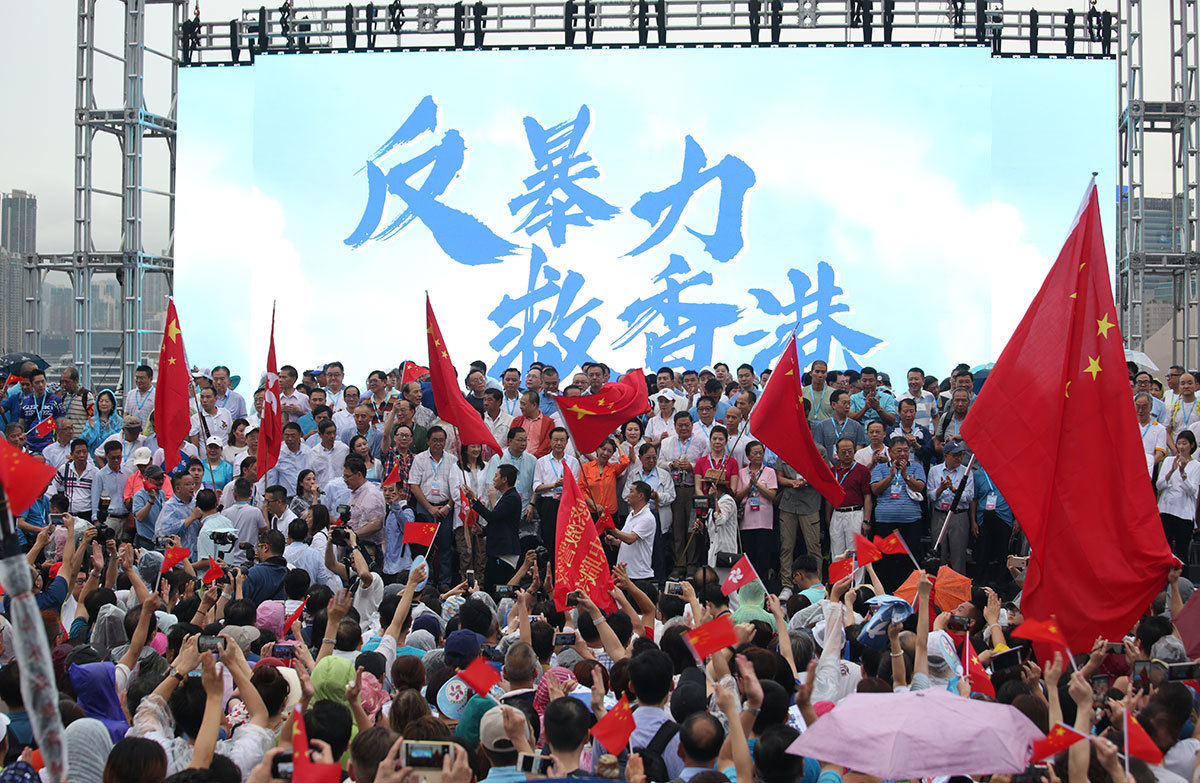 Braving the drizzles, the 476,000 participants demanded an end to all violence and the desecration of national flags and emblems, as well as a halt to attacks on police stations and public facilities.

The participants chanted slogans while waving placards, banners and the national flags and the Hong Kong Special Administrative Region flags.

The city was fed up with the endless illegal marches, they said.

The rally was held after a tough week for the people of Hong Kong, with the city's aviation hub - Hong Kong International Airport - forced to cancel about a thousand flights on Monday and Tuesday, and a mainland tourist and a mainland reporter were assaulted and attacked by black-clad radicals at the airport on Tuesday night.

"Hong Kong was built up by Chinese people, not the British. And the young people here are throwing all of that away. I'm disgusted by it," said Erich Beck, a retired Australian who has lived in Hong Kong for 28 years.

Beck believes overseas elements are at play in the recent violent protests that have rocked the city, with the purpose to "poison Hong Kong" in order to hurt China. He joined hundreds of thousands of local residents in an anti-violence rally on Hong Kong Island Saturday afternoon.

Beck called on the young people to think rationally about their behaviors. "How are you going to make it free or even better if it all been thrown away?"he said.

The rally started at 5 pm when people from all walks of life took the stage to share their thoughts and common wishes. They included people from the education sector, law professionals, entertainment industry, and the business sector.

Tam Yiu-chung – a Hong Kong member of the National People's Congress Standing Committee – called on the participants to salute the Hong Kong police who have been fearlessly maintaining social order. His appeal drew a loud cheer of approval from the crowd.

Tam also warned the radicals who desecrated national flag "not to be enemies to 1.4 billion Chinese people". The national flag and national emblem are the symbols and dignity of the country and cannot be undermined, he added.

Maria Tam Wai-chu, deputy director of the Hong Kong SAR Basic Law Committee of the Standing Committee of the National People's Congress, said those issues, that would damage the overall public interest, are not negotiable. For example, it is not acceptable that the protesters demanded blanket amnesty for those arrested in connection to the violent clashes, said Maria Tam.

The rally ended at around 6 pm peaceful, with the popular song Pearl of the Orient that Hong Kong is billed as.