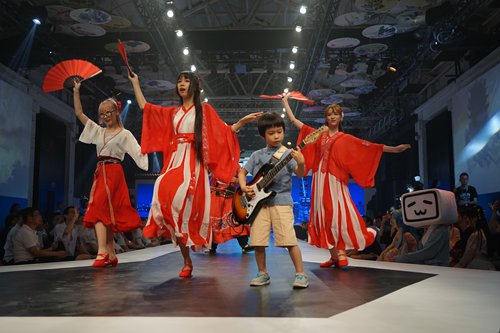 On a softly lit stage, models in exquisite traditional costumes walk down the runway. Accompanied by dynamic background music, these young men and women with elaborate hairstyles and delicate makeup pose in turn, giving the audience a bright, confident smile. On the evening of Saturday, a hanfu-themed catwalk show took place in downtown Jing'an district, at which dozens of artists, professional models as well as internet celebrities together displayed the beauty of hanfu, the traditional clothing of China's Han ethnic group.

Under the theme "a new look of tradition," the event was held to show not only what ancient Chinese costumes looked like and the rich culture behind them, but also how people can make a combination of traditional design elements and present-day clothing style, rejuvenating millennia-old hanfu in modern life.

Many Chinese think that hanfu, usually with big sleeves and long dress trains, is beautiful yet inconvenient. Hanfu's floor-length dresses, for instance, were designed thousands of years ago to hide people's feet, as ancient Chinese believed it was rude and impolite to show one's feet in public.

However nowadays, when miniskirts are so popular among young women, wearing an old-style hanfu skirt can feel a bit sluggish and stuffy.

"I do like hanfu, but how can I ride a bike, go skateboarding or even easily walk upstairs with an overly long skirt?" a netizen wrote on Weibo, which was echoed by other hanfu enthusiasts.

Catering to modern people's tastes and preferences, many hanfu sellers modify their products by shortening the lengths of sleeves and skirts. Some trending clothing elements, such as geometric patterns, polka dots and lace also inspire today's hanfu designers to enrich their works.

At Sunday's show, two popular hanfu brands displayed their modified hanfu, which were creatively worn by models in a mix-and-match style along with T-shirts, jeans, high heels and sunglasses. 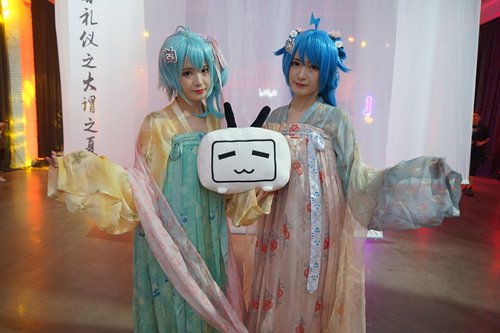 "We have to acknowledge that most hanfu in ancient times, especially the clothes worn by the upper class, were usually designed to be oversized and inconvenient," said invited guest Li Yating, who became interested in hanfu in 2009. "I personally advocate we make some innovations in this old clothing system."

Sitting next to her was Yang Na, author of the book Hanfu's Renaissance, who agreed.

"By maintaining hanfu's basic characteristics such as jiaoling (crossing collar, meaning two parts of the clothes overlapping on the front) and youren (right front, meaning the crossing always on one's right side), I think we can properly add some modern elements to it, including buttons and zippers, making hanfu more acceptable to ordinary people nowadays,"  Yang said.

Apart from catwalk shows, the event also invited well-known designer Li Dengting and renowned Kunqu Opera performer Zhang Jun to share with the audience their ideas on the balance between tradition and innovation.

"There's lots to dig and discover in traditional Chinese culture, yet many of which should be reforged to be better adapted to our daily life," said Li, who presented a few self-designed suits onstage. "By keeping the essence, we can build a new aesthetic system or style for our traditional costume that keeps pace with the times."

"Today the traditional Chinese culture can be presented in various ways, and we should have an open attitude toward it," he said. "The more we understand and admire our traditional culture, the more creatively and confidently we can show and promote it."

The event was organized by bilibili.com, an online streaming platform and co-founder of the first-ever Traditional Chinese Costume Day that fell on April 18 this year.

The Traditional Chinese Costume Day, jointly held by the Central Committee of the Communist Youth League and bilibili.com, is set on each year's Shangsi Festival (the third day of the third lunar month) to encourage young Chinese to wear traditional clothing.

This year, the event was held in Xi'an, Northwest China's Shaanxi Province, on April 18. It displayed a similar hanfu catwalk show there, which attracted some 18.67 million viewers online. 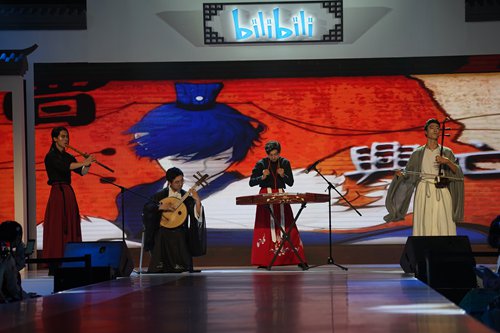