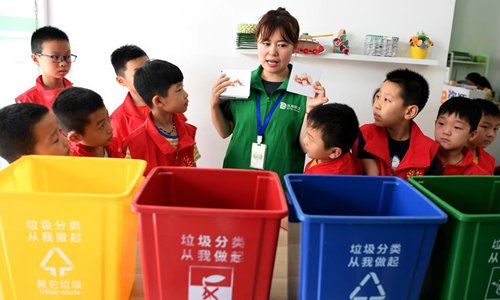 The city of Hangzhou, whose population surpassed 10 million, will ban trash bins along the shopping streets by the end of this year to beautify the environment and better carry out garbage sorting.

All shops in Hangzhou, capital of East China's Zhejiang Province, must move their trash bins from the outside their shops to inside by the end of this year, and shops have to sort garbage before garbage pickups that will be scheduled for fixed time, the China News Service reported.

Garbage collectors will refuse to pick up trash from shops that fail to sort garbage after repeated reminders.

Under the new measure, garbage trucks will stop at fixed locations every afternoon and play music to inform nearby shops they have arrived to collect their waste.

The urban management bureau said that the number of trash bins for passersby will also be reduced to raise public awareness of garbage sorting, and the city will only retain trash bins at important sites such as crossroads and bus stations.

"I support the elimination of trash bins used by shops on the streets," Feng, a 25-year-old woman living in Hangzhou, told the Global Times on Wednesday.

"But decreasing those for passersby is inconvenient to us residents and might lead people to litter on the street," Feng said.

China is promoting garbage sorting and Shanghai was the first city to enforce new trash sorting rules which began on July 1.

The city has installed more than 13,000 waste stations, so far covering 75 percent of the city. It has also replaced more than 40,000 roadside trash cans for different types of waste, which have more obvious and easy-to-understand signs.