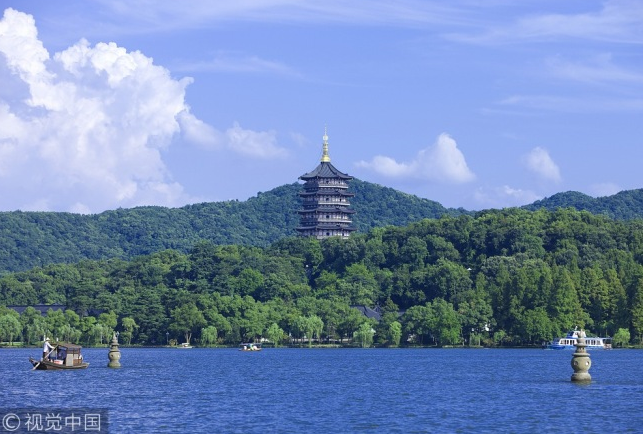 Hangzhou, the provincial capital of Zhejiang province, is famed for its picturesque views and rich cultural heritage. (Photo: vcg)

The city of Hangzhou in east China is well-known for its picturesque views and rich cultural heritage with the celebrated West Lake having long been one of its icons.

At the same time, Hangzhou is seeking to build its modernity by creating a so-called scientific innovation corridor in the west of the city.

Modeled on the Silicon Valley in the United States, the Chinese city is investing hundreds of millions of Yuan to build the corridor into a world leading information technology center.

The scientific innovation corridor derives its name from its physical geography.

New emerging company-based R&D centers have also appeared in the corridor, including so-called Dream Town and Xixi Valley Internet Finance Town, among others.

In 2017, the Future Science City began to host some of its newest members—all connected to artificial intelligence technologies.

The artificial intelligence, or AI, research centers have involved China’s IT giants—Alibaba Group and Baidu.

Meanwhile, the Cethik Research Institute, a leading research entity in electronics in China, is investing 1.3 billion yuan or more than 200 million US dollars to build an erasable and rewriteable optical chips base in the corridor.

Qu Yonghui, an official with the management committee of the Future Science City, explains.

“All the projects are connected to artificial intelligence and are of great significance. For example, there are projects on automatic driving, intelligent medical equipment making and digital image analyzing being carried out in the Future Science City.”

Now trying to attract AI talents and companies coming to the area, local officials aim to develop it into a first-class AI industrial base in China within five years.

As well as the company-driven projects, the scientific innovation corridor is actively making use of the resources at higher learning institutes.

“Our university is situated at the east end of the scientific innovation corridor. We’ll actively get involved with some major industries and enterprises so as to promote the nurturing and application of advanced technologies in Zhejiang province.

“We’re learning from examples like Stanford University and the Massachusetts Institute of Technology and how they conduct coordinated development with the Silicon Valley and Route 128 area.”

In September 2017, Zhejiang University helped to build the Zhijiang Lab, the largest of its kind in Zhejiang province, together with the Zhejiang provincial government and the Alibaba Group. The lab took a total investment of five billion yuan.

Zhu Shiqiang, director of the lab, says it will become a top national lab in terms of artificial intelligence technologies.

“We are really determined and will explore all ways to draw the best experts from home and abroad to our lab. This is the key to our success for the future.”

According to government plans, the Hangzhou corridor aims to create a new generation of IT industries worth more than 100 billion yuan in the future.

Within two years, some 300-thousand talents of various types, 60 percent of them high-tech talents, are expected to work in the corridor. And at least one thousand high-tech companies will operate in the area.

Meanwhile, facilitating measures are being carried out to support the development of the scientific corridor.

The provincial government plans to allocate some 200 billion yuan for the transport infrastructure, like subways and airports in the corridor within five years.