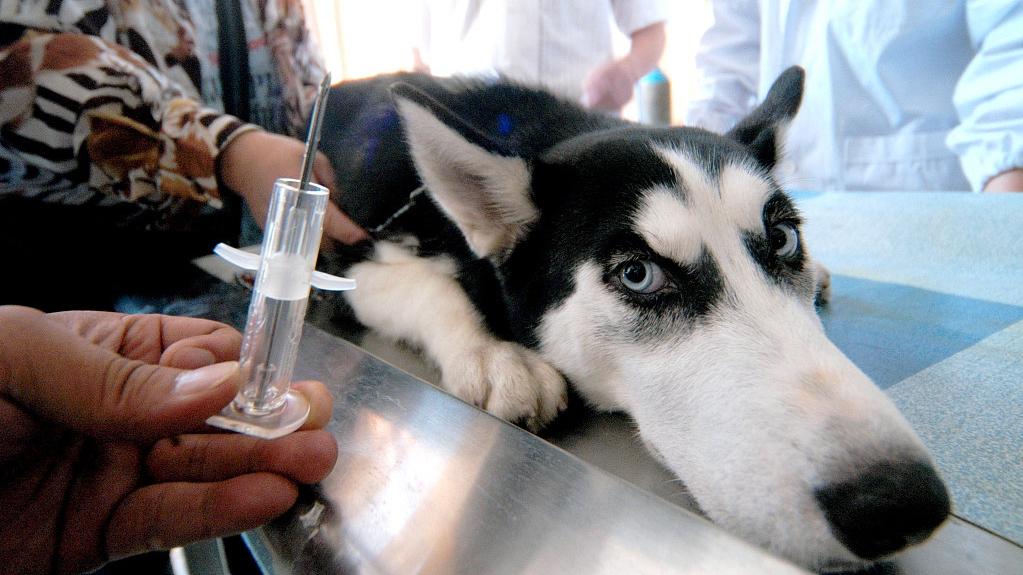 A file photo shows a dog that is about to accept microchip implantation in Nanjing, August 21, 2006. (Photo: VCG)

But Erlv was not ill. Jv brought it to the vet because he wanted the dog to be implanted with a microchip, on which the owner’s contact information is inscribed.

The doctor sterilized part of the skin on the dog’s neck, injected the needle under the skin, pushed the injector, and then the chip was successfully implanted in Erlv.

The whole process is no longer than half a minute, while Erlv kept quiet and still. Zhang Xu, the CEO of the hospital, said the dog can leave after a short stay for observation.

A total of 36 pet clinics in Hangzhou, capital of east China's Zhejiang Province, have started to provide microchip implantation services for pet dogs from July 18 this year.

The microchip is about the size of a grain of rice and is injected underneath the dog's neck skin, which makes it unlikely to be lost. Without side effects, the life for the microchip can last for more than 10 years, which is even longer than average life span for dogs.

In addition, to better protect the dog owner’s personal information, the chip cannot be located. If the dog is lost, the owner can’t trace it through the chip, but if a relevant worker found the dog, he or she can help to find the owner by reading the contact info in the chip.

The move is not only for better protecting dogs, but also to some extent, prevent the occurrence of stray dogs, dog theft, lost dogs, dog attacks, and more.

The move is based on a previous public survey of 3,028 people, which gained approval ratings of more than 80 percent. For now, the chip implantation is free in the city, and is carried out in an encouraged, but not compulsory manner.