When one envisions a sprawling, verdant assortment of greenery and architecture that make up one of China’s most iconic gardens, it is often those in Suzhou that first springs to mind. And this is for a good reason because the gardens located in Suzhou have an important place of interest in China’s multifarious history.

Yet there are other equally important gardens that have played a pivotal role in Chinese glorious past. They may not be as famous as those in Suzhou, but Hangzhou’s gardens are still worth a visit.

Jiangzhuang Garden and Guozhuang Garden are two of the most prominent gardens located in the West Lake Scenic Area, which is a popular destination for visitors. 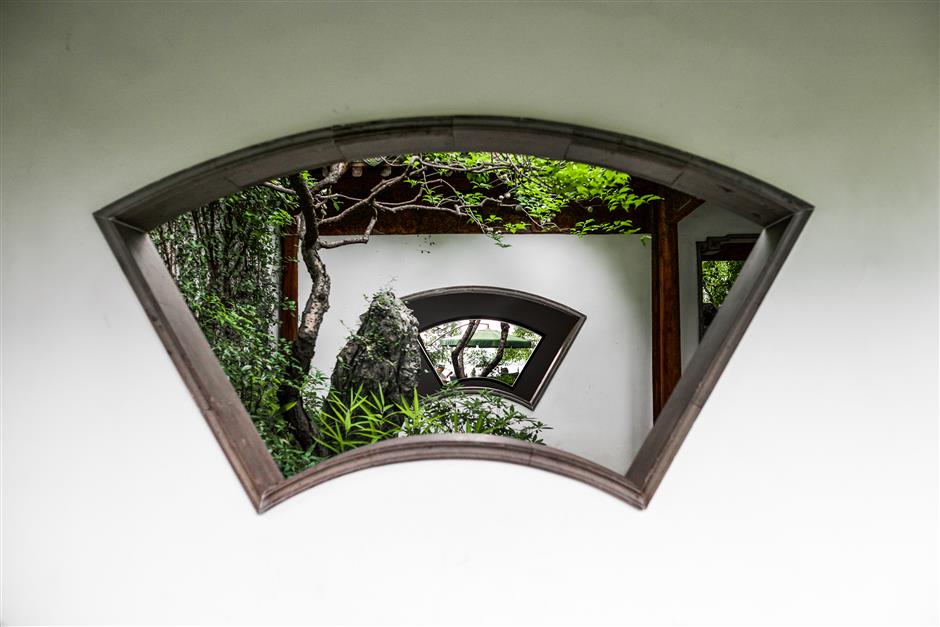 The example of “borrowed space” where each shape fits perfectly within the former. (Photo/Hasani Arnold)

It is situated along the West Lake’s more secluded area and is rather small in size and modest in space. But, as the Chinese saying goes, “The sparrow may be small, but all its vital organs are there.” This is to say that the garden, while rather underwhelming in size, is capable of delivering an experience just as dynamic as any other larger garden.

A stone-carved sculpture of Ma Yifu, a former resident and highly regarded scholar of Jiangzhuang Garden, is found at the garden’s entrance. Directly ahead and aligned with the gaze of Ma is the vast expanse of the West Lake.

Returning back to the former residence of Ma, brilliant colors of the German imported glass can be seen. Bright yellows, reds and greens give the abode an almost fantastical luster. After climbing up to the second floor of the residence, the true beauty of the Jiangzhuang Garden can be absorbed. But from the top room the full extent of the West Lake can be seen without any obstructions. 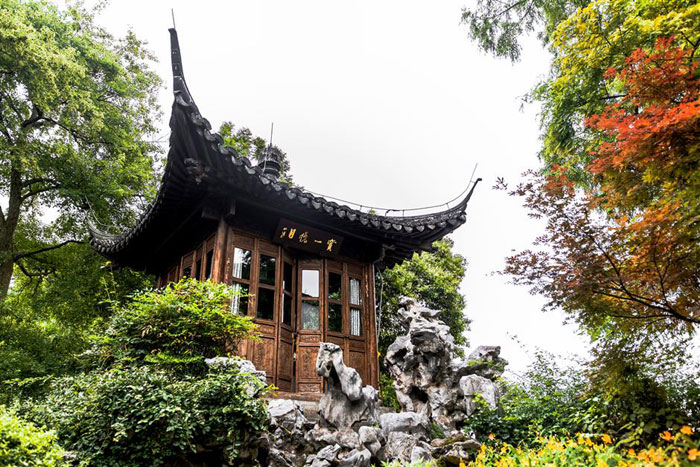 It is significantly larger than Jiangzhuang Garden where hides a great deal of unique architecture and history and can easily be classified as an archetypal Hangzhou flower garden.

Shecang conveys a significant ideology of exclusion, or of withdrawal from governmental responsibilities or domestic affairs. On the other hand, yongxing reveals the concept of usefulness and activity.

A bit farther into the garden leads to some eye-catching ponds and walkways. One of the most breathtaking is the Shangxin Yuemu Pavilion (also known as Zhuyun Pavilion). Arch-roofed pavilions form a rectangular shape and enclose a large section of water. This area was built during the Qing Dynasty (1644-1911) and there is a serene ambience about the place.

Historically speaking, both the gardens of Suzhou and Hangzhou have played important roles in China. In the past, great scholars, authors, poets, government officials and other high-ranking officials have all flocked to the West Lake riverside to embrace its serenity. Yet why were Suzhou gardens more popular than those in Hangzhou? 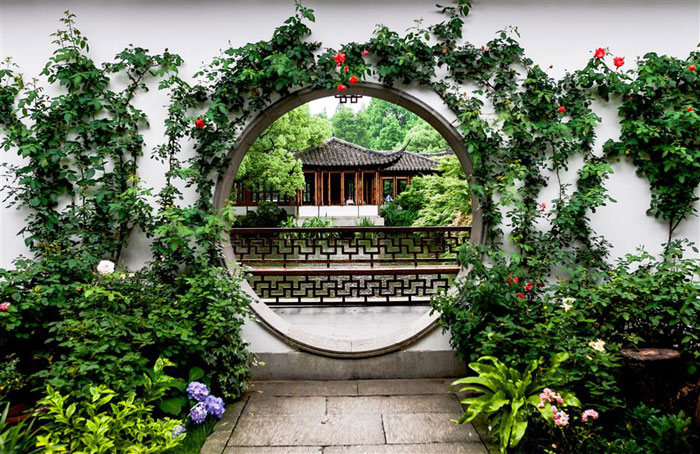 Guozhuang Garden places heavy emphasis on the concept of “borrowed space,” where objects in the foreground are linked to and shape objects in the background, as is seen here. (Photo/Hasani Arnold)

It might be because current day Suzhou gardens have a lot more volume and variety than those in Hangzhou. Yet the gardens in Hangzhou are much more secluded than those in Suzhou, and you feel as if you are entering a new world. You can hear the distant echoes of traffic or industry in Suzhou. So what Suzhou gardens have retained in volume, they have lost in exclusivity, and the opposite is also true for Hangzhou.

The gardens in Suzhou have a more manicured look, making them appear very streamlined and exact, whereas the Hangzhou gardens hold their original appearance. This is evident when examining the waters, mountains and rocks in both gardens.

In Hangzhou, the waters and rock formations are virtually untouched and have remained that way since the gardens were built, yet in Suzhou, many of the gardens have been developed to create a more eye-catching appearance.

The gardens of Hangzhou may not spring to mind when Chinese flower gardens are envisioned but they are places to visit to appreciate their pure and unadulterated nature.

Hangzhou’s gardens have preserved a relaxing quality that is ever-fleeting in present day life. One can enjoy sips of fine tea while gazing at the West Lake, unwind and gather one’s thoughts. While the West Lake may be on the list of places to visit in Hangzhou, do not forget to leave time for the magnificent gardens in this area — it is an unforgettable experience.