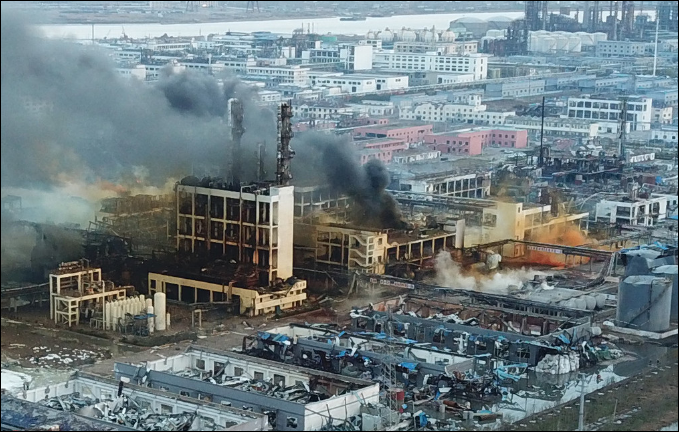 Environmental monitoring has detected an excessive amount of the harmful gas benzene near the site of a deadly explosion in Xiangshui county of Jiangsu province, authorities said on Thursday.

At 10 am on Wednesday, the benzene density stood at 2.04 milligrams per cubic meter at a monitoring point that is 1 kilometer away in the downwind direction from the site, about 17.5 times more than the national standard. The concentration was below the standard, however, 2 and 3.5 kilometers away, according to a media release from the Jiangsu environmental watchdog.

“Analysis done by environmental experts working on the site shows that the excessive density of benzene occurred because buried pollutants were gradually exposed to the air as cleaning work continues on the site,” Liu Youbin, spokesman of the Ministry of Ecology and Environment, told a news conference on Thursday.

The explosion occurred at about 2:48 pm on March 21 after a fire broke out in a plant owned by Jiangsu Tianjiayi Chemical Co. So far, the blast has claimed the lives of 78 people and injured more than 600 people.

Liu, the spokesman, said the ministry dispatched a team consisting of 49 experts from institutes affiliated with the ministry and universities, including Tsinghua University, to the site to help with the environmental aftermath from the explosion.

He also said the team has cut off the access of three rivers to Guanhe River, which empties into the sea, to prevent the pollution from spreading.

The three rivers inside the chemical industry park were found contaminated soon after the blast. On Wednesday, an excessive amount of pollutants was still detected in two water bodies in the chemical park — the Xinfeng River and Xinnong River.

The watchdog also found an excessive amount of these pollutants in Xinnong River, though with much lower densities.