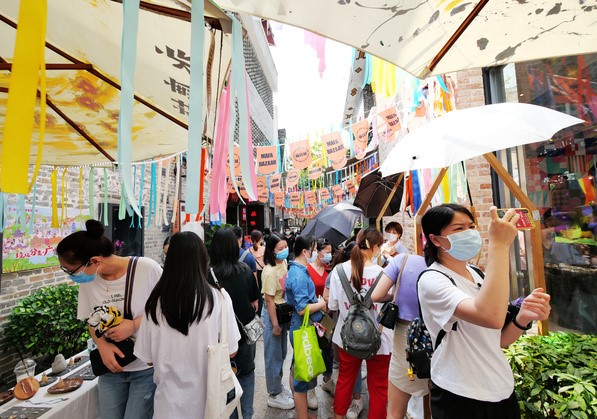 People go shopping at a creative market in Guangzhou, Guangdong province on May 4, 2020, during the five-day Labor Day Holiday. [Photo: China Daily]

That leaves only Beijing and Tianjin municipalities, Hebei and Hubei provinces, and parts of the Tibet autonomous region still with Level 2 alerts.

Level 1 is the highest of the four-level public health alert.

He promised Guangdong will not relax its vigilance as the province still faces challenges in the weeks to come.

"Guangdong is a large economy and the most populous province in the country, and the province that borders Hong Kong and Macao has many annual international events and exchanges," Duan told a news conference in the provincial capital Guangzhou.

He would not rule out the possibility that sporadic cases might arise.

"After lowering the response alert, all hotels, restaurants, supermarkets and bazaars will fully resume production and business while parks, scenic spots, entertainment venues, libraries and museums will also gradually open to the public through advance online reservations, placing limits on the number of visitors, limiting the flow of people and other effective measures to prevent a new outbreak," he said.

He urged people to pay special attention to personal hygiene to prevent infection.

Wang Chuang, deputy director of Guangdong Provincial Department of Education, said more than 15 million primary and high school students will gradually return to campuses starting on Monday when more than 5.5 million students from 10,000 schools in the province head back to school.

Qin Tiehe, a senior disease expert at Guangdong Provincial People's Hospital, said doctors will pay follow-up visits to COVID-19 patients who have been cured and discharged from hospitals to help prevent and control the recurrence of the disease.

As of Thursday, Guangdong reported 1,589 confirmed patients, including 194 imported cases, with only six hospitalized for treatment.

In Shanghai, the municipal government reiterated its guideline regarding wearing masks.

In addition to those who have fever-like symptoms, people must wear masks when they visit hospitals, schools, welfare facilities and take metros and long-distance buses, authorities said.

Meanwhile people are recommended to wear masks in crowded venues and confined spaces.

Wu Huanyu, an official with the Shanghai Center for Disease Prevention and Control, said office buildings, shopping malls and the metro system can switch on central air conditioning with regular disinfection while increasing the input of external fresh air.

Shanghai has reported no local transmissions since early March.

As of Thursday, the metropolis still has 27 COVID-19 patients from overseas in hospital and six suspected cases under observation.