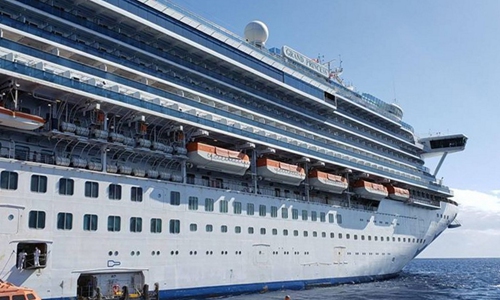 China is paying close attention to the Chinese nationals stranded on Grand Princess cruise ship, which has 21 confirmed cases of COVID-19 on board, and now had been in limbo off the California coast.

Chinese experts believe the US is unlikely to repeat Japan's mistake in dealing with the Diamond Princess, as it would result in more infections in the West Coast of the US.

The Consulate General of China in San Francisco has got in touch with the 11 Chinese nationals working on the ship and been maintaining efforts to trace the presence of any more Chinese nationals.

Currently, their health is stable, and the consulate-general will provide relevant consular protection and assistance based on the situation  and local regulations, Chinese media reported Saturday.

A total of 46 people on the ship were tested, with 21 testing positive for the infection; 24 were negative and one was inconclusive, US Vice President Mike Pence said during a Coronavirus Task Force press briefing, CNN reported Saturday.

Of the 21 people who tested positive, 19 are crew members of the ship and the other two are passengers.

Pence alongside other members of the White House COVID-19 task force said at a news briefing, "All passengers and crew will be tested for the coronavirus. Those who need to be quarantined will be quarantined," CNBC reported.

Only passengers and crew who showed symptoms, including people who were part of the ship's previous voyage were tested, Pence said Friday, citing the company's earlier statement.

The Grand Princess had been in limbo off the California coast with thousands aboard since Wednesday and the California Air National Guard dropped off test kits by helicopter on the ship on Thursday, after officials learned of a California man who'd traveled on that ship last month, contracted coronavirus and died this week.

Passengers on the ship found out about the test results from Pence's press briefing, according to a video from a passenger.

"We apologize but we were not given advance notice of this announcement by the US federal government," according to an announcement broadcast on the ship and recorded on the video. "It would have been our preference to be the first to make this news available to you."

A Chinese expert on disease control and prevention who requested anonymity believes as things stand, the US is taking appropriate measures so far toward the Grand Princess cruise ship.

Further observation toward epidemic prevention measures are needed to follow up after the first batch of test results come out, she noted.

The governor of California, Gavin Newsom, has the power to reject the ship's docking according to US laws. However, the expert noted all people need to get off the ship at the earliest to reduce the risk of infection.

After getting off the ship, they should be segregated in accordance to their health status and other parameters, and quarantined for 14 days, in order to prevent the disease from spreading among local communities, the anonymous expert told the Global Times.

The Wall Street Journal reported on March 2, the Food and Drug Administration of the United States announced to allow hundreds of labs to test the COVID-19.

For the ship, the US is unlikely to repeat the mistake made by Japan in dealing with the Diamond Princess case; otherwise, it would become a "time bomb" to further impact the credibility and image of the US and cause more infections as well, said Lü Xiang, a research fellow on US studies at the Chinese Academy of Social Sciences in Beijing.

Currently, the US stock market showed no confidence in the US government in dealing with the COVID-19 and this will put direct pressure on US President Donald Trump, Lü told the Global Times.

"The key for the US to handle the situation is standing united, but Trump sees the officials and experts in the US medical and health care system as traditional supporters of Democrats, thus they have low mutual-trust, so to what extent they can cooperate is a question," he further noted.