By Tian Xuefei and Zhou Huiying in Harbin | China Daily 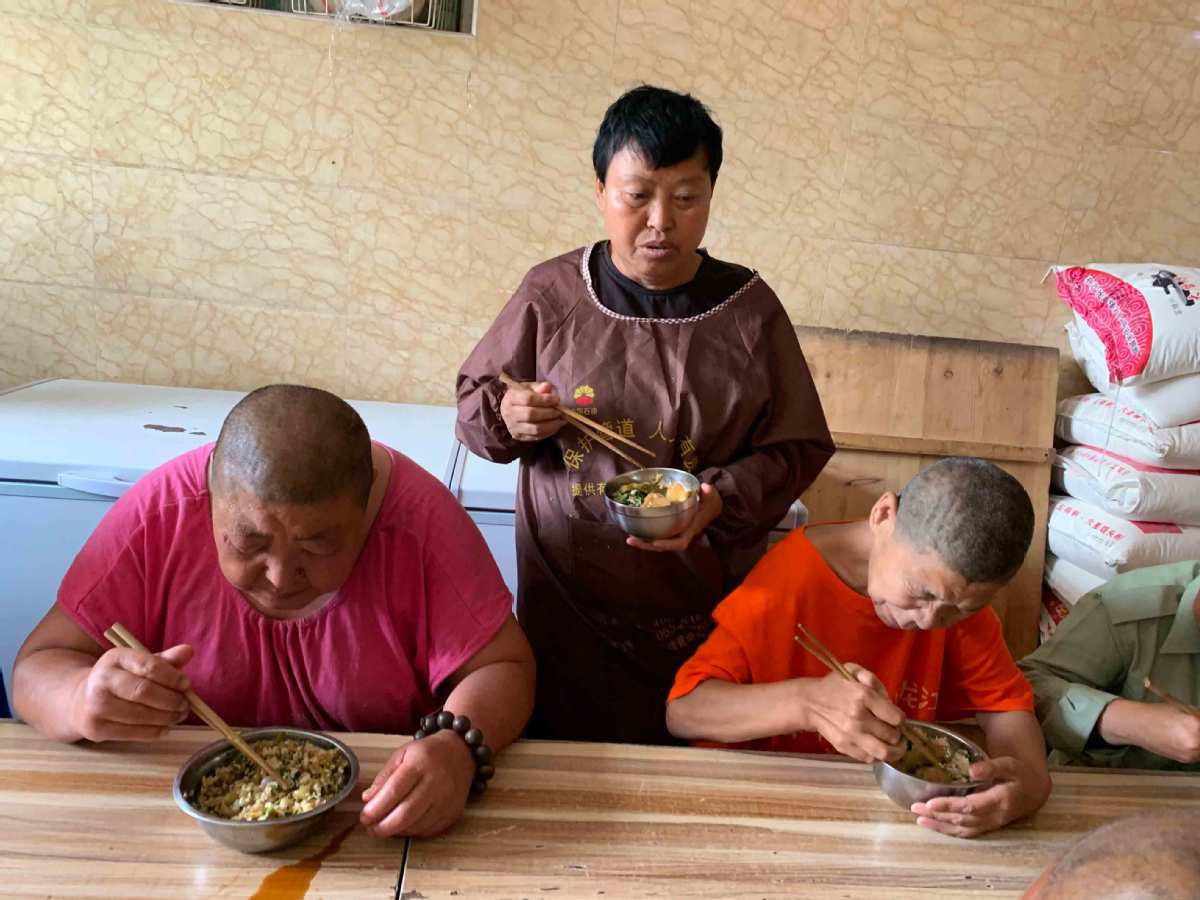 Yu Xihui (middle) has a meal with two of more than 30 seniors living in the Xihui Nursing Home in the suburbs of Anda, Heilongjiang province. (Photos: China Daily)

Every day Yu Xihui wakes up at around 4 am without the help of an alarm, starting her busy day by taking care of more than 30 homeless seniors she has "adopted" over the years.

Located in the suburbs of Anda, Heilongjiang province, her 400-square-meter house has become a home for these seniors.

Yu, 55, calls it the Xihui Nursing Home, after her name.

Like other nursing homes, there are 10 rooms with three beds and a small TV set in each, a dining room and a public bathroom. The difference is that all the residents can live at the Xihui Nursing Home for free.

Over the past 30 years, Yu has adopted more than 100 homeless seniors and looked after them till they passed away.

She remembers the first time she took an old vagrant to her home in 1990.

"It was almost the coldest time of the year when I found him shivering under a straw mat on the roadside," she recalled. "Without enough clothing to keep him warm he appeared to have some frostbite."

When the old man told Yu he had no family to care for him and had begged for many years, she decided without hesitation to take him home. "He might have frozen to death if he stayed outside," Yu recalled.

After eating a bowl of hot noodles at Yu's home, the old man started to recover.

Yu said she could sympathize with the man's plight. 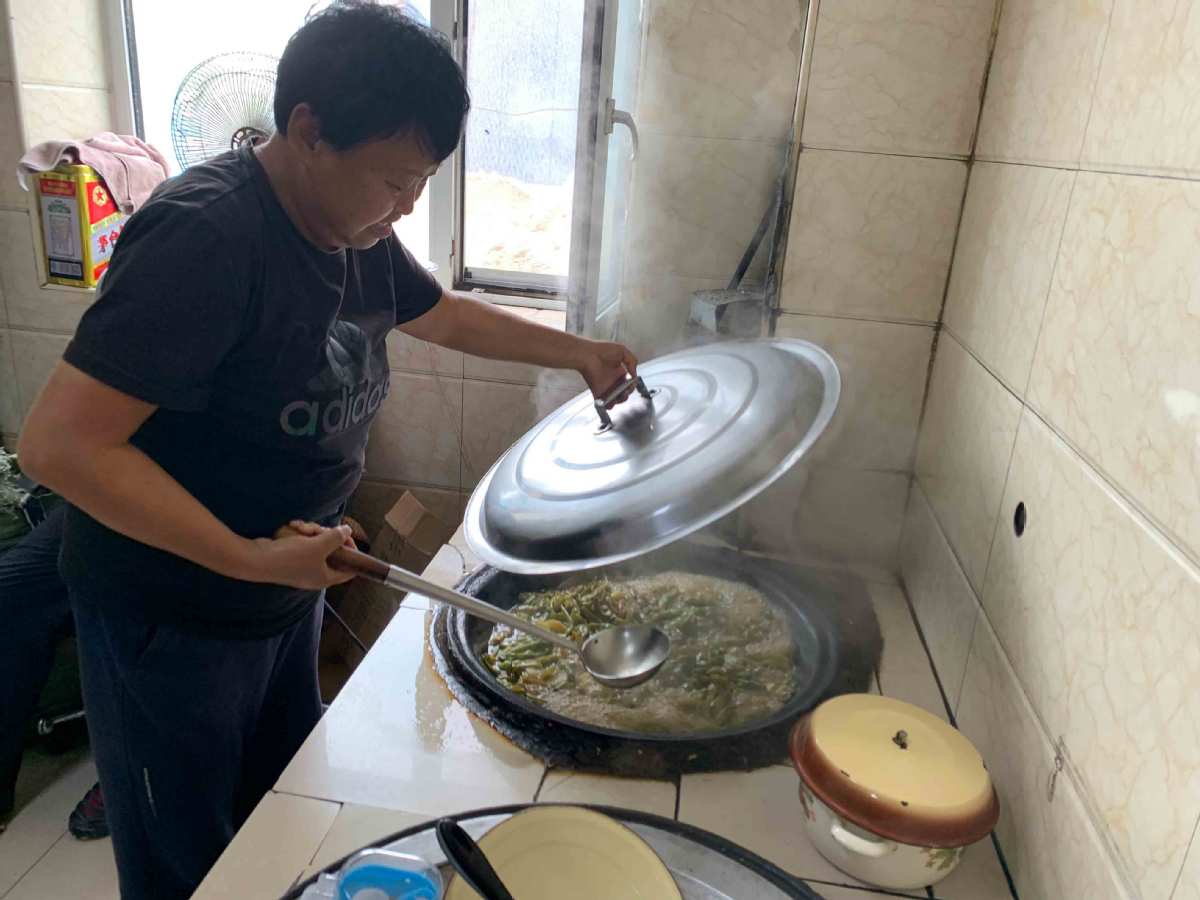 Yu cooks for the residents in the nursing home.

"Both of my parents died when I was 8 years old and I had experienced several years of the wandering life till I married in 1989," she said. "My new family gave me unprecedented happiness and warmth."

"At that time, I just hoped to give the poor senior a warm home," she said. "Fortunately, my husband gave me great support."

In the decade till the man's death, the young couple treated him as their father and also called him "dad".

After that first "adoption", Yu began to pay special attention to homeless seniors when she went outside.

She eventually helped a succession of homeless people and became famous in the small city. Some locals began to send homeless seniors to Yu.

"At one point we were assisting around 40 seniors. Almost all the seniors suffered different mental or physical disabilities, so it was difficult to take care of them and communicate with them," she said. "The daily expenses became another heavy burden for me."

To support the large "family", Yu's husband Xin Shichen quit his job as a sanitation worker in 1995. "He spent most of his time on various odd jobs, such as driving a tricycle, picking up recyclable waste," she said.

Yu was effectively working two full-time jobs. "After finishing my work in the nursing home, I would work in nearby hospitals doing work on the night shift."

However, the couple still struggled to earn enough money to pay for the seniors' food and clothing.

"I seldom bought new clothes and shoes for myself," she said. "To allow them more food I had one meal a day, and it's a habit that's lasted until today."

The situation got better in 2014 when local media began to report her story on the TV and in newspapers.

"Volunteers from the surrounding cities, such as Harbin, Daqing and Suihua came here, helping me do cleaning work, cooking and talking with the seniors."

"Impressed by my story, the original owner agreed with my installment plan after signing a contract," she said. "And with the money I borrowed from relatives and friends I rebuilt the present house."

In order to help repay the debt, Yu's 28-year-old daughter has not married and hands over most of her salary from her job at a website to her mother.

"Since her birth, she has lived with the seniors and treated them as family members," she said. "But I feel quite sorry for bringing her this extra burden."

Over the decades, Yu has also helped dozens of homeless seniors go back to their homes.

"Every time I found a homeless senior I would ask for information and find their family members," Yu said. "I believe they would prefer to live in their own homes."

In the summer of 2011, Yu found an old woman wandering on a street in Anda.

"She seemed a little delirious and couldn't tell us where she came from," Yu said. "I took her home and began to post search notices with her photo in nearby cities including Harbin, Daqing and Suihua."

Three months later, a young couple came to Yu's nursing home and the old woman burst into tears as soon as she saw them.

The old woman regained her memory, telling them that 30,000 yuan she had with her was stolen when she was traveling on the train from Shandong to Harbin where her daughter lives.

The mental crisis triggered by the robbery made her get off at the wrong stop in Anda.

"I was so happy to see their reunion," Yu said.

Due to decades of strenuous work, Yu fell ill in 2015 and was diagnosed with severe heart disease.

She stayed in hospital for a month after heart valve replacement surgery and returned to her nursing home even though doctors repeatedly told her to take a good long rest and avoid working hard.

"I couldn't rest properly without thinking about these seniors," she said. "I must stay with them."

Unable to rest and recover, Yu's physical condition has grown worse and in March she was diagnosed with kidney failure. "I have told my husband and daughter that if one day I pass away they should continue my work," she said. "Here will always be the seniors' home."