CHINA Heart-warming stories about Xi and the elderly

Heart-warming stories about Xi and the elderly

Today marks the Double Ninth Festival, also known as the Chongyang Festival, a traditional day to pay respect to senior citizens in China.

For President Xi Jinping, respecting the elderly is both a traditional virtue of the Chinese nation and a common responsibility of the entire society.

At the moment, let's review some heart-warming stories about President Xi and the elderly. 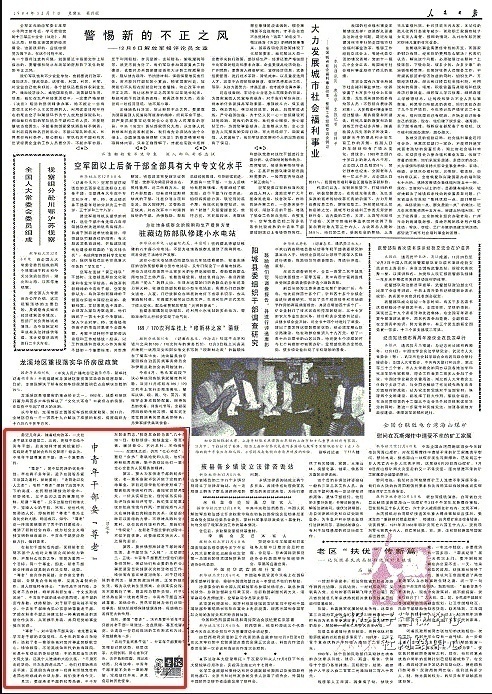 President Xi has urged respect to senior citizens in his first signed article published in People's Daily in 1984, the flagship newspaper of the Communist Party of China.

At that time, Xi, at the age of 31, had been the secretary of the CPC Zhengding County Committee for one year. He allocated the county’s only jeep to veteran cadres, with himself riding bicycles. Many elderly people found hard to say goodbye to him when Xi was about to be dispatched to other places. 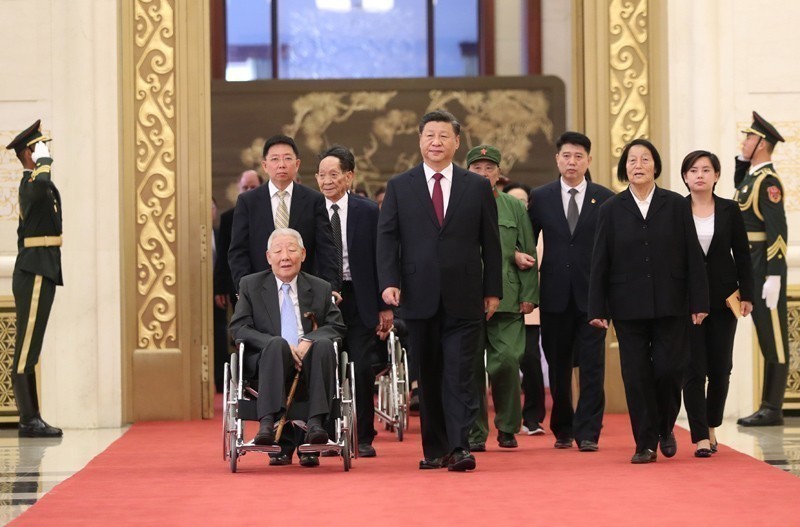 Xi has conferred highest state honors to eight individuals, with an average age of 91, ahead of the 70th founding anniversary of the PRC. Xi presented them medals and shook hands with them to express his respects.

Aerospace engineer Sun Jiadong, 90, is one of the awardees of the Medal of the Republic and was visited by President Xi eight years ago. During a visit to three scientists in 2011, Xi, then the Chinese vice president, came to Sun's home, and expressed appreciation and gratitude to Sun due to his outstanding contributions to China's development in space science and technology. 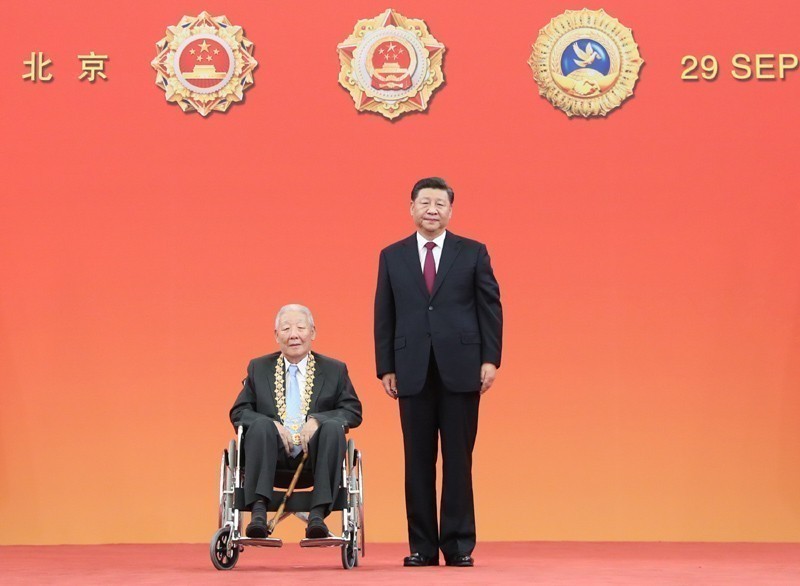 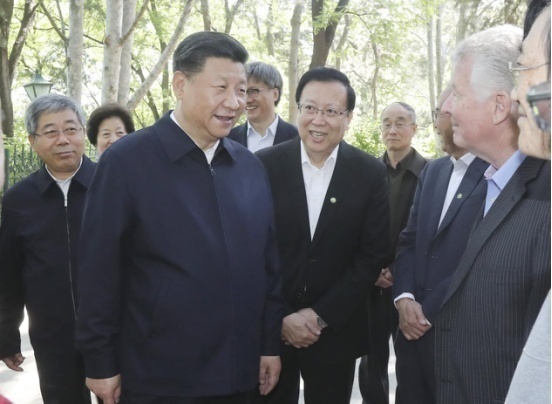 President Xi visited Professor Qian Chengdan and Professor Du Weiming during an inspection tour to Peking University last May. Xi expressed his delight after seeing the senior professors were healthy and in good spirits.

"I would like to salute you for your tireless efforts over the past decades and your dedication to educating young student." Xi said. 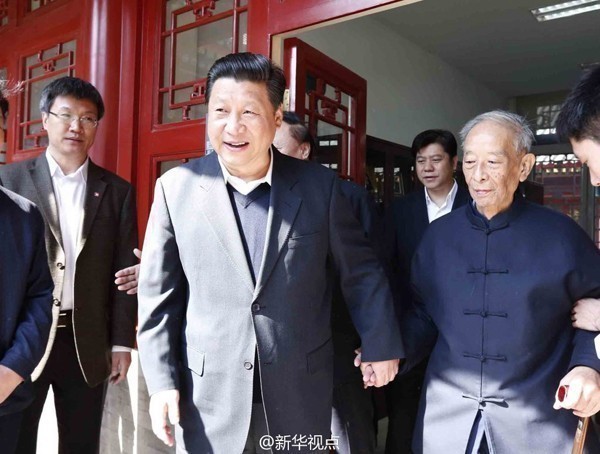 This is reminiscent of Xi's sincere meeting with famous philosopher Tang Yijie in 2014. When Tang went out of his office to welcome President Xi, Xi hurried forward to shake hands with him. 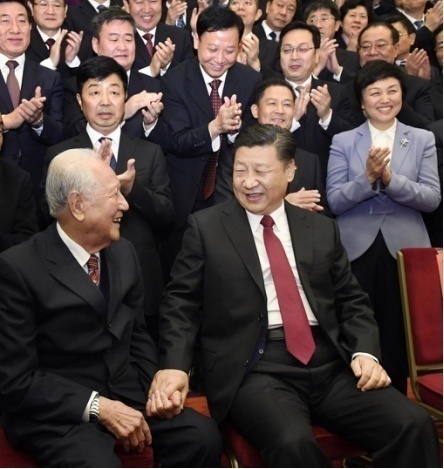 This touching moment happened when Xi was awarding representatives attending the award ceremony on ethical role models and pioneers in Beijing on November 17, 2017.

When preparing to take a group picture, Xi took the hands of 93-year-old Huang Xuhua - known as the father of China’s nuclear submarine - and invited Huang to sit beside him.

This move touched everybody on the scene. The crowd burst into sustained applause before the photo was taken. 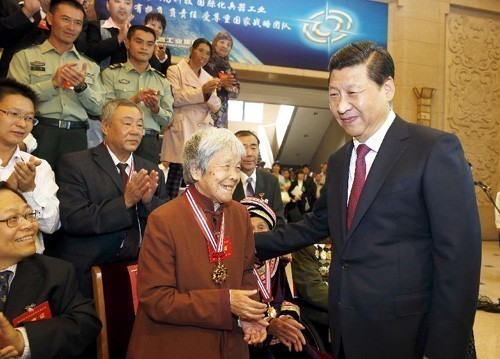 When meeting with 54 national moral models in September 2013, Xi especially introduced Gong Quanzhen, the widow of General Gan Zuchang, a founding general of the People’s Republic.

Xi expressed his greatest respect for Gong who returned with her husband to the countryside and devoted her life to teaching children and helping locals in the mountainous region. "We must carry forward the spirit of hard work and plain living generation by generation," Xi stressed to the attendees.

Before the 2016 Spring Festival, Xi came to Jiangxi Province and visited Gong again. In November 2013, during an inspection tour to the central province of Hunan, Xi visited Shibadong, a Miao minority village labeled "poor" at the time.

"What should I call you?" asked a villager Shi Pazhuan when she welcomed Xi into her improvised home, where walls were dark with energy-saving lamp being the only "electrical appliance". “This is President Xi, the general secretary”, the village officer told her. "I am a servant of the people," Xi introduced himself.

After learning that Shi was 64 years old, Xi said, “You are my elder sister.”

Serving food to an aging man 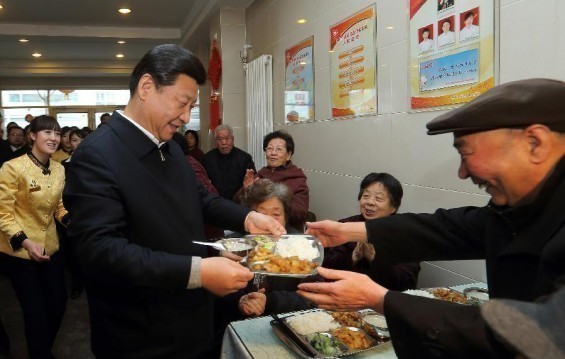 Xi visited a nursing home while inspecting Lanzhou, northwest China’s Gansu Province in February 2013. Once he arrived, he warmly greeted the elders: " I came to wish you a happy New Year!”

It was lunchtime then, and Xi went straight to Yang Lintai, a 72-year-old man, and served him food after seeing there was no food in front of Yang. “Please enjoy it”, Xi said while handing over the plate.

"The party and the government care for the elderly," Xi said. "We hope you can live a good life, be healthy and happy, and spend your twilight years in comfort".

Under Xi's leadership, the country has over the past few years formulated a series of measures to boost elderly care and witnessed a marked improvement in the lives of senior citizens.