Heartbreak and joy as rescue efforts continue at collapsed hotel 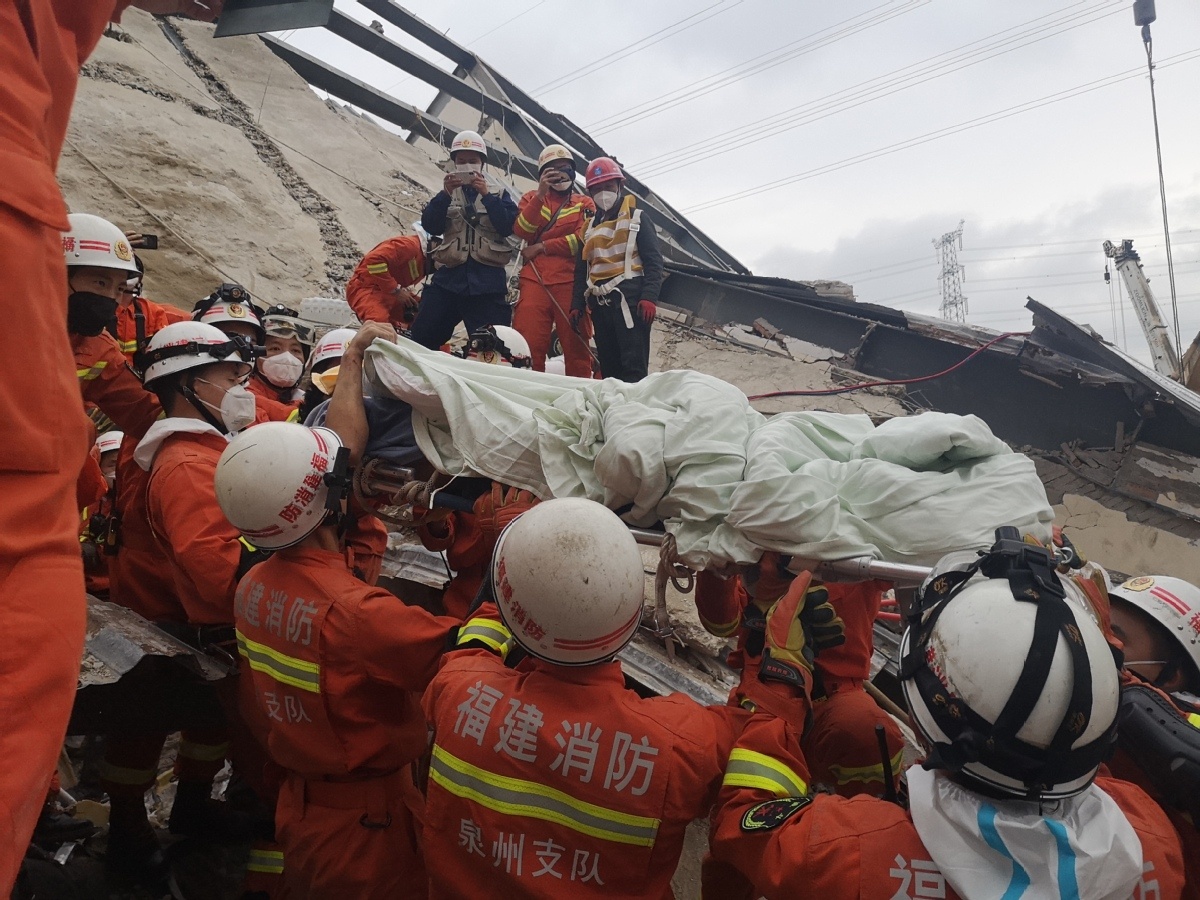 Rescuers manage to get a man out from the rubble about 69 hours after the collapse in Quanzhou, East China's Fujian province. (Photo: chinadaily.com.cn)

Rescuers on Tuesday experienced both heart-breaking and joyful moments as more people trapped in a collapsed hotel in Quanzhou city, Fujian province, were dug out from the debris.

About 69 hours after the collapse, rescuers managed to get a man out from the rubble after three hours of digging. And, he was still alive.

At about 11:05 pm on Monday, rescuers also saved a mother and her son after they had been buried for 52 hours.

However, miracles do not happen all the time. Rescuers experienced a sorrowful moment in Tuesday morning when they retrieved the bodies of two children, reportedly aged two and four, from the collapsed building.

Official data shows that as of 4:40 pm on Tuesday, 62 people had been pulled out of the debris of the Xinjia Hotel, and among them 20 had died. At the time of the collapse, which was 7:15 pm on Saturday, a total of 71 people were trapped.

Although the rescue has been increasingly challenging as time goes by, more than 1,000 rescuers were still trying their best to search for the nine people who remain missing.

"The biggest challenge now is to remove the wreckage over those trapped while avoiding further injury to them after finding their locations," said Ye Zhiyong, a commander with the Fujian fire rescue team.

"Never give up as long as there is still a gleam of hope," he said at a press conference on Tuesday in Beijing.

Shang made it clear that a preliminary probe has shown the illegal renovation of the building is to be blamed for the tragedy.

"This is a workplace accident caused by human factors," he said, calling for a thorough investigation to identify the cause of the accident and hold those responsible accountable.

Construction on the building began in 2013 and it was converted into a hotel in 2018 with 66 rooms. Two of the rooms on the ground floor were under renovation when the collapse occurred. The building crumbled about four minutes after a worker told the owner over the phone that a pillar had deteriorated, according to authorities.

With laws violated in its construction, the hotel also went against regulations in renovations multiple times, according to Shang.

The accident also exposed that relevant local authorities failed to fulfill their duties in supervision, and safety hazards were left without being rectified for an extended period of time, he said.

"The lesson paid with blood in the accident is astonishing," Shang said.