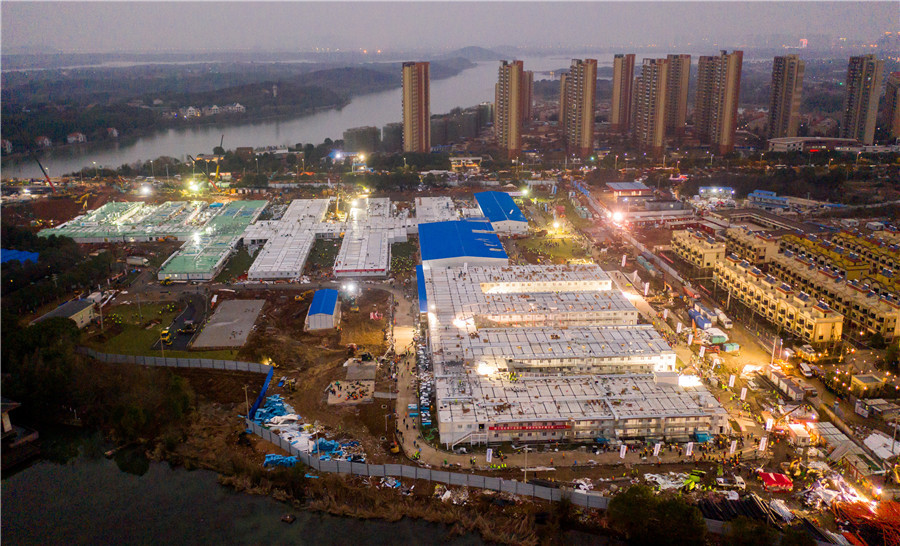 Hubei Daily photojournalist Ke Hao left his home on Jan 24, Chinese New Year's Eve, to document the fight against the novel coronavirus epidemic in Wuhan, Hubei province. He hasn't been home since.

Ke took a blanket and several changes of clothes with him. He realized that after entering hospital areas where infected patients were being treated, he would need to place himself in isolation.

Ke's disjointed routine in Wuhan has seen him working round the clock to record key moments in the battle against the epidemic. At 11 pm on Jan 24, he documented a tunnel closure that marked the transport lockdown of the city. At 3 am on Jan 26, he was at Wuhan Tianhe International Airport to take images of the first batch of overseas medical supplies arriving in Wuhan. On Feb 1, he captured the moment when three critically ill patients who had recovered were discharged from Jinyintan Hospital, a major medical facility in Wuhan treating coronavirus cases.

He went inside isolation wards three times, and every time what he saw both shocked and inspired him. "During the shoot, I was very nervous. I moved very slowly while looking around cautiously for fear of affecting the work of medical staff. I took photos and videos at the same time, just to record precious moments of how medical workers fight on the front line," he said.

Ke experienced many unforgettable moments. When he was scheduled to interview Zhang Dingyu, president of Jinyintan Hospital, he and other reporters waited for 9 hours because Zhang was too busy.

When he later learned that Zhang, 57, had amyotrophic lateral sclerosis－the neurological illness commonly known as Lou Gehrig's disease that weakens muscles and is usually fatal－he become so choked up he nearly dropped his camera.

"The crying doctor revealed the most real side of the epidemic. Our work is hard, but theirs is harder and way more dangerous," Ke said, adding that every time he went to a hospital he was deeply touched by medical workers' dedication.

On Jan 29, Hubei Daily published an article written by a person named Ke Yuming. The article said: "There was no taste of Chinese New Year at all on New Year's Eve. We had six dishes and one soup on our table, but our eldest son hadn't come back. That day, I was the only one who knew he had gone to the hospital again to conduct an interview. We were very worried. People tried to avoid going to the hospital as much as they could at that time, but he chose to go in the opposite direction."

Ke Hao said colleagues who read the article asked him if it was referring to him.

"It was then that I knew the author was my father and my family was suffering every day too," he said.

Ke Hao never got to enjoy those six dishes with his family. On New Year's Eve, after he completed his work, he ate a bowl of noodles alone in his hotel in self-imposed isolation.

"The environment is dangerous, but medical staff and many people from other sectors have been staying firm on the front line," he said. "As long as we all work together, we will overcome the difficulties and everything will be fine."