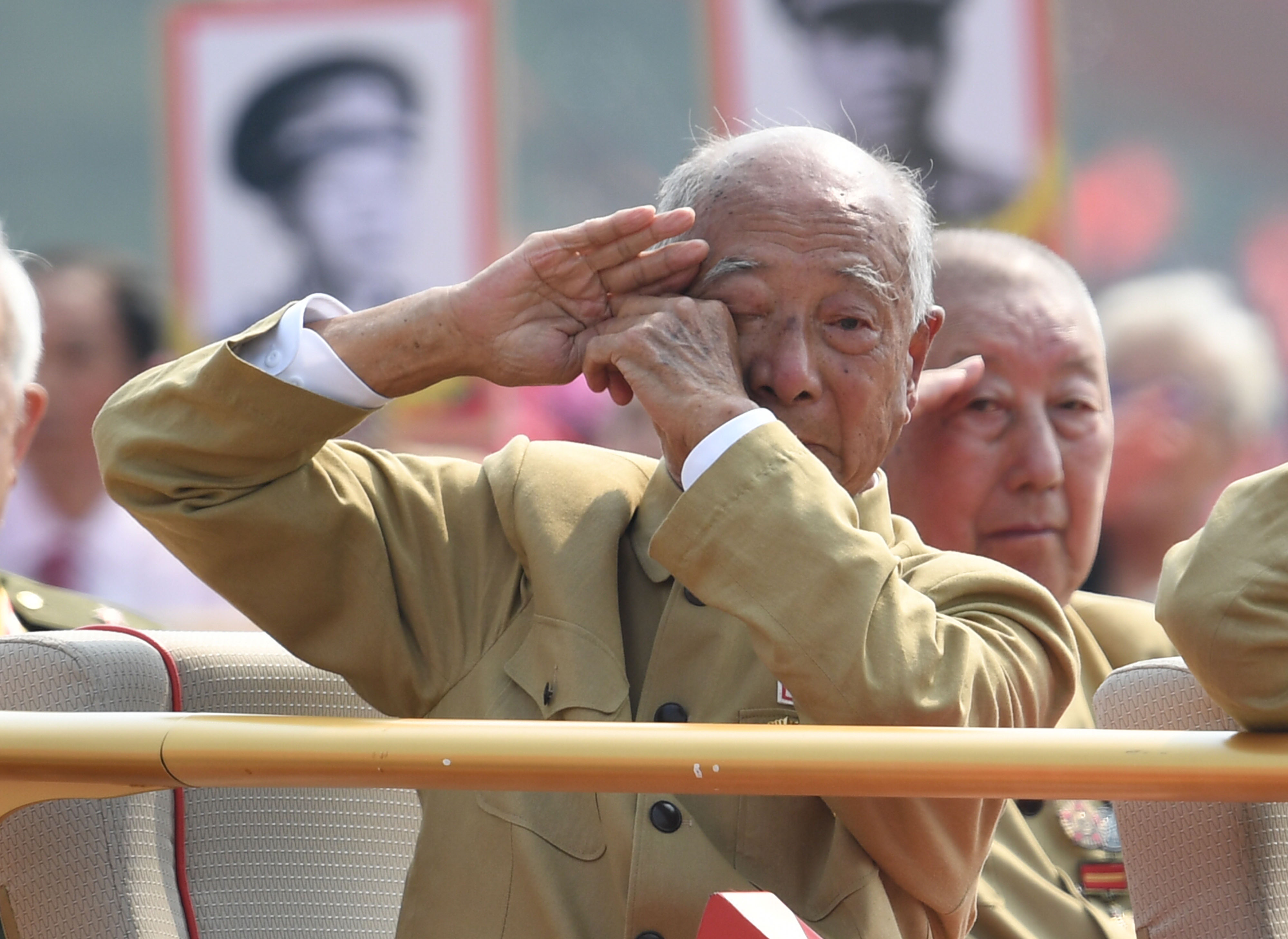 Veteran Guan Maolin salutes in a formation paying respect to state heroes during the celebrations of the 70th anniversary of the founding of the People's Republic of China (PRC) in Beijing, capital of China, Oct. 1, 2019. (Photos: Xinhua) 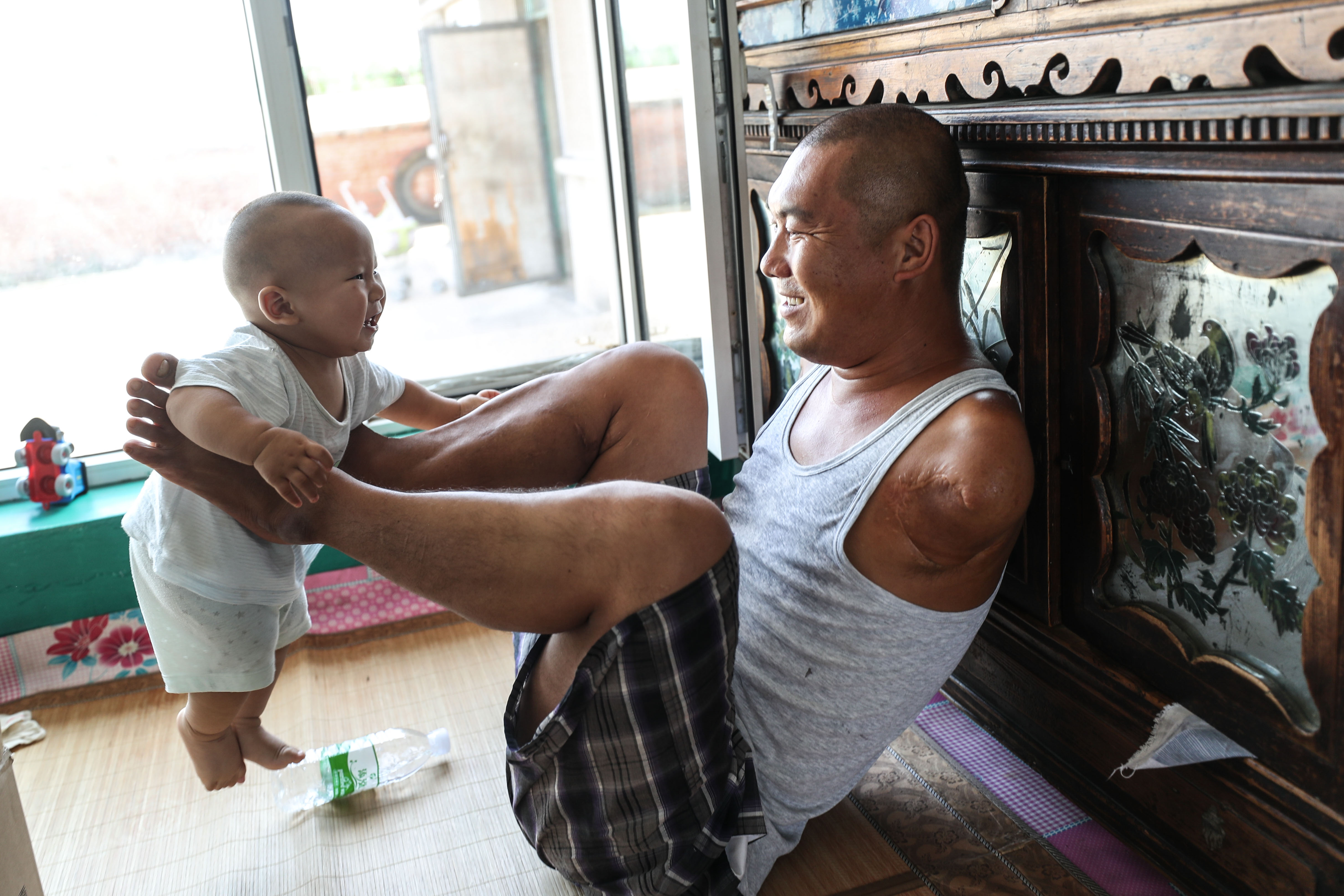 Wang Gang plays with his son Rourou at home at Hexi Village of Liangjiazi Township, Changtu County of Tieling City, northeast China's Liaoning Province, Aug. 8, 2019. Wang Gang, a 33-year-old villager from Hexi Village of Liaoning Province, lost his arms due to an accidental electric shock at the age of 13. After years of hard practices with his feet, he can not only take care of himself but also do some simple housework and take care of his sick mother. Wang Gang got married with He Xiaoman four years ago and had their son Rourou in October of 2018. The birth of Rourou brings great joy to this family, and Wang Gang puts all his heart to take care of his son and the family. Though he is not a perfect father, he will be the most diligent one, the armless father said. 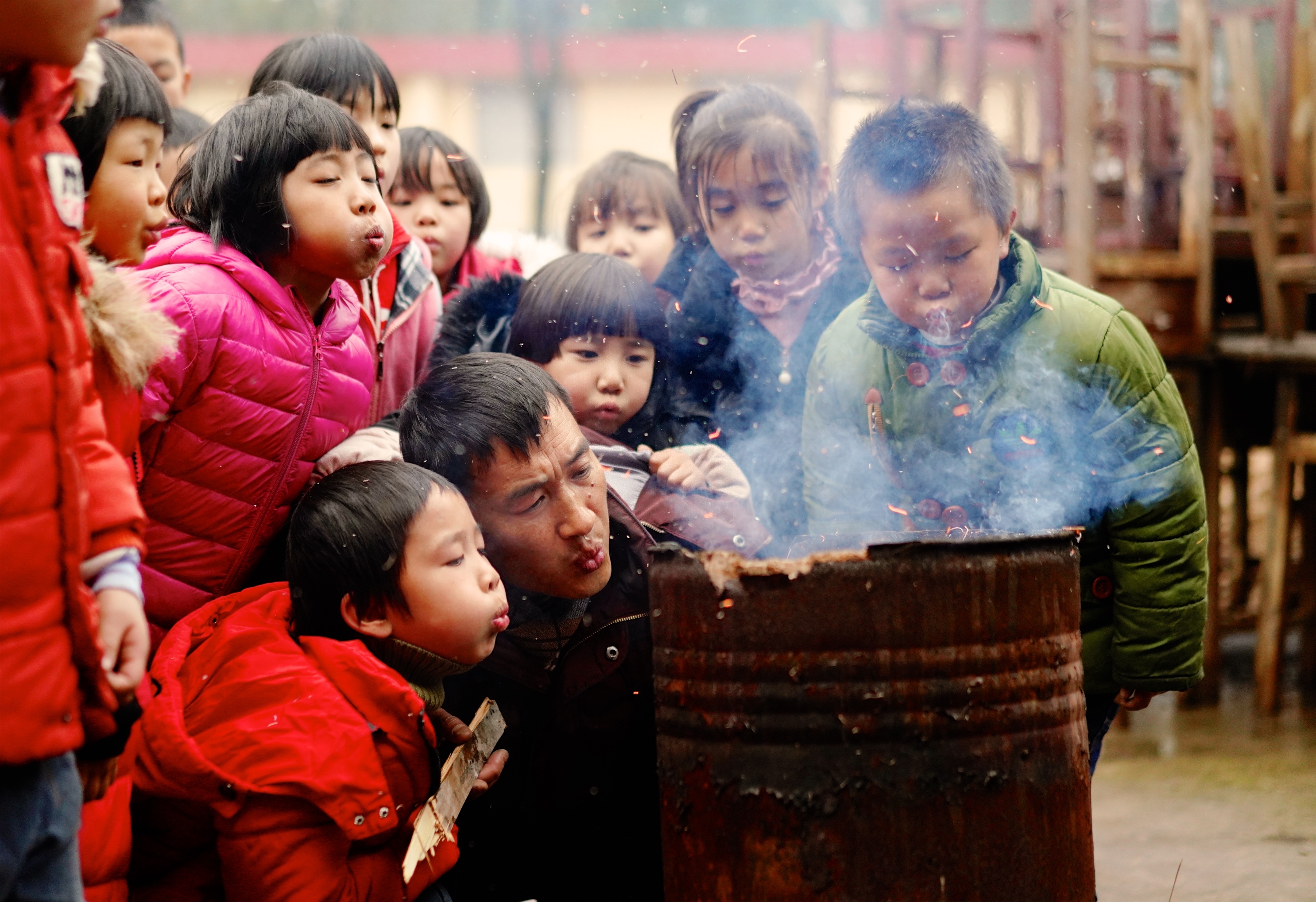 Teacher Zhang Zhanliang (R, front) and his students blow to make a fire at Huangni Primary School in Chuntao Town of Yingtan City, east China's Jiangxi Province, Jan. 3, 2019. Zhang Zhanliang has served as the principal of the school since September 2018. There was no canteen at the rural school, where most of the students were left-behind children. Zhang spent his own money buying food materials and made meals for the students. 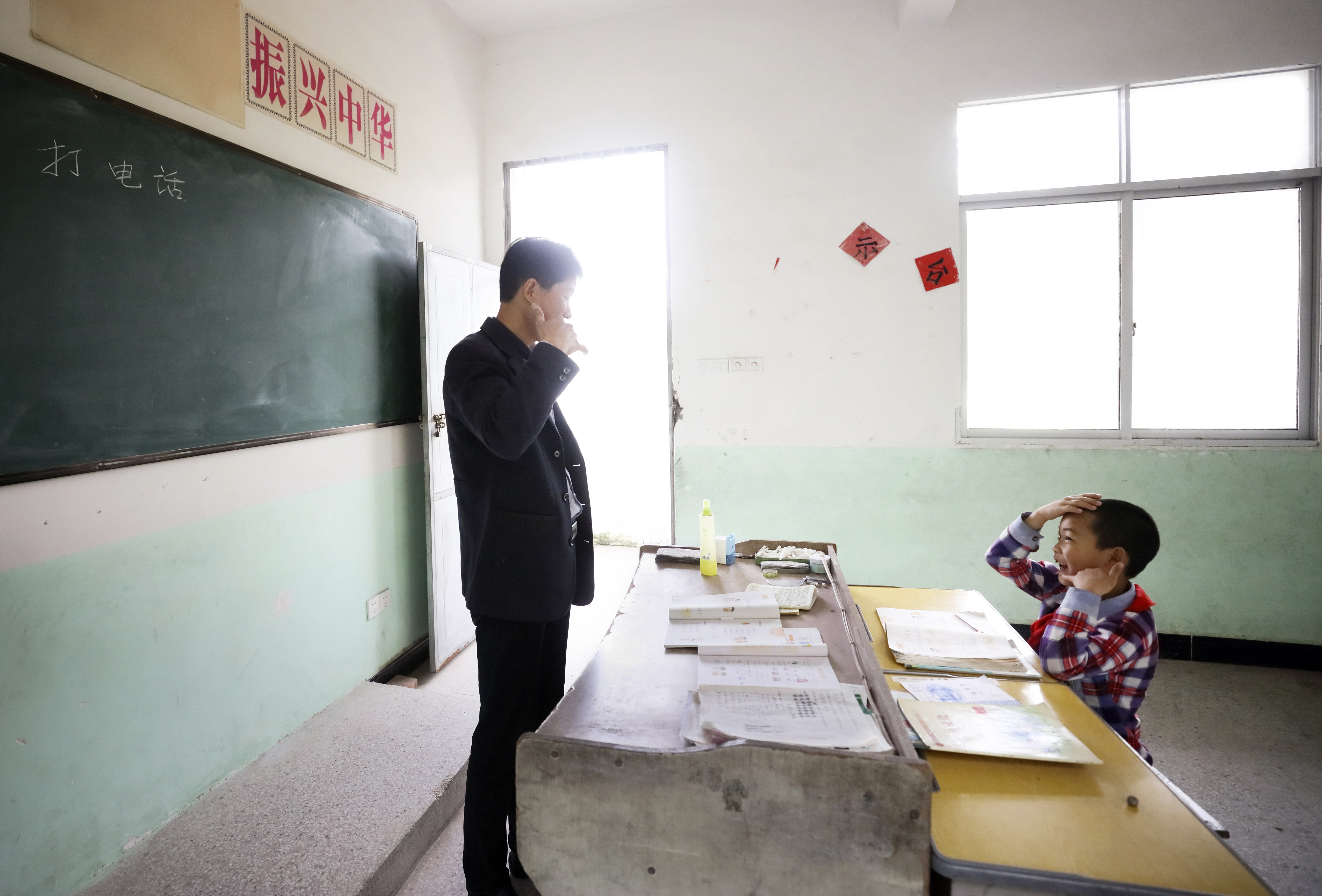 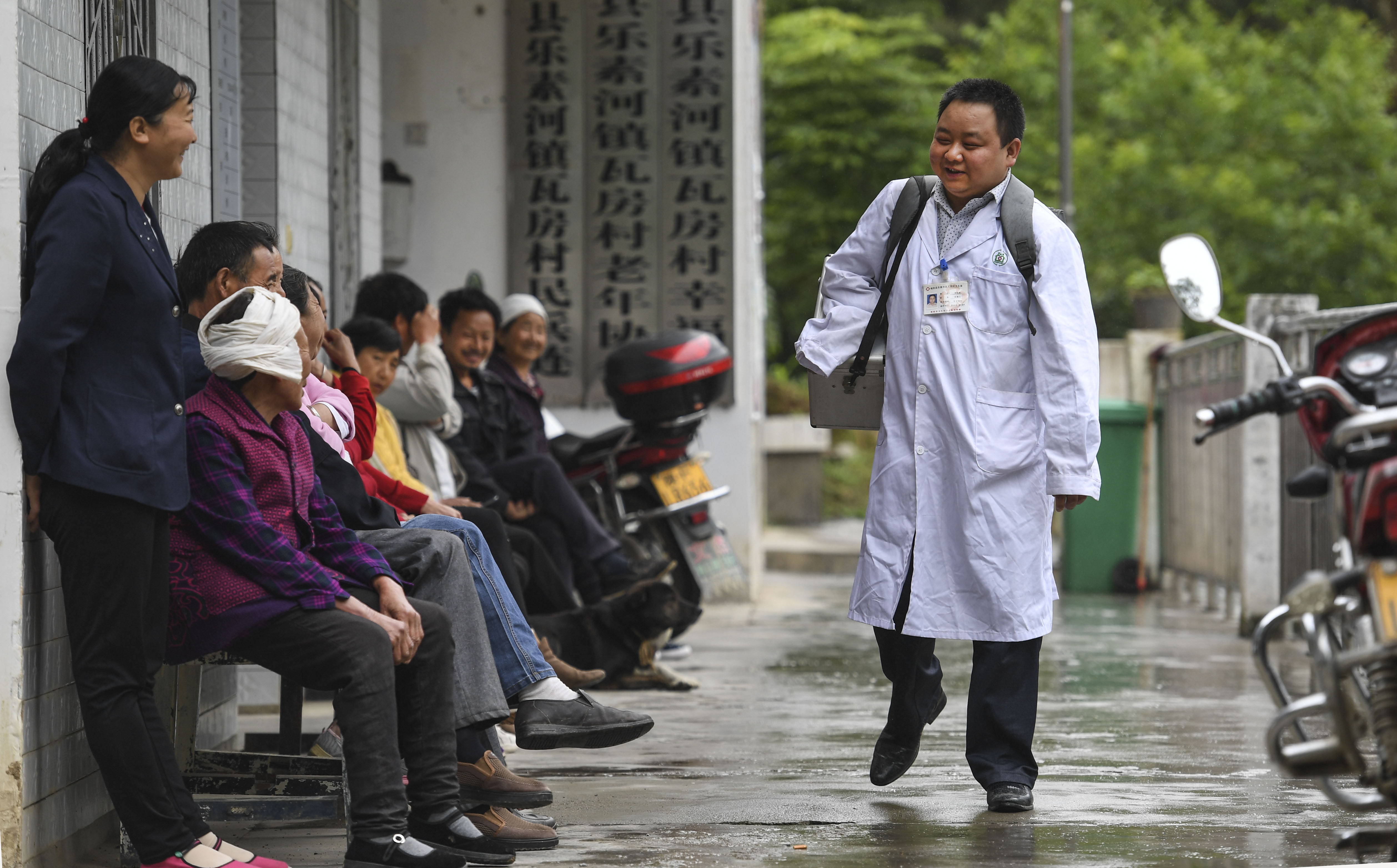 Doctor He Yongqing (R) walks back to his clinic after paying a home visit to a patient while many villagers wait at the door for consultations in Wafang Village, Lueyang County, northwest China's Shaanxi Province, May 28, 2019. He Yongqing is a village doctor with only one arm. He lost his right arm at a car accident when he was 10 years old. Now He has served as a village doctor for over ten years, and wins local villagers' hearts with his dedication. 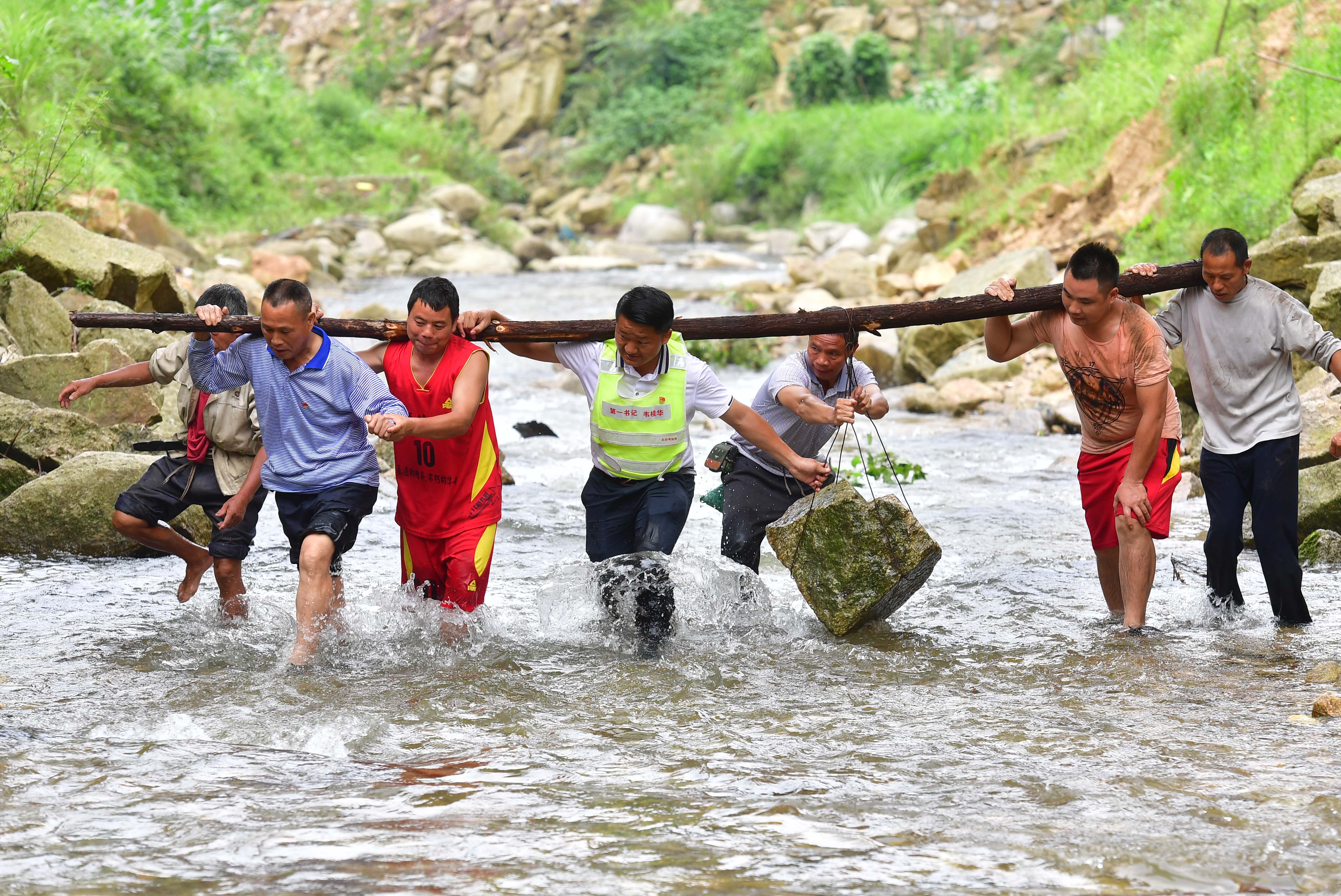 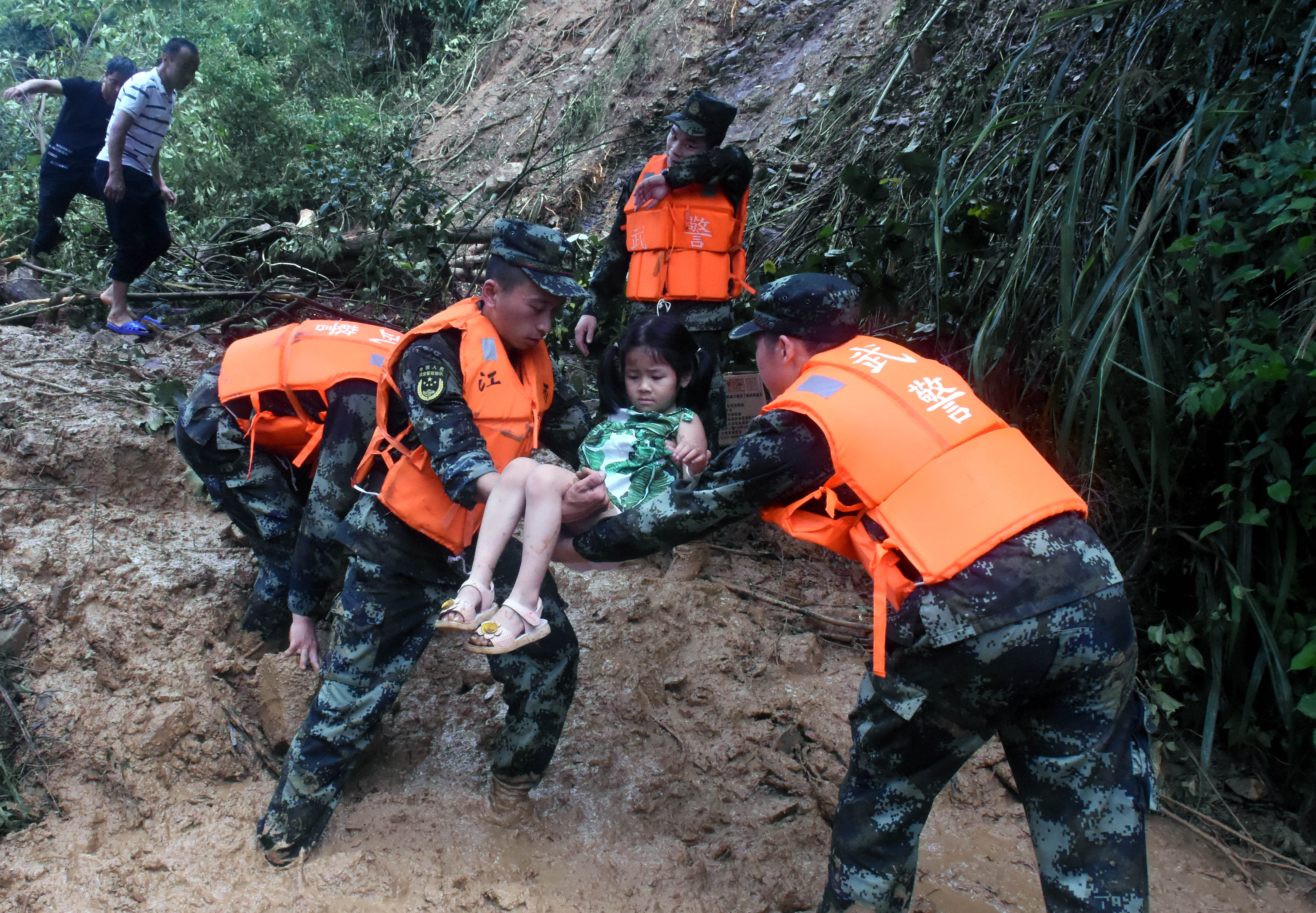 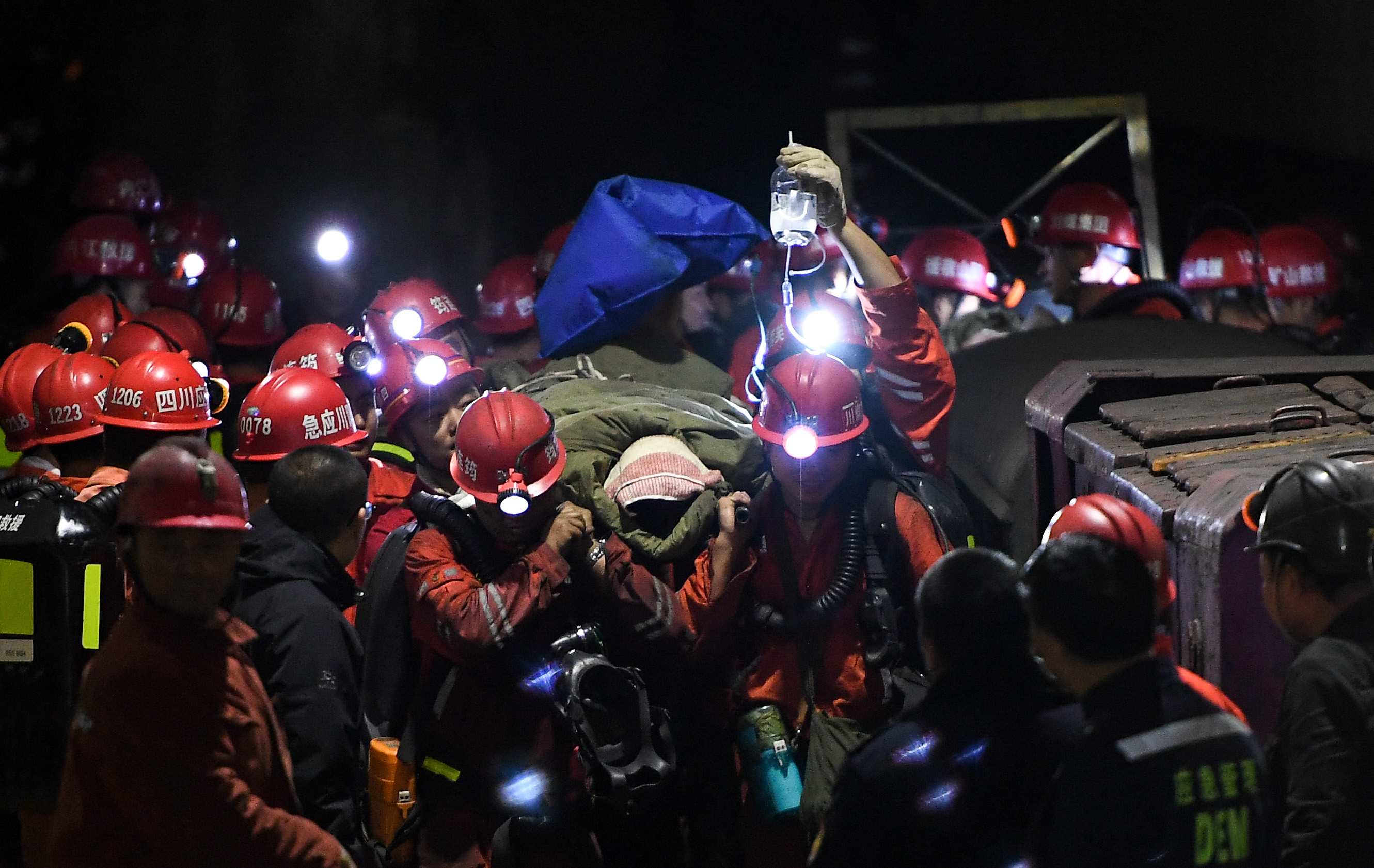 Rescuers transfer a survivor of a coal mine flooding accident at the Shanmushu coal mine owned by the Sichuan Coal Industry Group in Gongxian County of Yibin City, southwest China's Sichuan Province, Dec. 18, 2019. Thirteen miners have been rescued after being trapped for over 80 hours in the mine, local authorities said Wednesday. The accident occurred Saturday afternoon when 347 miners were working underground. A total of 329 escaped. Five people were killed in the accident. 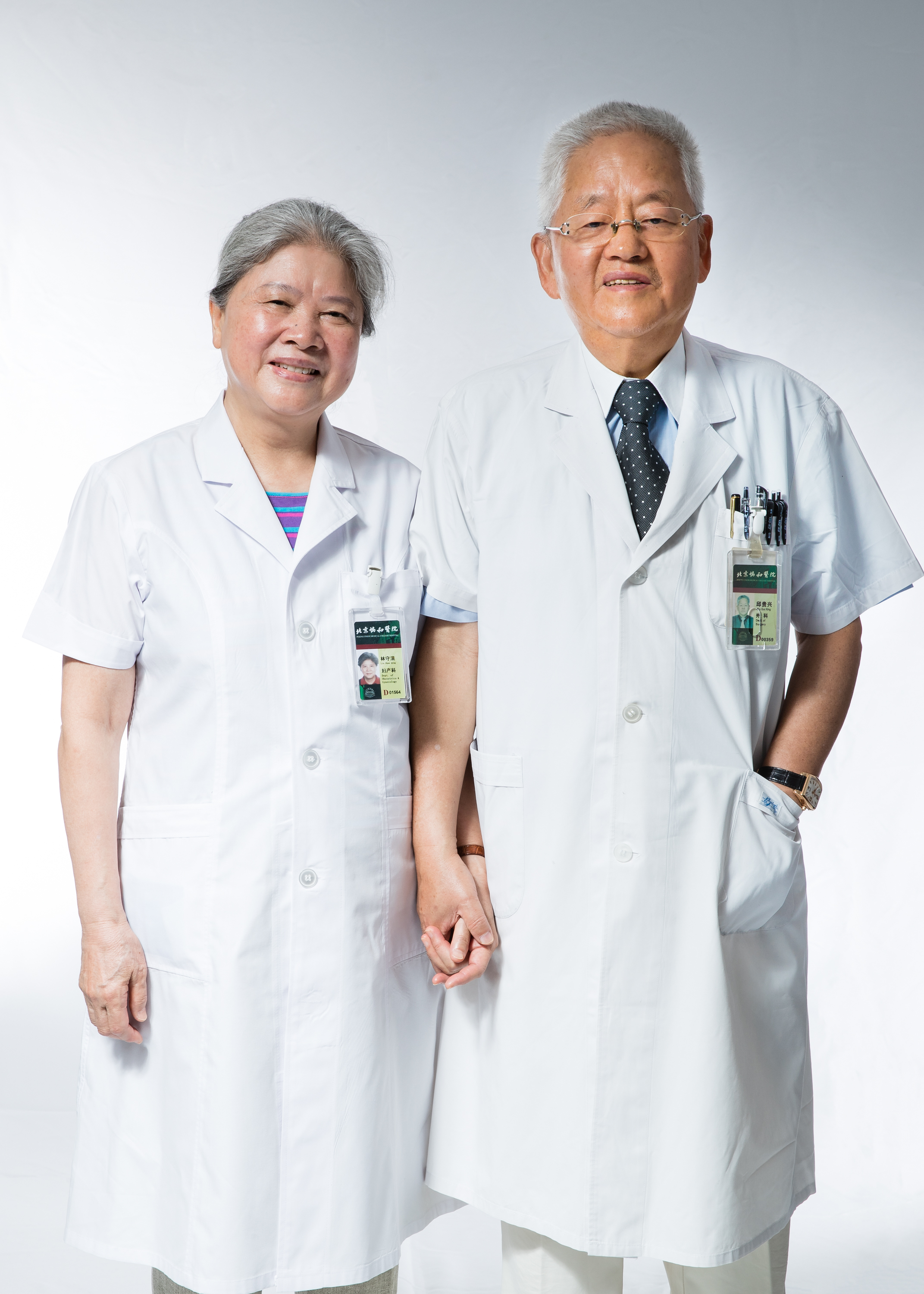 Qiu Guixing (R), academician of Chinese Academy of Engineering and chief physician of orthopedics department, and his wife Lin Shouqing, chief physician of gynaecology and obstetrics department, pose for a photo at their work place of the Peking Union Medical College Hospital in Beijing, capital of China, Aug. 12, 2019. China has about 3.6 million qualified physicians and 4.1 million registered nurses. They have formed a strong force to support the most significant medical service system in the world of safeguarding the health of 1.4 billion people in the country. 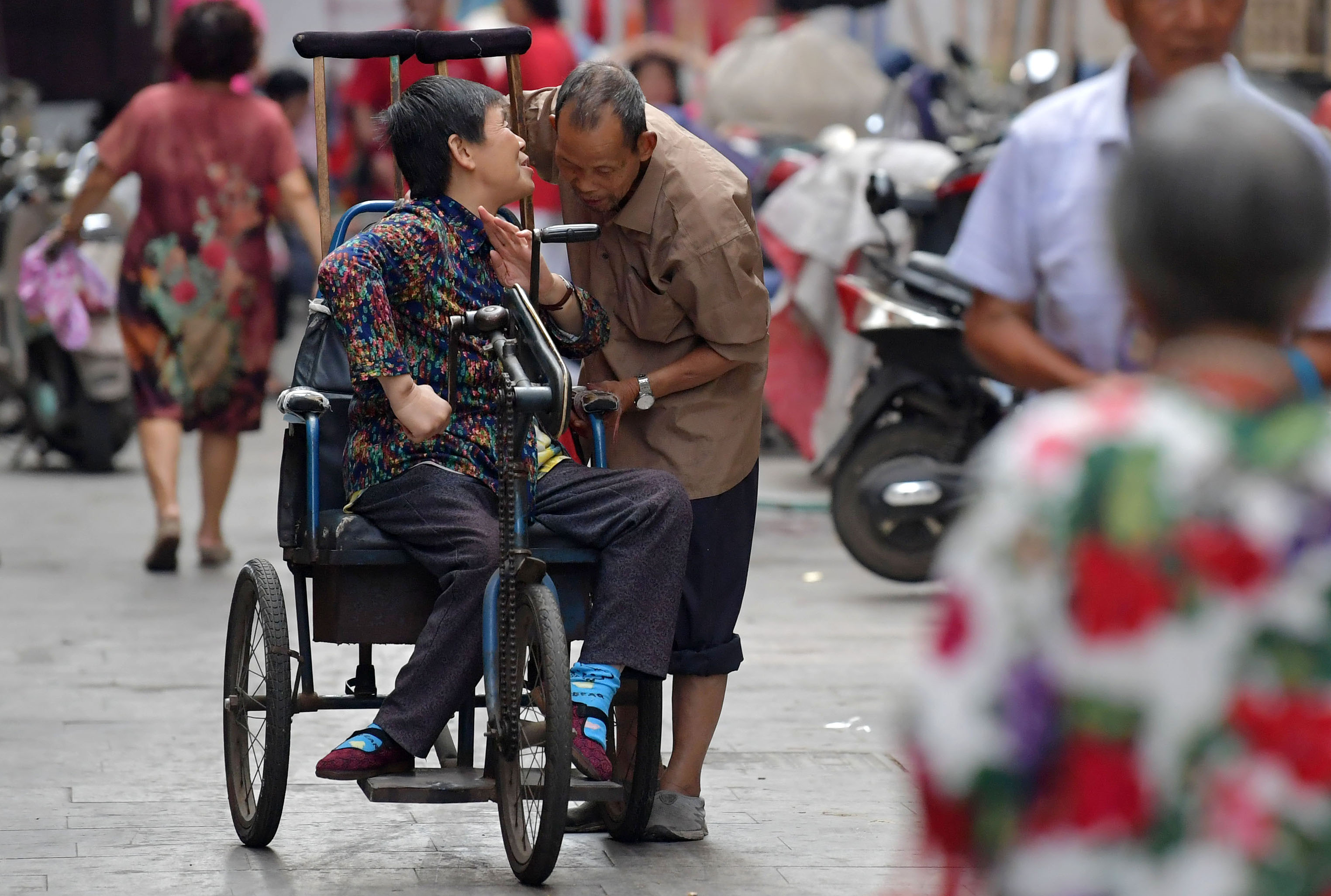 Ye Wenjuan (L) explains the shopping list to Xiong Jin'gen in Nanchang, east China's Jiangxi Province, Oct. 2, 2019. Xiong Jin'gen, 74, hearing-impaired, has been married with Ye Wenjuan, 67, who suffers inability to move caused by poliomyelitis, for 37 years. Despite of physical disabilities, the couple makes a great team to get over daily obstacles. Complementary to each other, the couple has built deep understanding and trust. 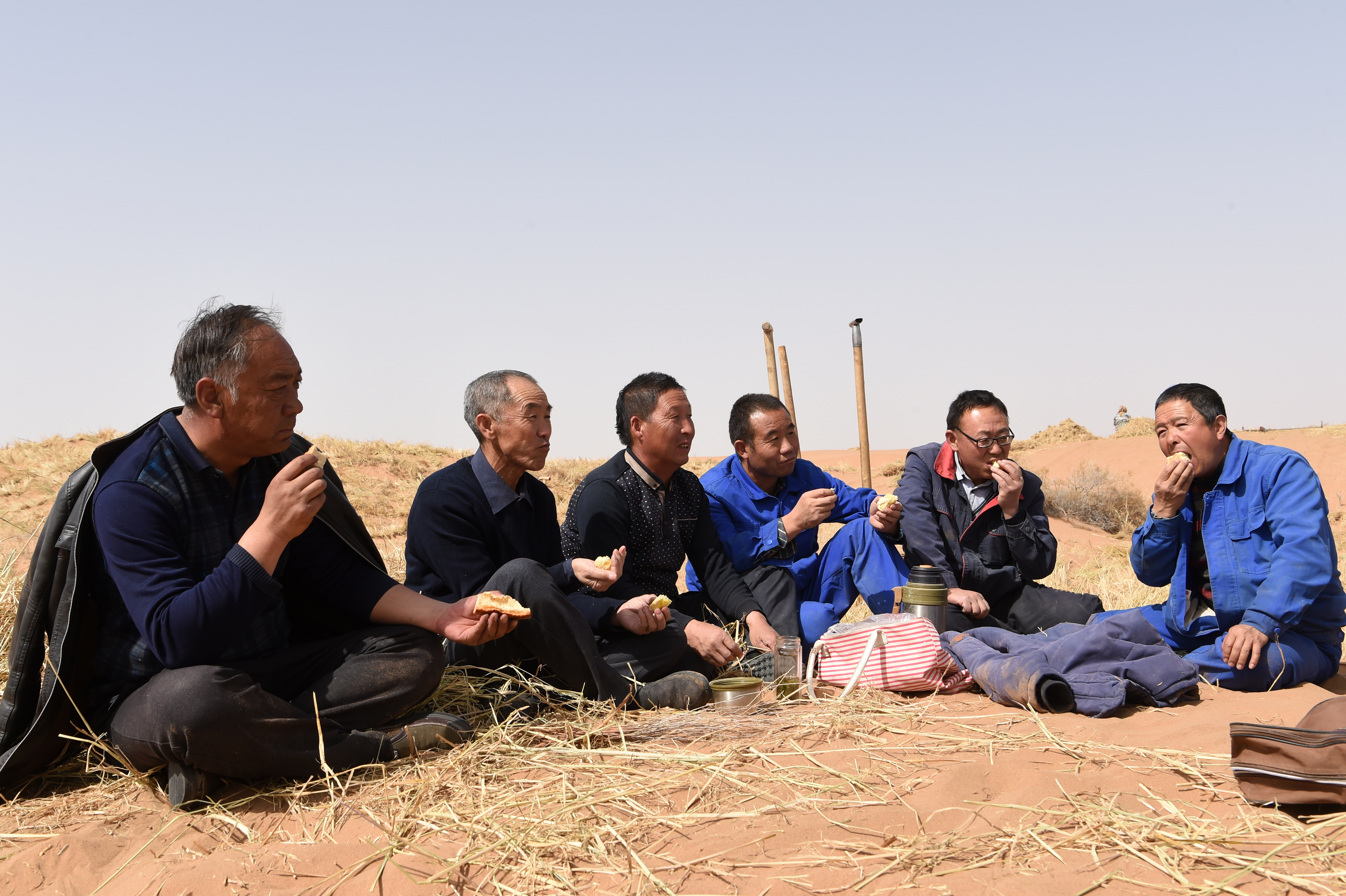 Staff members of Babusha forest farm have lunch during a break after work to prevent and control desertification in a desert in Gulang County, northwest China's Gansu Province, March 26, 2019. 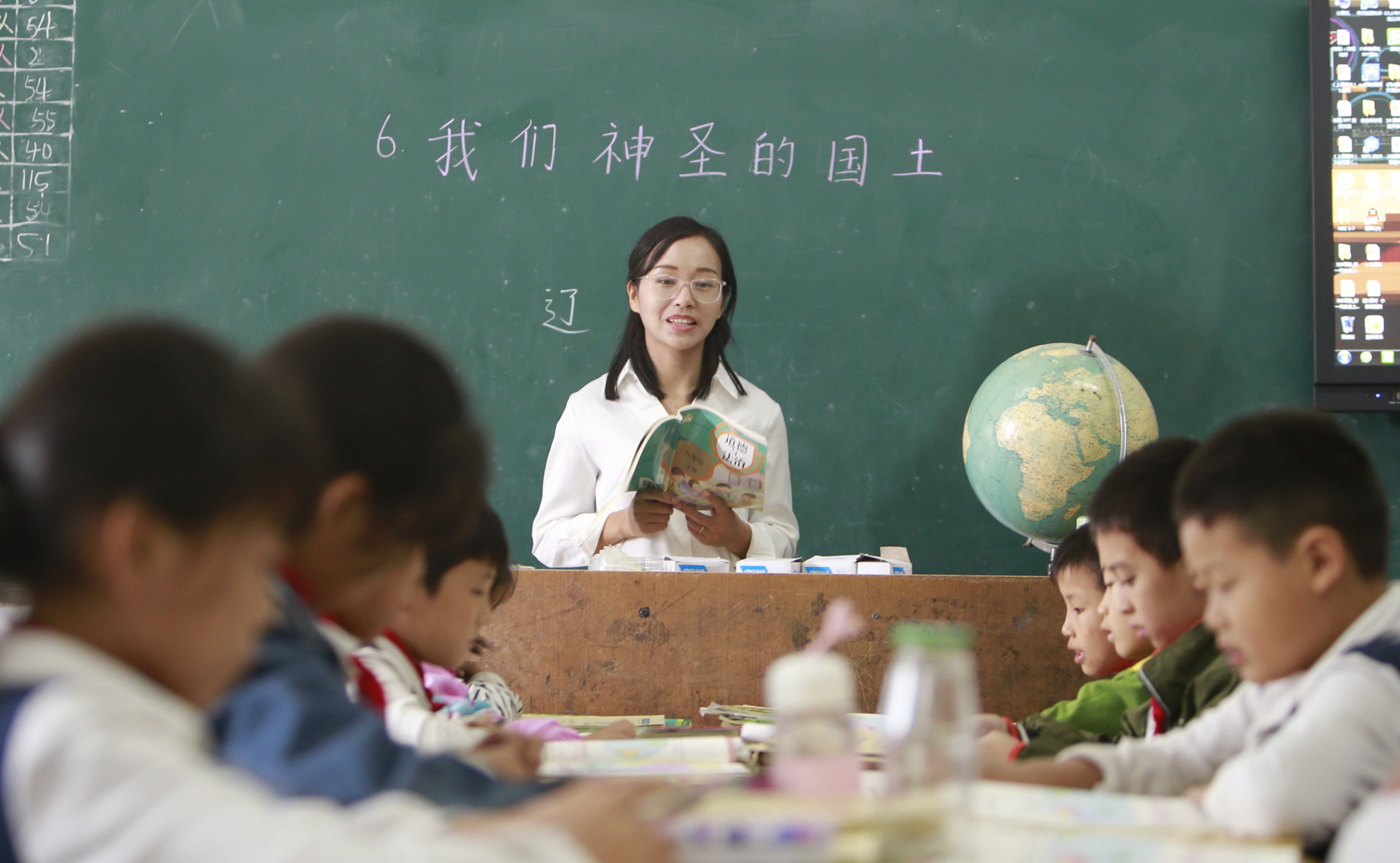 Fang Rong gives students a lecture at Hope primary school in Luotian County, central China's Hubei Province, Oct. 11, 2019. Fang Rong, 29, is the headmaster of Hope primary school of Luotian County, her alma mater. Born in a poverty-stricken region, Fang Rong was a left-behind girl. Thanks to the Hope Project and people's aids, she succeeded in graduating from a secondary normal school. To help more children and repay people's kindness, she decided to be a teacher at her alma mater. In spite of the austere way of life, Fang shouldered her responsibility from various aspects. 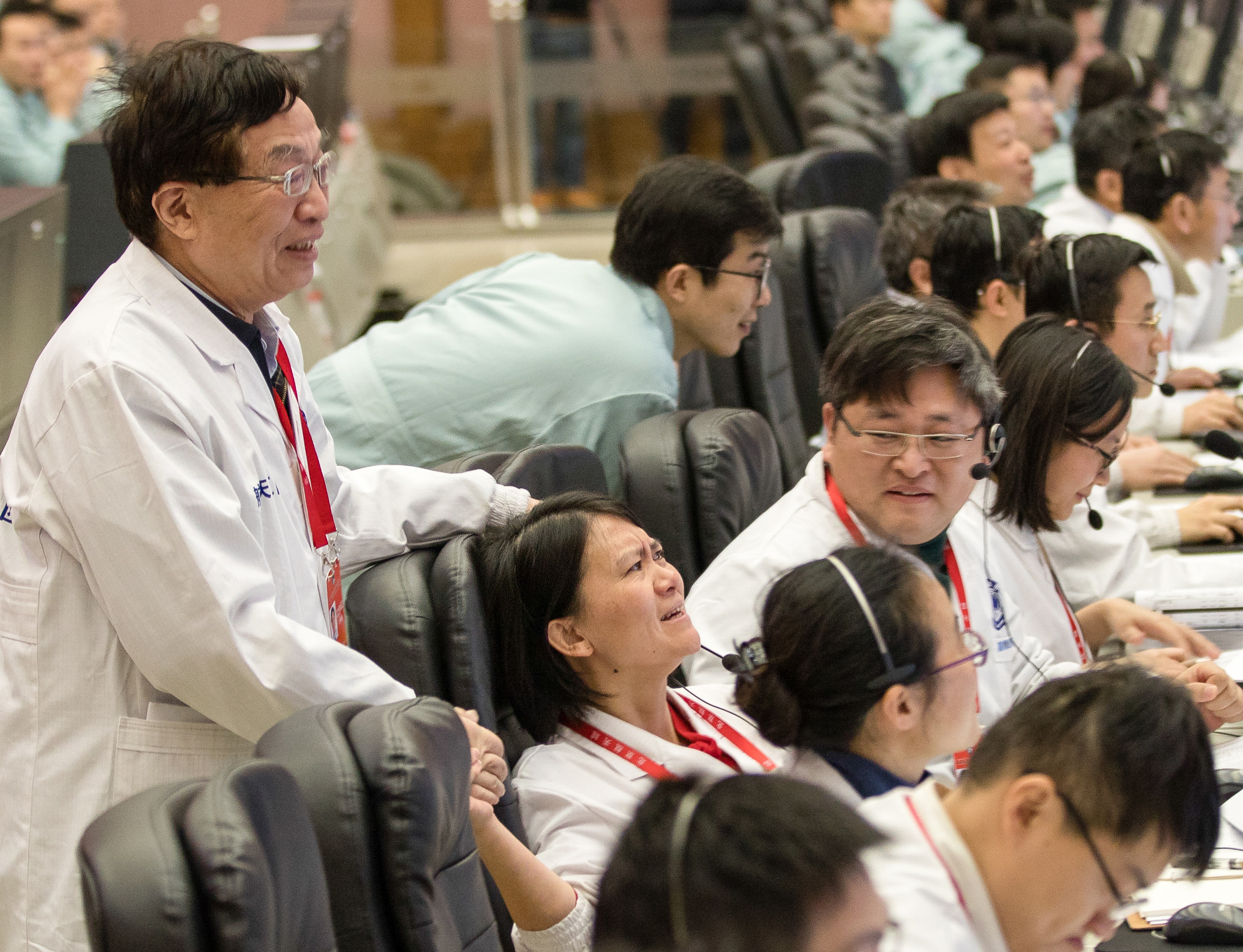 Ye Peijian (1st L), a leading Chinese aerospace expert and consultant to China's lunar exploration program, celebrates with his colleague after the landing of Chang'e-4 lunar probe at the Beijing Aerospace Control Center (BACC) in Beijing, capital of China, Jan. 3, 2019. 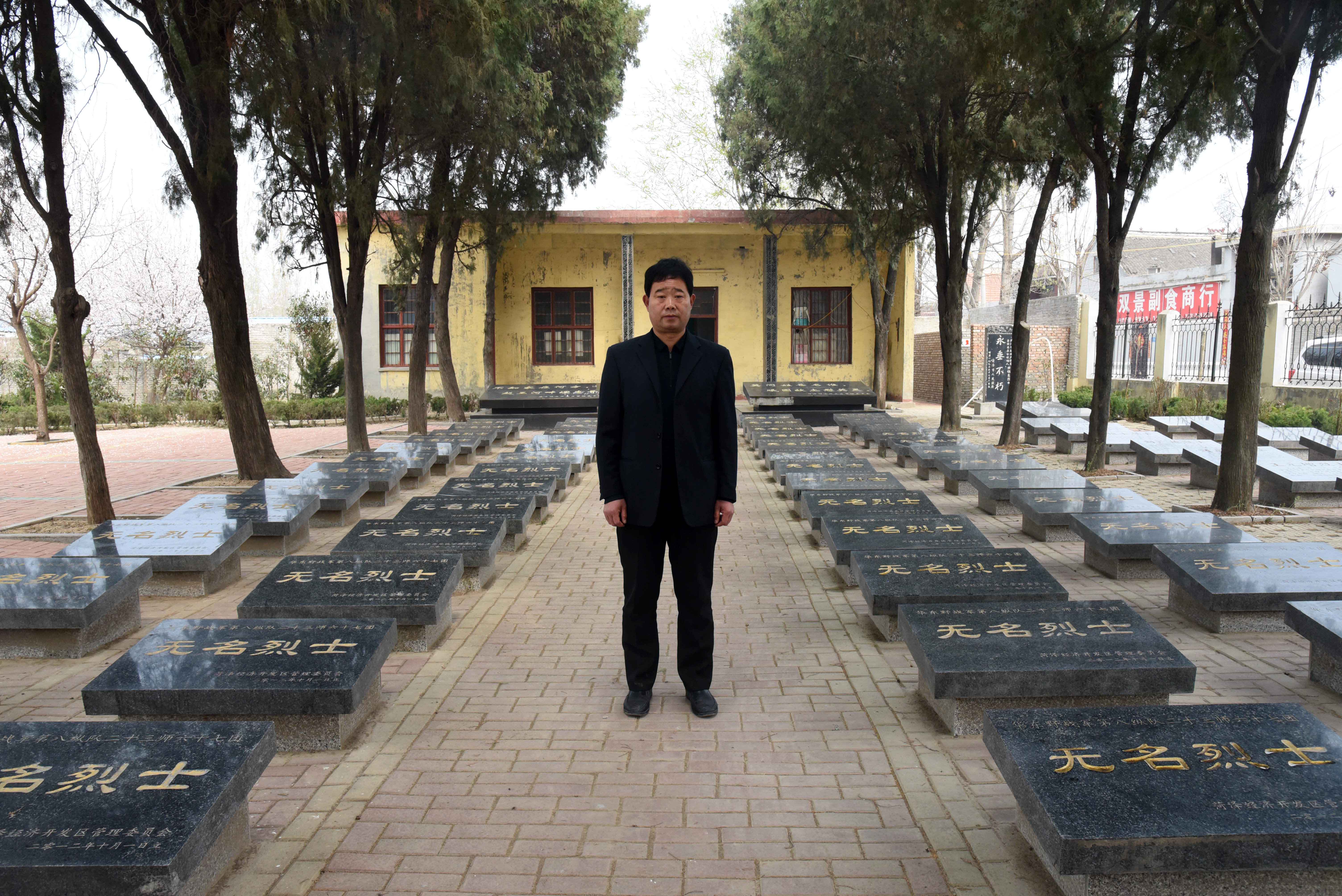 Zhang Jingxian is seen at the Zhanghezhuang martyrs cemetery in the economic development zone of Heze City, east China's Shandong Province, March 20, 2019. For 11 years, Zhang Jingxian, a veteran, has posted over 1,000 letters to help martyrs, who sacrificed in a battle occurring in Heze in 1947 and were buried here, find their families. So far, he has got family addresses for 30 martyrs. 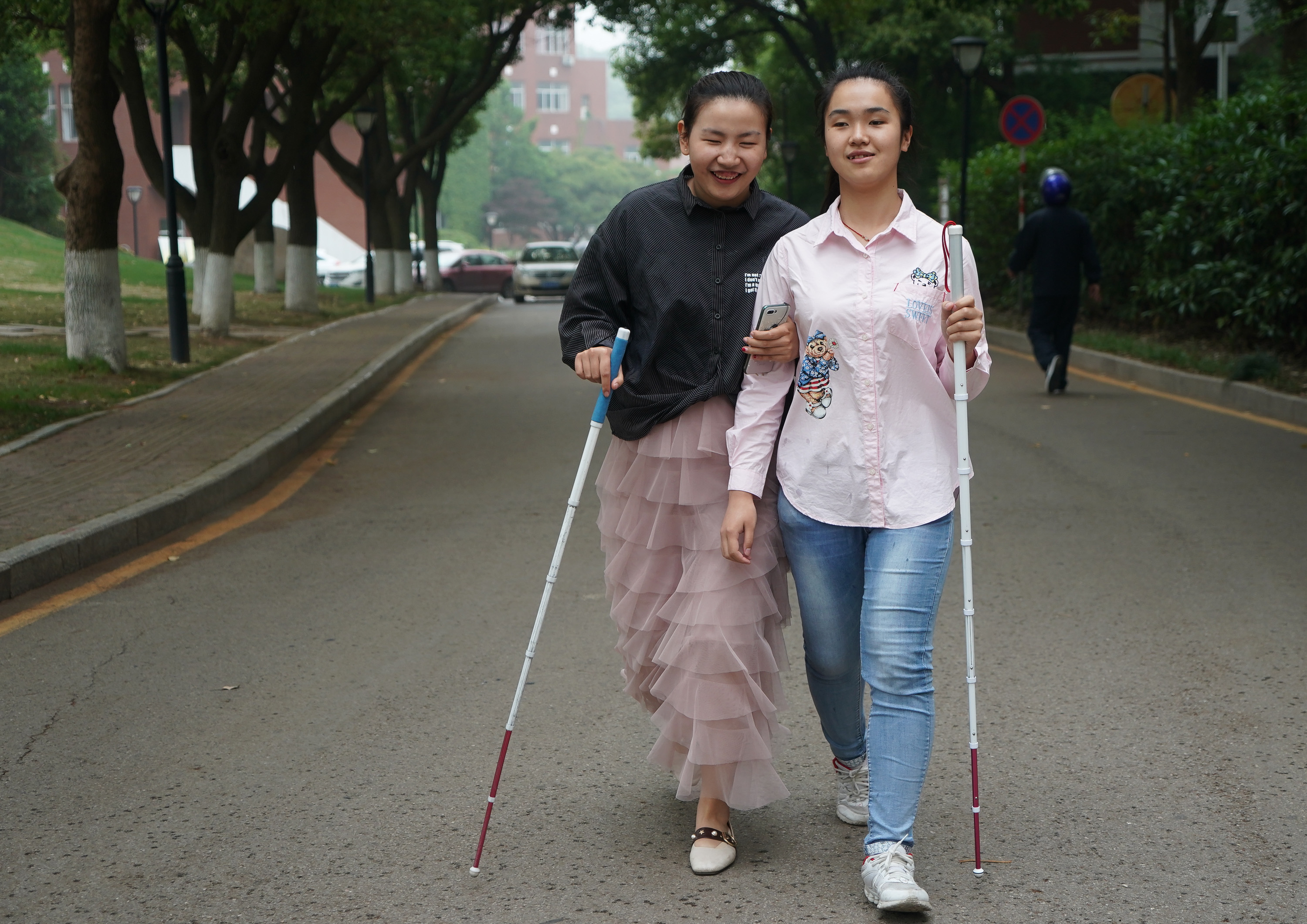 Wu Yifan (L) and Zhou Wenqing walk along the campus of Nanjing Normal University of Special Education in Nanjing, east China's Jiangsu Province, May 17, 2019. Wu Yifan, 22, and Zhou Wenqing, 21, are schoolmates in Nanjing Normal University of Special Education. Both of them lost eyesight in their childhood. In their spare time, Wu likes doing makeup, paper-cutting as well as playing Guzheng, the Chinese Zither, While Zhou enjoys playing the piano. Zhou once developed a computer game for visually impaired people.

Sanitation worker Dong Jidong cleans the streets accompanied by his handicapped wife Dong Jinxiang in Xinluo District of Longyan City, southeast China's Fujian Province, Jan. 9, 2019. Due to femoral head necrosis disease, Dong Jinxiang has been living on a wheelchair for about a decade. To take care of his handicapped wife, Dong Jidong, who himself has been afflicted with ankylosing spondylitis, gave up his work in a cement plant and chose to clean the streets near their home two years ago just in order to take better care of his wife. Everyday, Dong Jidong works in the streets with his wife's companionship. 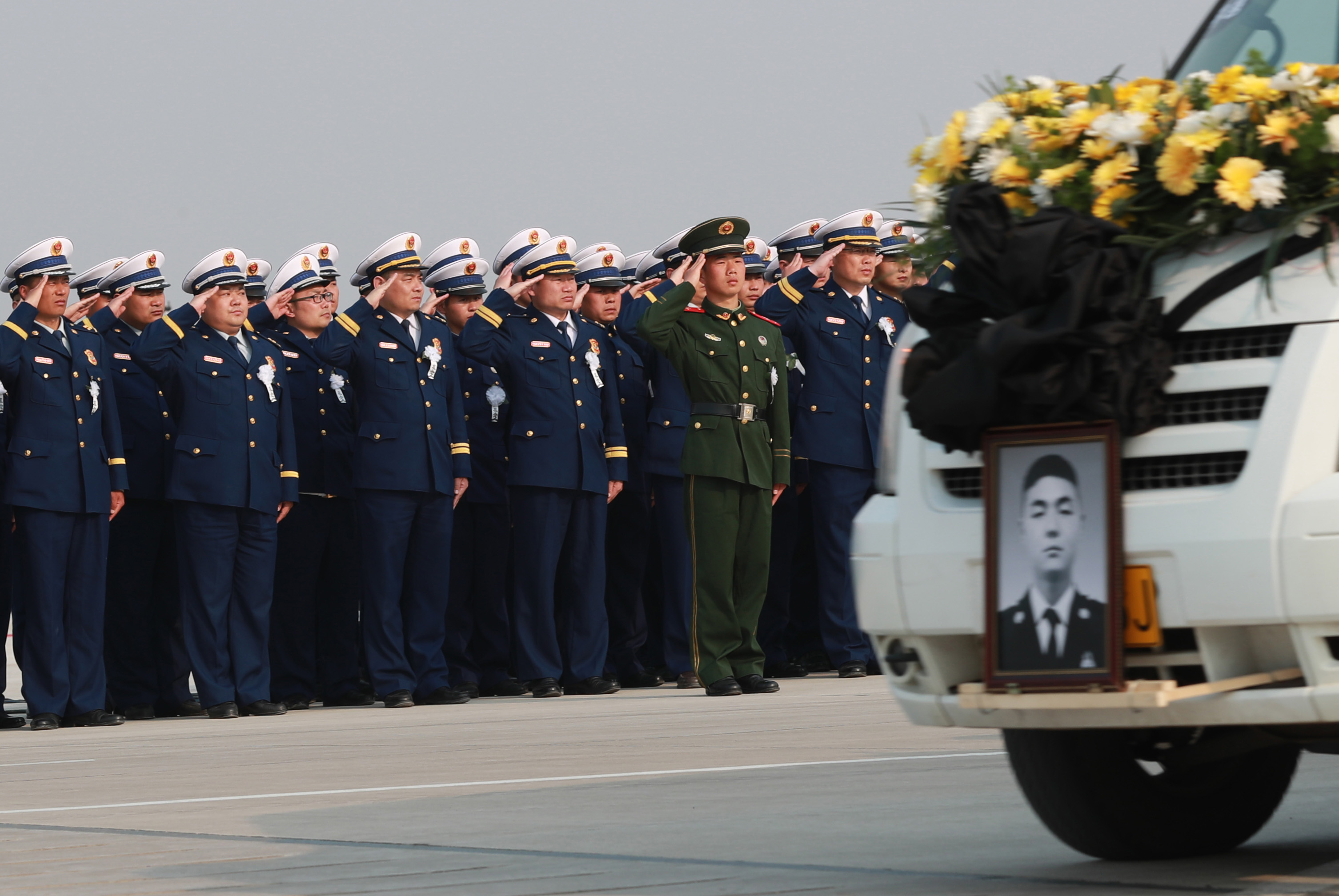 People salute to the bone ashes of firemen, who died while fighting a forest fire in Muli of Sichuan, when they are sent back hometown in Linyi City, east China's Shandong Province, April 5, 2019. 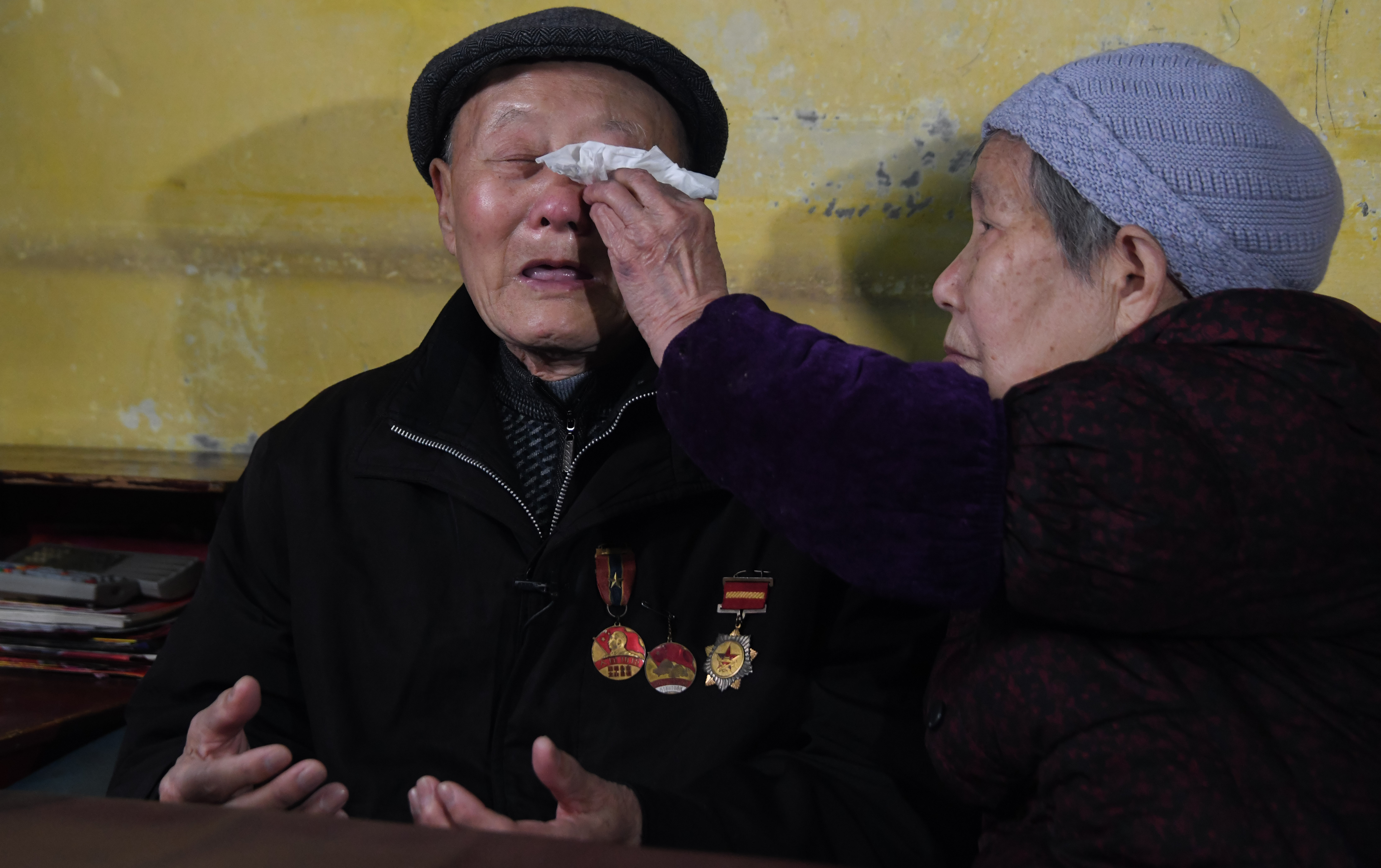 War hero Zhang Fuqing tears when he recalls the sacrifices of his comrades-in-arms on March 31, 2019. Zhang served as a soldier with the Northwest Field Army, one of the main forces of the Chinese People's Liberation Army during the Liberation War. He was twice awarded the honorary title of "Combat Hero." In 1955, Zhang retired from the army and chose to work and devote his life to the poverty-stricken mountainous areas in Laifeng, a remote county in central China's Hubei Province. For more than 60 years, he deliberately kept his past achievements a secret, even from his children. It wasn't until the end of 2018 when authorities were collecting and recording veterans' information that his life story was revealed. 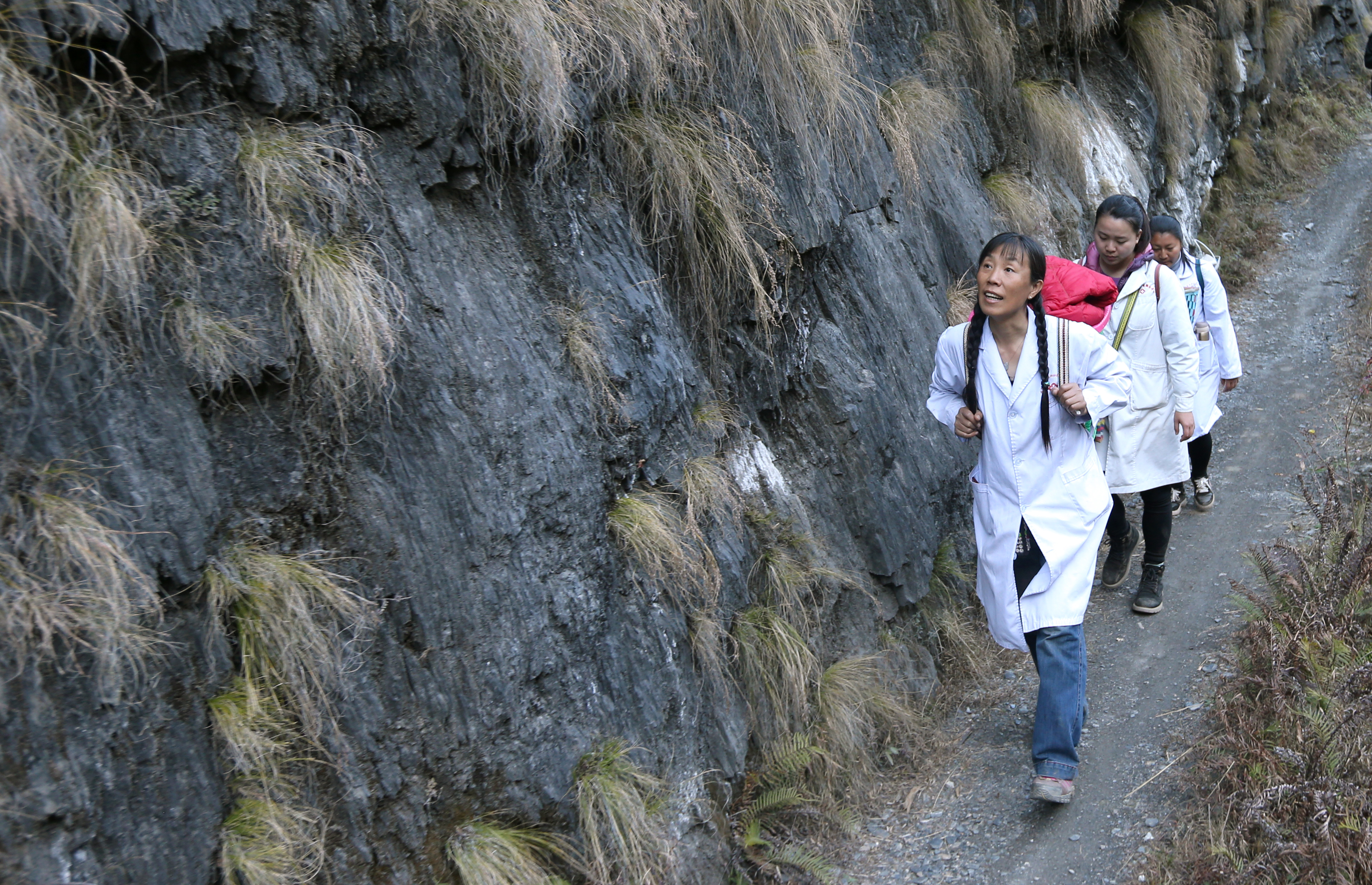 Guan Yanping (Front) and her colleagues walk on the mountain path in Bingzhongluo Township in Lisu Autonomous Prefecture of Nujiang, southwest China's Yunnan Province, Jan. 13, 2019. In almost two years of working as a volunteer doctor to offer medical assistance in Bingzhongluo Township, Guan Yanping has trekked over 300 times on the steep and narrow mountain paths to treat people in 46 villages. To access some villages without linking of highways, Guan and her colleagues had to shoulder medical equipment like electrocardiogram and B ultrasound with baskets. For the sake of villagers' health, Guan extended her service period from the original six months to three years. 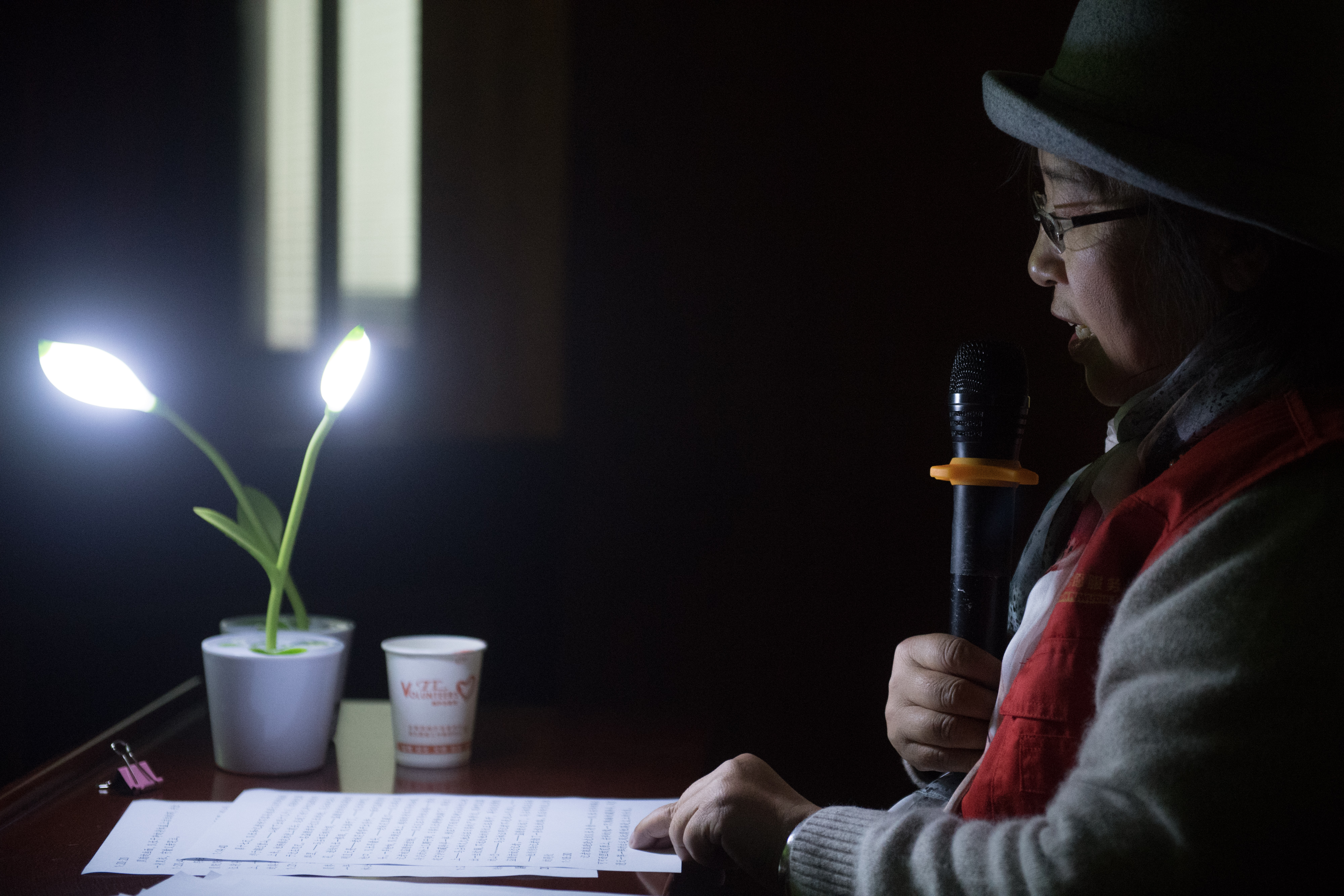 Wu Suhuan reads her script to narrate the film "Kekexili: Mountain Patrol" for visually impaired people in Tonglu Branch of China Braille Library in Tonglu County, east China's Zhejiang Province, April 11, 2019. Wu Suhuan, 65, is a progressive muscular atrophy patient and has been paralyzed for decades. Dedicated to working as a narrator for barrier-free movies, she has so far written scripts for four movies and read them along with the movie for the visually impaired since 2015. "I feel happy and fulfilled in helping them," said Wu. 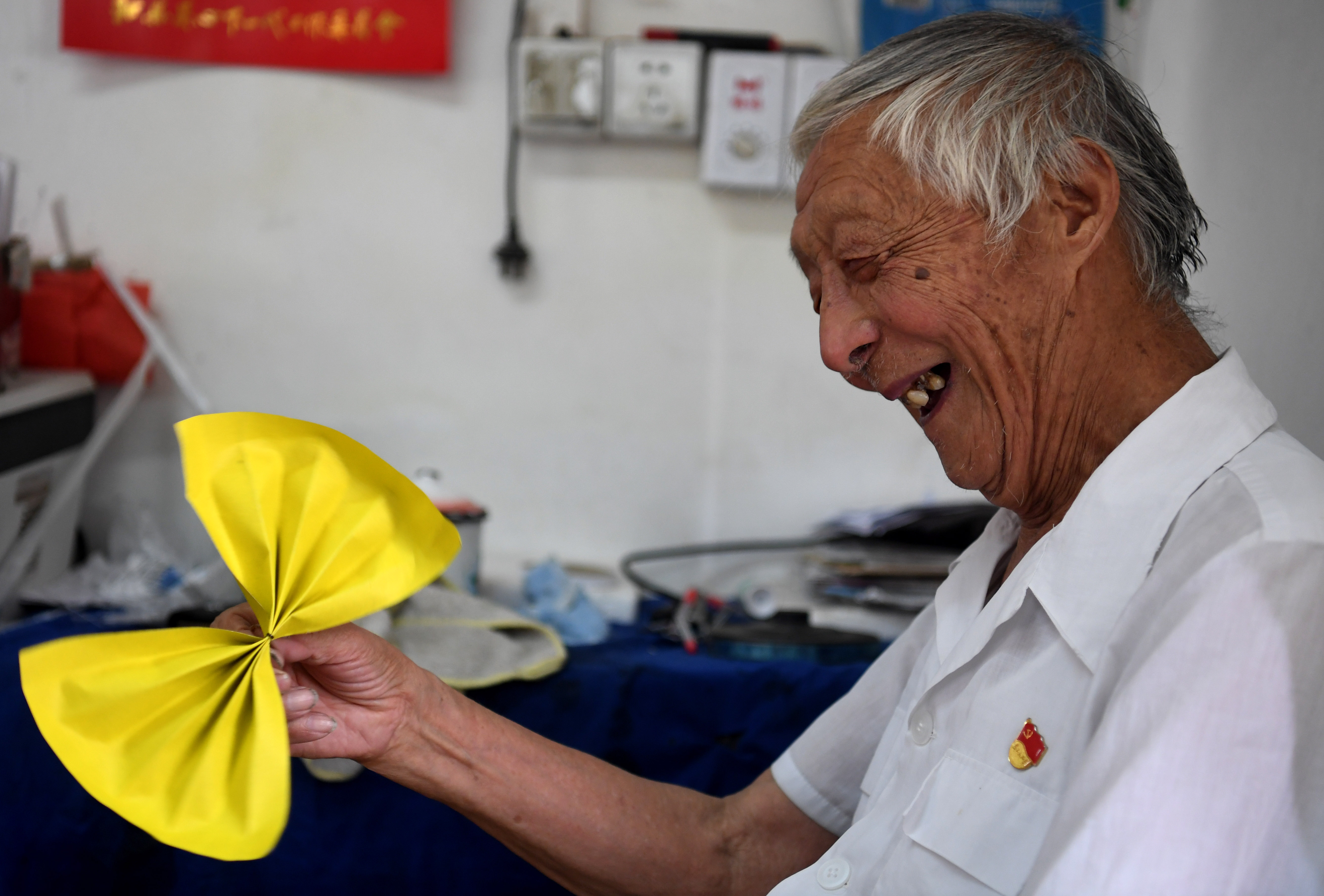 Ye Lianping smiles with a paper folding gift given by left-behind children in the classroom of the "home for left-behind children" in Buchen Village of Hexian County, east China's Anhui Province, July 31, 2019. Ye Lianping, a 92-year-old retired teacher in Buchen Village of Hexian County, set up the "home for left-behind children" in 2000 to teach them English lessons for free. As most of the young people work far away, elders and children are left behind in the village. Having no child himself, Ye lives with his wife in a shanty house built 30 years ago, where he offers those children who live far away with food and living spaces. In the past 19 years, Ye has helped more than 1,000 children on his own. Moved by his deeds, volunteers across the country have come to support him in recent years, and he has also received many honors and awards. However, Ye's will is to run against time to take care of more left-behind children. 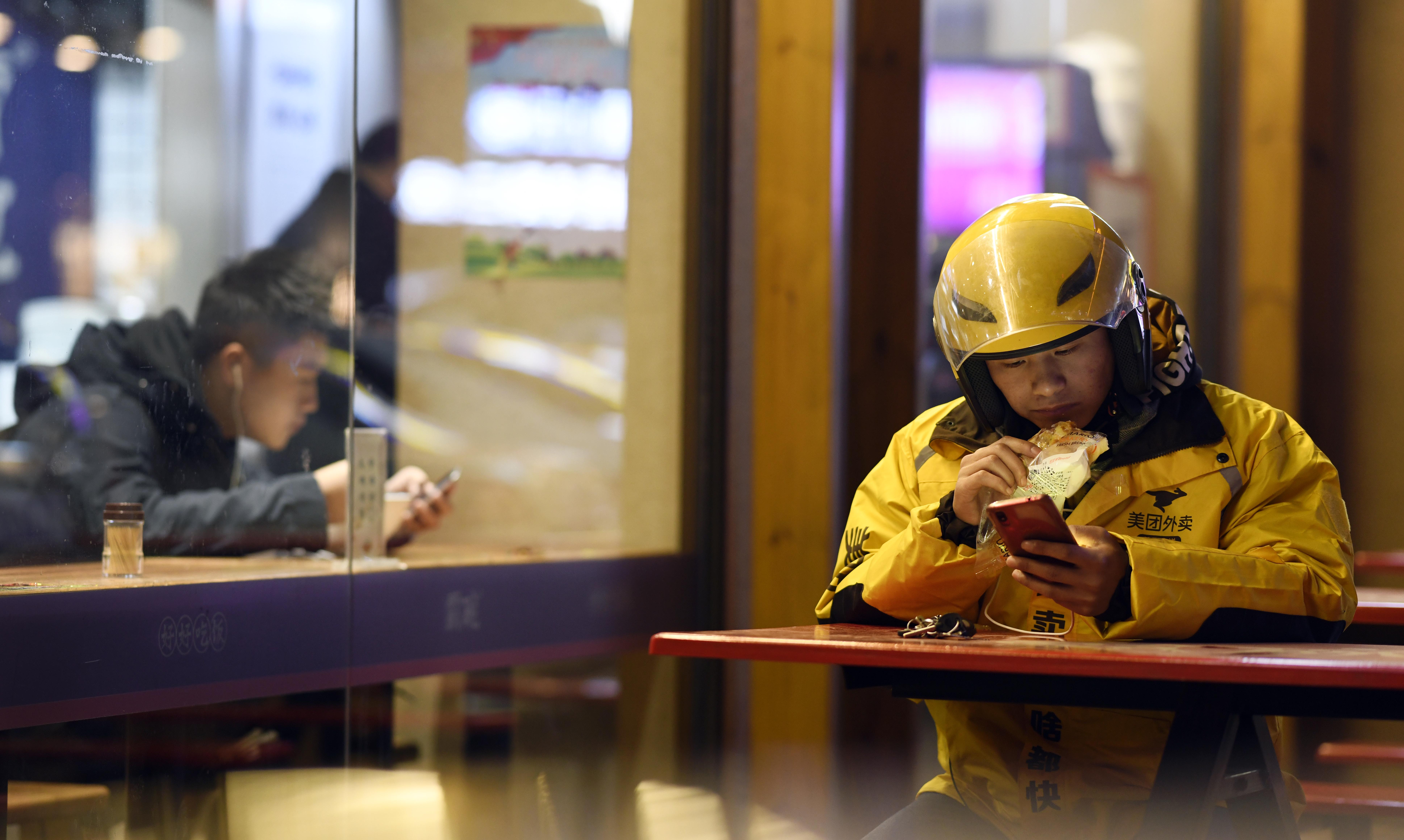