When night falls, the city of Harbin puts on a different face. At the city's Central Street, neon lights outline exotic architecture, showcasing its rich histories and the cultural blend of East and West. Everything seems perfect, except for the cold. For tourists who came for the beautiful northeastern winter scene and ice lanterns on the street, the extreme cold somewhat reduces their willingness to stay out at night. 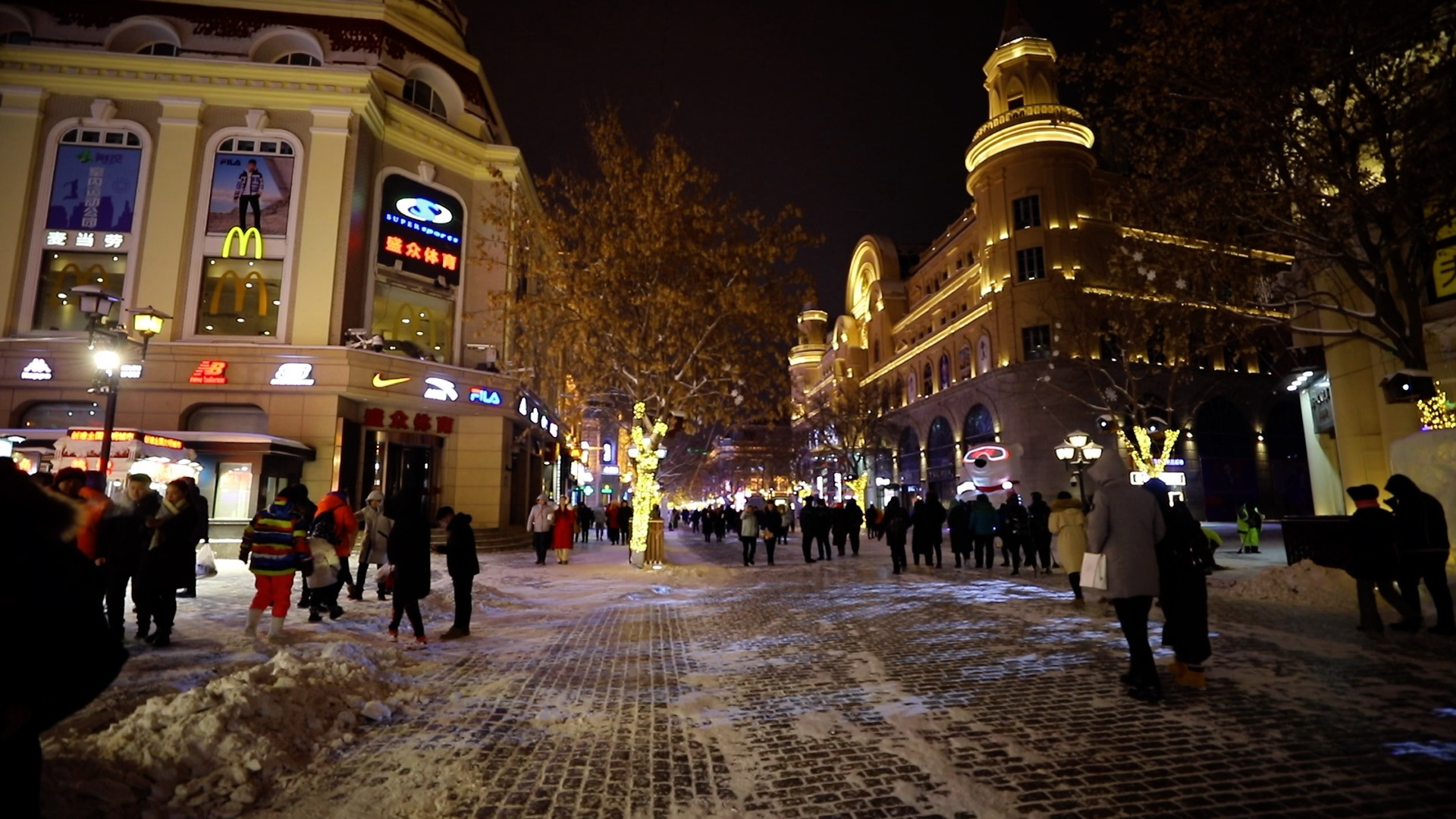 Central Street, an old and charming commercial pedestrian street in Harbin, is now a must-go for shopping and dining. (Photo: CGTN)

While the diverse nighttime economy in major Chinese cities like Beijing and Shanghai continues to thrive in the winter, the northeast remains cold and cheerless. People in this region jokingly call themselves the "winter cat," as they would rather keep warm at home by the fireside to hide away from snowy winter days. For businesses and event organizers here, just getting people to venture outdoors is sometimes their biggest challenge — and therefore a series of efforts have been made to revitalize the city's nightlife during winter.

Some believe Harbin's unique cultural identity can be developed as a magnet for people during night time, as it has been designated a UNESCO City of Music. Xu Xinhao, vice president of Heilongjiang Song and Dance Theater, said the city has been trying to enhance nighttime activities and consumer spending by providing better music and art events.

The theater has also developed strategies to cater to their audience.

"We start with promotion to let the public know more about the shows. And we provide discount tickets and charity performances. Then we make improvements according to feedback," said Xu.

Their efforts are paying back — its recent original musical has been well-received among the general public and is even attracting visitors from outside of the province to see their live performance.

And when it comes to open-air sites, some are realizing that ice and snow can be an attraction rather than a hindrance. The world-renowned Harbin Ice and Snow World, which has been providing visitors with a winter wonderland adventure for over two decades, is making new attempts to drive more foot traffic after sunset.

Marketing specialist of the theme park Sun Zemin told us they had upgraded the lighting of the park and ice structures this year, increasing brightness by 30 percent. Besides, they had also prepared more interactive sports and performances to invite visitors to join in, like group dances, considering that outdoor activities can be really cold. The ice and snow world now draws tens of thousands from home and abroad are to spend their New Year's Eve there despite freezing temperatures.

Throughout the country, more cities like Harbin have released plans and policies this year to increase consumer spending by tapping on the "night economy," which seemingly reflects a city's vitality. The measures include encouraging stores to extend operating hours, introducing more interactive activities like busking performance, and many more.

While experts believe many cities still have a long way to go before fostering the metropolitan kind of vibrant nightlife, those in Harbin are confident that the efforts of businesses and the city will soon warm up the nighttime economy.