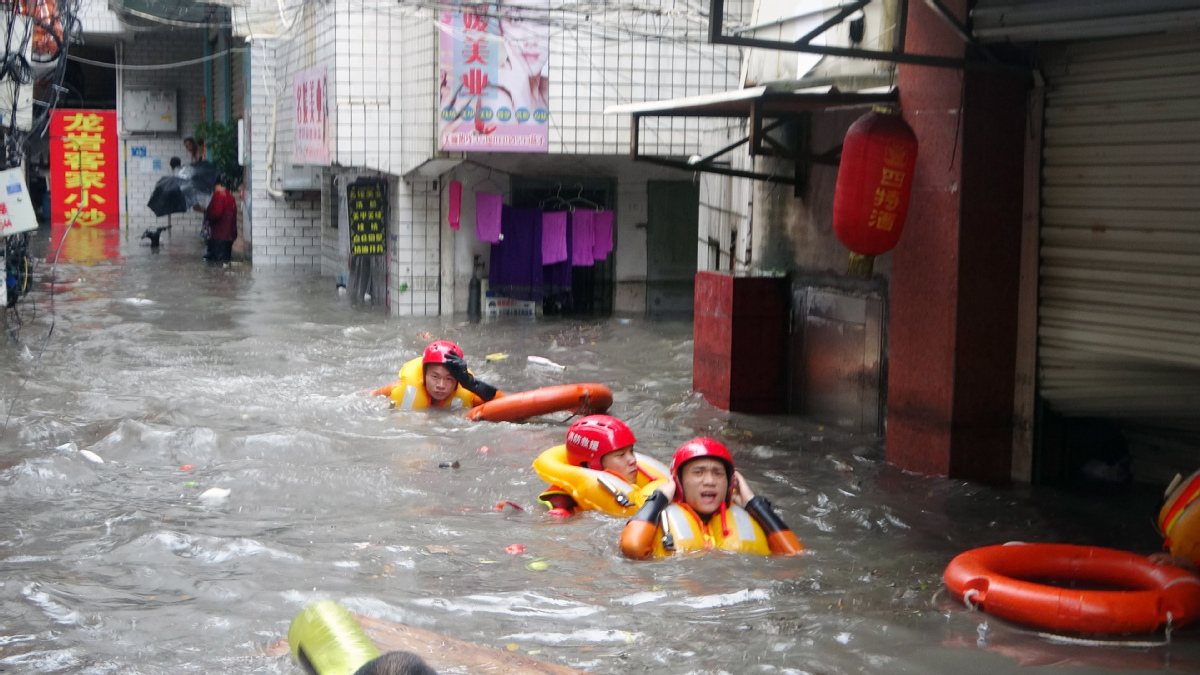 Firefighters are on their way to rescue residents stranded by urban flooding caused by a heavy downpour in Xiamen, Fujian province, May 18, 2021. (Photo: chinadaily.com.cn)

Authorities plan to enhance weather monitoring and flood and drought prevention because convective weather and heavy rainfall that caused several natural disasters this month are forecast to continue.

The National Meteorological Center said that from Wednesday to Sunday, convective weather is highly likely to lead to disasters in South China.

The Ministry of Water Resources said that from June to August, the Yellow, Songhua and Haihe rivers are expected to experience heavy flooding. Meanwhile, regions south of the Yangtze River and parts of the Xinjiang Uygur autonomous region may have droughts.

Parts of East and South China have seen up to triple the usual amount of rain this month, the center said.

Flooding alarms have been triggered on more than 70 rivers in the provinces of Guangdong, Jiangxi, Hunan and Fujian, and levels on two rivers were above those that water conservancy projects designed to prevent flooding could deal with, the ministry said.

By Sunday, floods in Jiangxi had inundated thousands of hectares of farmland for five days and damaged more than 500 houses. The provincial government has relocated about 15,700 residents and sent personnel to reinforce river banks, Jiangxi Daily reported.

To enhance flood prevention efforts, the Ministry of Water Resources said it has placed specific people in charge of 710 large reservoirs and made the list of names public to ensure they perform their duties well.

It added that local authorities have restored 94 percent of the damaged water conservancy projects and prepared emergency response plans for geological disasters under its guidance.

Officers have been standing by around the clock to monitor precipitation, water levels and flooding, the ministry said.

Meanwhile, about 730,000 rural residents across China are suffering from water shortages due to droughts, mainly in the provinces of Yunnan, Guangdong, Fujian and Shanxi.

To combat the droughts, the central government has arranged 200 million yuan ($31 million) of relief funds to ensure daily water supplies.

Wang Wei, an official from the ministry's flood and drought disaster prevention department, told Xinhua News Agency on Monday that the ministry will strengthen cooperation with the China Meteorological Administration on rainfall forecasts and early warnings of disasters.

"We can't rule out the possibility that flooding will worsen, although current flood conditions have not exceeded the level of the same period in normal years," Wang said.