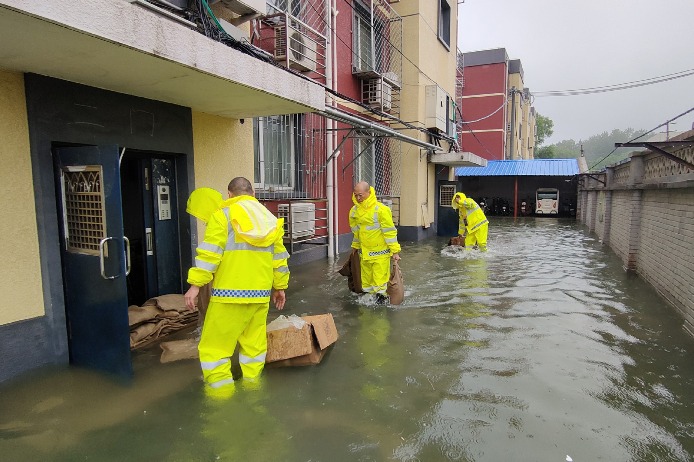 On Monday and Tuesday, heavy rain is forecast to hit Hebei, Henan and Shanxi provinces after battering most parts of northern and southern China, the National Meteorological Center said.

On Sunday morning, the Beijing Meteorological Service upgraded its rainstorm alert from yellow to orange, the second-highest level in the four-tier warning system. The previous orange alert, the city's first for the year, was issued on July 11.

More than 200 millimeters of rain was recorded between 8 am and noon in Beijing on Sunday. The wet, hot weather in the capital is forecast to last until Tuesday, with cloudy days, drizzle and rain and a high of 30 C.

Guo Jinlan, chief forecaster at the Beijing Meteorological Service, said that the rain on Sunday mainly hit the western parts of Beijing.

Dozens of railway services operating in Beijing, or from the capital to cities in Hebei, including Zhangjiakou and Handan, were suspended on Sunday.

Passengers affected can apply for a full refund within 30 days, Beijing railway authorities said. More services could be suspended or train speeds be lowered depending on the weather conditions.

About 100 bus lines were suspended on Sunday, Beijing Municipal Transport said. About 118 sightseeing areas in Beijing's mountain districts, including the Beijing Botanical Garden and the Juyongguan section of the Great Wall, were closed, according to the Beijing Bureau of Culture and Tourism.

Jin'anqiao subway station in western Beijing's Shijingshan district was closed on Sunday due to flooding. A video shows water inside the station up to commuters' ankles.

The Beijing Drainage Group dispatched more than 2,000 workers on Sunday morning to check drainage on roads and under bridges.

The Beijing Meteorological Service has reminded the public to be aware of potential land risks, waterlogging in low-lying areas, strong winds and thunderstorms. People should avoid standing near big trees, high buildings or advertising boards during wild weather, according to the service.