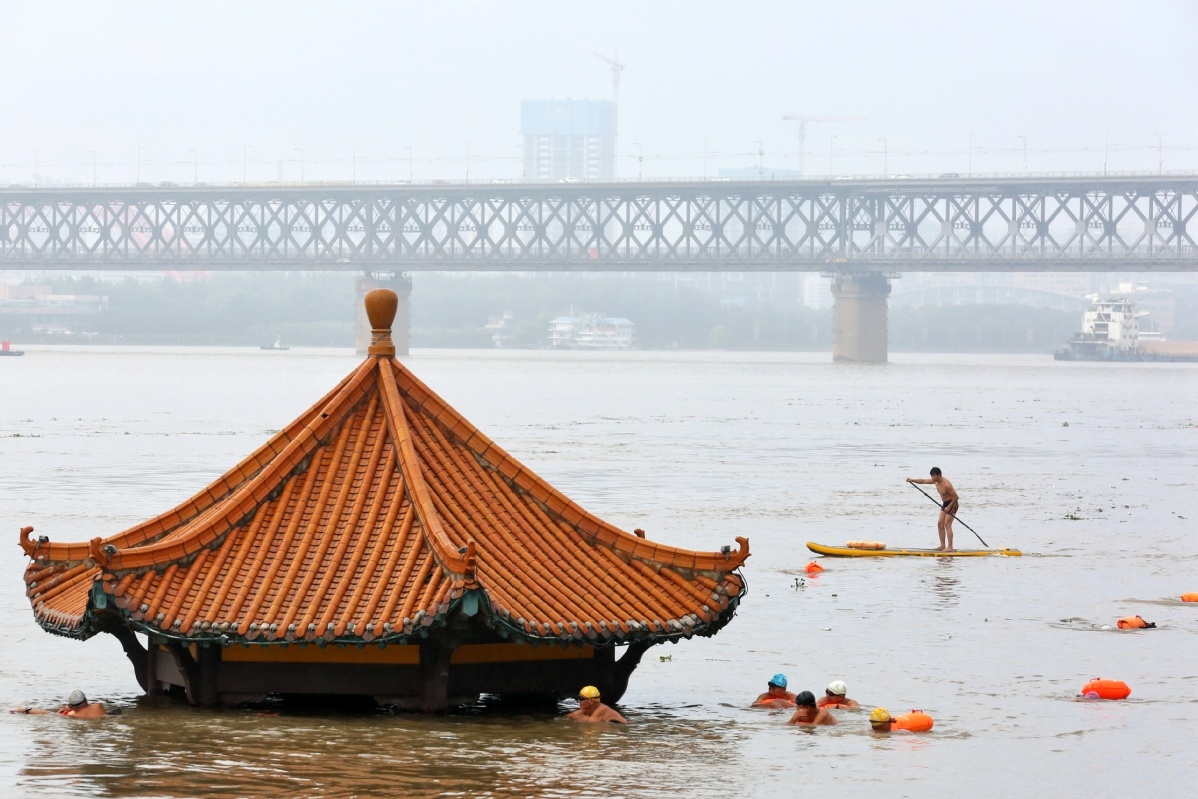 A pavilion in the Huanghuaji area of Wuhan, Hubei province, is almost entirely submerged after continuous downpours in the region. (Photo: China Daily)

More rain is expected across the country in the coming days, following continuous rainstorms that have battered South and East China and caused flooding and other geological disasters over the past month, according to the National Meteorological Center on Thursday.

A new round of precipitation was forecast to hit the provinces of Guizhou, Fujian, Jiangxi and Hunan on Thursday and Friday, the center said.

The center elevated its alert for rainstorms on Tuesday from blue, the lowest, to orange, the second highest of the rankings, and issued orange alerts for three consecutive days.

In Jiangxi, sustained rainstorms had affected nearly 1.8 million people by Thursday, leading to 1.24 billion yuan ($177.5 million) in direct economic losses, according to the local government.

A landslide in Huangmei county, Hubei province, trapped nine people after precipitation reached over 200 millimeters on Wednesday. All nine were found by Thursday, but only one, an 81-year-old woman, survived.

Part of the problem was that the ground was already saturated in some areas when recent rains hit. Between June 1 and Tuesday, six rounds of heavy rainfall occurred in the middle and lower reaches of the Yangtze River with an average 346.9 mm of precipitation, the second-highest rainfall since 1961, the center said.

Some of the heaviest rain fell in areas along the Yangtze and Xin'an rivers, according to Chen Tao, chief forecaster of the China Meteorological Administration.

The dam on the Xin'an River in Zhejiang province opened all its floodgates for the first time in 61 years, releasing floodwaters at 7,800 cubic meters per second, according to the provincial water resources bureau.

"Weather systems such as a subtropical high were stationary over these regions, which caused continuous rainfall. Meanwhile, a strong monsoon system transported a lot of water vapor, which added more rain to the areas," Chen said, adding that runoff from high terrain in some cities near the Xin'an River worsened floods.

Bao Hongjun, a meteorologist at the center, said the precipitation this year along the Xin'an River was much greater than in normal years.

"From May 29 to July 8, total precipitation along the river reached 986 millimeters, more than twice the average in previous years.

"In the next three days, rainfall in the Xin'an River Basin will continue and locals should pay special attention to guard against geological disasters in their areas," he said.

According to the center, between Thursday and Saturday, the rain belt is moving northward to provinces of Hubei, Sichuan, Hebei, Shandong and Shanxi, as well as Beijing, accompanied by strong convective weather such as thunderstorms.